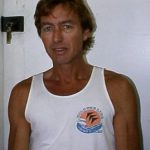 Run on a tighter budget than in previous years the event still attracted more than 50 fliers from 17 countries. Personally, I preferred this smaller number than in previous years as it allowed for more quality time spent with both old and new kite flying friends. The fliers were accommodated in great comfort at Bangkok’s Siam Beverley Hotel where there was never any shortage of delicious Thai cuisine or more western dishes. 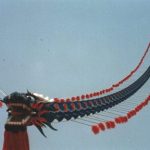 On Friday afternoon our luxury double decker bus whisked us away along elevated expressways, occasionally caught up in the city’s quagmire of pollution-belching traffic, to the recently built Muang Thong Thani Sports Stadium. The venue was completed last year for the Asian Games but presumably there had been no future plans made for holding kite festivals there! The “flying field” was apparently only bulldozed a few days earlier. This was quite easy to believe considering the dozens of pieces of re-inforcement steel sticking out of the dirt and rubble which were to play havoc with multiple bridle lines and fly lines over the next few days. The fliers all seemed to deal very well with this frustrating inconvenience and continued unconcerned. Our introduction to Bangkok continued with a leisurely evening dinner cruise on the Chow Phraya River with more than the occasional beer being consumed.

Saturday morning brought light breezes, enough for kite lines to be tied down allowing fliers to spend a little time in the shade. The sun was scorching and the humidity unrelenting……..this was not to improve throughout the weekend yet the atmosphere amongst the fliers was always jovial. The most repeated word of the festival was “HOT”!!

Late afternoon saw the arrival of an entourage of Mercedes limousines and a Rolls Royce carrying H.S.H. Princess Siriwanwaree Mahidol. Representatives of each country were presented to her as the Thai kite fighting teams took to the field in traditional costume and showed their skill with their chula and pakpao kites. The Bay Area Sundowners impressed the crowds with a superb aerial ballet demonstration under difficult conditions. 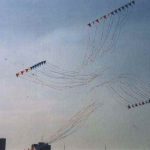 Sunday was tougher than Saturday with only brief gusts of wind from various directions. So brief, in fact, that you could time them with a stop watch. The smarter fliers would time the gusts for a minimum of one minute before venturing out on the field! There were one or two periods where kites stayed aloft for 20 minutes or so but overall it was only the energetic enthusiasm of the fliers that kept the crowd interested. Cornelia and Thomas Roth from Germany showed their superb applique skills with a variety of edo-style kites as the Korean team launched their multi-celled dragons. The colorful della Porta “Elephant” of Gail Wilmer (Aus) was a big hit with the Thai camera crews. Sadly, due to the shortage of good breezes, the fliers were limited in their ability to show off their kites in the air but the tent area was literally brimming with kites!

Our thanks must go to the Tourism Authority of Thailand and Thai Airways for their generosity and hospitality and also to the ever-present Ron Spaulding who, although not directly involved this year, must take credit for building the festival into the event it is today.

Footnote! One night Sundowner Barry Nash, Frits Jansma and I were in a reasonably well lit but narrow street admiring a 10 feet high fully grown elephant. A perfectly sober middle-aged tourist walked straight into its head and trunk, stepped back slightly stunned and muttered… “I didn’t see it!!”

Southern Thailand (beginning of article) … kite is made in the wau bulan style, using layers of cut paper.

bottom left: Superman is a very well known kite personality in Bangkok named for the outfit he usually wears on the field! His serpent is HUGE!