I must have had fun at the convention because I’m exhausted! Susie and I are still trying to catch up from the administrative loose ends, new product ideas, special requests, orders, and a whole slug of emails. Yep — we definitely must have had fun. 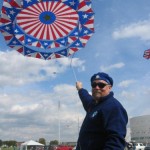 For those of you interested in such things, there were 420 registrants in Dayton. Ninety-nine fliers took part in kitemaking, eleven teams flew in sport kite events, a record number of fighters competed, and the buggy track was over a mile long. The auction raised $29,000. Lam Hoac and Pete Dolphin tied for Grand Champion with the award going to Lam in a tie-breaker. Pete then won People’s Choice.

In an emotional moment, the prestigious Edeiken Trophy was awarded to Don Tabor of Top of the Line. Al Sparling won the Ingraham Award for Service to the AKA. And Charlie Sotitch was given the Lee Toy Kite Art Trophy.

And me? I got the privilege of hosting a banquet in the Air Force Museum Hall of Modern Aviation — on a stage nestled between a Wright Flier and a B-52. Very, very cool. And I have the honor of being elected for an eighth term to lead one of the most creative, committed, and fun-loving Associations in the world…

The AKA convention isn’t about statistics and trophies, and elections. It is really about people. Dayton was an amazing collection of all kinds of wonderful people. If you missed it, you missed a good one. Unfortunately I was running around too much to take a lot of good photos.

For a detailed pictorial, check the KiteLife.com Homepage. The online magazine out-did themselves with daily convention reports. However, there are things the president gets to see that many people miss. So I’m going to tell you a convention story you might not have heard. 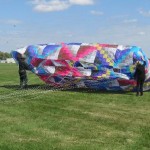 Our dear friend, Peter Lynn, was on the field each day lofting his amazing single-cell foil designs. This is an entirely new, patented kite concept that you’ve seen me talking about on the Update.

The largest kite in the Lynn show was a huge, 800 square foot Quilt. It was a big, solid, hard-pulling kite. In fact, it pulled hard enough to break loose at the anchor point Tuesday morning.

I was on a golf cart on the buggy field when I saw it. That’s way out on the back runway, half a mile from the flying field. Still, it was easy to spot the biggest piece in the sky drifting past all the smaller anchored kites. It wasn’t falling – just floating with the big 75 square foot pilot keeping it suspended. I turned the golf card back toward the flying field and gunned it.

Susan was sitting in the Museum atrium cafe having lunch when a shadow passed over. She knew immediately that something was wrong. By then, I had the golf cart at top speed, racing across the bumpy back field with Dean Jordan in the jump seat and Al Sparling standing on the back and hanging on for dear life. We hit the road and roared to the far side of the Museum. By then we could see that the kite had curiously stopped drifting and was back in the air. 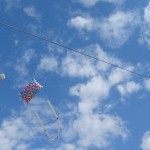 Now this is the strange part. The kite and line had completely cleared the museum roof and was headed toward restricted Air Force airspace. Dragging behind was 200 feet of heavy spectra line. But when the line passed over a telephone wire string between two museum hangers, the end whipped under and suddenly wrapped tight. It wasn’t secure but it was holding.

Peter and a half-dozen helpers quickly reached the new anchor point and stood for a moment looking up at the wire, thirty feet above the ground.

Suddenly, someone found a handful of loose line and tied it to a water bottle. The bottle was thrown over the Quilt line and used to pull it down within reach. And all the time, I’m worrying that changing the angle will undo the wrap. 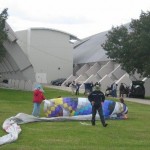 Now the challenge was to retrieve enough slippery spectra to get a solid grasp on the flying line. That isn’t an easy task without gloves when an angry 800 foot kite and pilot is at the other end. Five people held the line and two of us began to walk it down toward the kite. And me — I’m still thinking that the phone line, or the wrapped-knot, or the people holding the spectra are going to give… 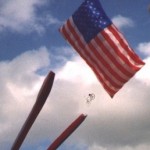 Of course, the kite finally came down. otherwise you would have already heard this story. And later in the day, it was back anchored in the main field.

No one really noticed except that while we were gone, the big flag foil crashed, tangled into a bicycle, and then re-launced itself… Click on the photo and take a look!

Like I said before — it was a wonderful week. And like I said – we’re beat. But we’re recouping quickly. Have to. In six days I go to Germany!