As Kiting editor Mike Gillard and I arrived at the host Hope Hotel on Sunday we were greeted by brief sheets of rain coming down, but it subsided before the night was over… Despite foreboding weather reports, we managed to escape more than the occasional sprinkle for the whole week.

As the early birds gathered in the bar old friendships were renewed and new ones were started. Before the event even officially begins you’ll generally find a mix of the most skilled individual and team sport kite competitors, kitemakers and judges in the country… As Northwest native and competitor Willy Hendrickson said near the end of the convention, “I’ve learned more sitting here in the bar and listening than I have in all my time flying up to now”. If you want to pick the best kite minds in country, I heartily recommend you make the journey out to Seaside, Oregon for next year’s annual AKA convention! 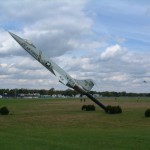 As the day got rolling we helped to move 16 cases of trophies from the host Hope Hotel to where the awards banquet would be held, inside the Air Force Museum on Wright-Patterson AFB… Our elected AKA president David Gomberg and Convention Manager Maggie Vohs were working double time to welcome everyone and get the event started, they did an excellent job of greeting people as they arrived.

The actual event site was located directly across from the museum on the other side a two lane access road. As I surveyed the venue I found that while most everyone was flying on the upwind side of the five separate fields, our oldest attending contestant Gordy Fry (76 in November) was the only one actually training with his Pizazz Plus on the same competition field he would be using the following day… Gordy’s dedication and foresight earned him a 3rd place in Novice Individual Ballet when it was all said and done, proving that this is a pastime anyone can take part in.

Early on it was evident that we were not going to be drawing large audiences, due simply to the demographics of the area. While the museum welcomes quite a few tourists and plane buffs daily, they did not seem to be gathering on our fields… While it was not exactly deserted, I did not see the appreciative audiences found at past convention sites like Ocean City MD, Seaside OR, and others. While the convention is indeed built specifically for the kiters, I’ve always felt that a major showcase like this should be front and center for the public to see in order to monopolize on such an opportunity, expand our ranks and promote our sport… Also, a good audience always seems to elevate the level of performances… With that being said however, this is still very much one of the best events of the year! 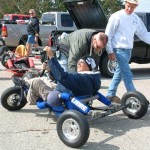 On the other side of the museum buggiers had free reign of an entire airstrip, which brought some of the regulars like Dean Jordan, Keith Anderson and others… I understand the runway was a bit bumpy, but there was plenty of room to complete races on time.

As the Masters Class sport kite teams were warming up, Eric Wolff’s Chicago Fire and Team Cutting Edge seemed to be the main contenders, with Air Zone and Team MVM also working overtime with a National Championship on the line. 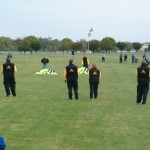 When it was all said and done, the Chicago Fire proved out their nearly two decades of experience with wins in both Ballet and Precision flying Killer Bees with 5 and 4 members respectively in fairly heavy winds, Cutting Edge flew NSRs with 3 members and took two 2nd places using a crisp and powerful style that promises to be a force to reckon with in the future… Rounding out 3rd place was Air Zone in Precision flying Profiles with 4, and Team MVM flew Shivas in Ballet with 3 members.

In the Masters Individual events… Ballet was won by Lam Hoac (more on him later), 2nd went to Ari Contzius and Reid Wolcott took home 3rd with an incredibly fast and hair-raising routine… Precision saw Reid Wolcott finishing in 1st, Shawn Tinkham in 2nd and Russ Faulk in 3rd.

One of the most contested categories of the week was Masters Multiline… Lam Hoac added to his collection with a sweep of both disciplines, Ballet was rounded out with 11 time national champion Ron Despojado in 2nd and Shawn Tinkham in 3rd. Precision saw young Zach Gordon finished a close 2nd with Ulysses Villanueva in 3rd.

Inside the museum, indoor competition provided spectators with a welcome break from the chilly wind… 1st place went to Lam, 2nd to Shawn Tinkham and in 3rd was Scott Weider flying with a Zorro theme.

Proving his versatility, Lam Hoac also entered a beautiful hand made sport kite of his own design into the comprehensive kitemaking competition… Featuring appliquéd dragons and asian characters, this creation earned Lam a number of awards from the comprehensive judges in addition to his Ballet and Precision trophies.

Lam’s quality and innovations in design also earned him recognition as this year’s National Grand Champion, marking the first time a sport kite has earned the prestigous award in all 26 years of the AKA Convention, which has been held since 1978.

As Lam was called to the stage to recieve the award the room rose to it’s feet to give him a standing ovation. Visibly moved to tears, he spoke passionately and simply about the beauty and art we express through single line kitemaking, sport kite flying, as well as his vision of their inherent benefits and future together… Total trophies to Lam, 10 – Dry eyes in the room, very few.

Keep an eye out for the next issue of the AKA’s Kiting Magazine for an interview with Lam, as well as additional festival coverage by Mike Gillard.

Other noteworthy awards include Volunteer of the Year which was presented to Charles Stewart, the Bob Ingraham Award went to Al Sparling and the Steve Edekin award was given to Don Tabor, founder of Top of the Line kites which many argue to be the forebearer of dual line sport kites as we know them today… In the 80s and early 90s he consistantly led Team TOTL with Ron Reich to championships nationally and worldwide.

For complete results from this event, visit the AKA web site… Also, more pictures and daily coverage can be found in our own convention updates.