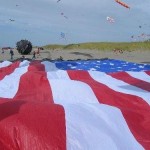 Long Beach Washington this year bosted a really big American Flag that was flown at Long Beach. And when we say “big”, we mean really, really BIG!

The kite was 65 feet wide and 110 feet long and weighed over 100 pounds. That’s over 7000 square feet! So to put it in proper perspective, think how many square feet your house has….

Michael Lin and Robert Yen of New Tech Kites in Austin brought the kite direct to Long Beach from China. It had never been flown and was actually bridled on the field. Throughout the day, crowds gathered to watch and wonder if the behemoth would actually get off the ground.

Now technically, this wasn’t one big kite. The lifting surface was the black border at the front which was sticked, bridled and flown as a huge sled. So the flag itself was more of a tail then a kite. But that’s a technicality only kite purists would worry about. At Long Beach, the focus was on the show and not on the details.

Once the kite was assembled and anchored, Michael, Susie and I organized a small team to assist with the launch and safety. We cleared the sky of other kites, pushed the public back, and then raised the leading edge to generate some lift. 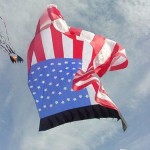 The flag went up and the crowed roared their approval. Across the roadway and down the beach, scheduled activities ground to a halt and all eyes turned toward us.

And then the kite rolled over and fell out of the sky.

We tried two more launches, but it was clear that the leading-edge was flying too flat in the wind. A sled needs an arch for stability. And too many crashes would either damage the kite, or damage one of us!

When I have flown giant kites with Peter Lynn, he has always attached side lines to stabilize the kite, and to better control it for safety. So I suggested attaching steering lines to the two front corners. Susie and I had the honor of anchoring the first launch.

The kite went up straight, shuddered, and then locked in the center of the wind. Whenever it began to lean to one side, we would guide it back into the center.

After 20 minutes of big-flag-flying, we turned the kite back over to the Michael and stepped back to admire the spectacle.

The sight really was impressive. Nearby kites were dwarfed by the immense sail and smaller artkites hundreds of feet down wind were unable to fly in the turbulence. A shadow the size of a football field spread below.

To get an idea of what we’re talking about, take a look at how the stripes eclipse a giant Teddy Bear and Sutton 550 flying nearby.

Eventually we pulled down most of the other large kites and let the flag dominate the field. It would have done so anyway, and we were happy to make space. 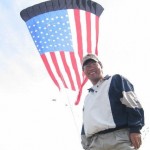 So congratulations to Michael and his team at New Tech for this huge creation. I’m sure we’ll be seeing it again. And thanks for letting us take part in the inaugural launch! Hope you enjoyed the report!

Susie and I are taking the weekend off and doing a bit of catch-up around the house. It is probably about time too! The dogs keep barking at me when I walk in the door!

Later in September I’m off to Marseilles France in two weeks. Then it is Lincoln City, followed by the AKA convention. So I’ll hope to see a lot of you out there. Have fun!!

Please Note: There was one unfortunate note from Long Beach. Several bags belonging to Dale Ray disappeared from the flying area containing a variety of PL kites including medium and small Octopus, Rays, and Gecko. If you become aware of kites being offered for sale, please let us know and we’ll contact the owner. A reward is being offered for their safe return.