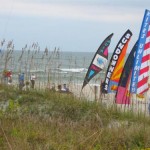 It’s Friday night, and I’m excited. Tomorrow is the 16th Annual Kitefest at Atlantic Beach, NC. Although it was a year ago that I went to my first Kitefest, it seems like such a short time. That was the first time I saw a Revolution, and I was extremely impressed with the acrobatics that it could perform. I watched the Bay Area Sundowners perform their routine in synch to music. Then I took the Revolution lessons that were offered for free at the Kitefest and was surprised that I could actually fly one. (By the way, I now own four of them).

What I have to look forward to tomorrow is a day of fun and excitement followed by a night fly. Then another half day on Sunday. The Kitefest actually runs until late in the day on Sunday, but Patsy and I need to get home, and it’s over a six-hour drive.

The weather forecast is calling for 5-10 mph winds out of the SE and the temperature in the low 70’s, so it should be an enjoyable day. 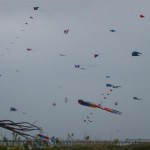 Well, the weatherman was wrong. The winds were a little higher, 10-15 mph. That, of course, wasn’t a problem. However, there was an annoying drizzle virtually all day long. The beach was divided into two main areas for stunt kites and single lines for activities. Then, beyond the divided-off area there were larger areas for those wanting to fly kites rather than observe. At the peak, there were some 200+ people watching and flying. That was before the continuing drizzle sent people off. As I write this in the late afternoon, there are still a few hardy souls out flying some dual lines and quad kites. 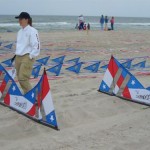 The focus of the Kitefest was fun. There was a kite-building time for kids where they could build and decorate their own sled kites. The Bay Area Sundowners (Jeanette and Mark Lummas, Barry Nash, Gordon Osterlund, Ken Osterlund, and Randy Tom) gave a number of demonstrations to the delight of the crowds. Since the wind was up a little, they flew vented Rev 1.5’s along with stacks of 13 vented Hyperkites. A candy drop brought the younger kids scrambling for the snacks. 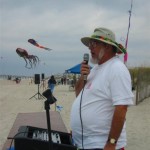 There was a dual-line contest called “Beat the Sundowners” where the contestants were to launch their kite, perform a loop and then land it in a predetermined spot in the opposite side of the window. This was won by Stuart Crum from the W.A.C.K.O.S. (www.wackos.org) from the Charlotte area. I understand that one couple was competing together and when they got to the middle they “met” and now one of them has a vented kite! 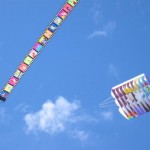 Flying for all of the day was Randy Tom’s parafoil of the wicked queen from Snow White, “Beautiful Evil”. Also Al Sparling’s giant octopus and a couple of Trilobites. “Surprise” the huge kitten delighted the children (and adults, also). Ben Coleman from Go Fly a Kite was there with several of their single-lines. One that I particularly liked was the stacked triangles. Late in the day, Ray Wong put up parafoil of legs with a garter belt – Hmmmmm.

There were fewer people in line for the Rev lessons this year, but several now can count quad-line kite flying as an experience that they have had.

Of course there was a myriad of stunt foils, Revolution quads, dual line stunt deltas, stacks of Hyperkites and Trilby look-alikes. And then the innumerable single line parafoils, deltas, diamonds, boxes, and more than I could have thought of. All sorts of people flying all sorts of kites. When I probably should have been watching events to write this, I was out flying some of my own. Even though the weather was less than ideal, I didn’t see a frown on anyone’s face. It was just plain enjoyable.

In the evening, a night fly was planned. At 8 p.m., things were pretty good. There was a small amount of wind, and no rain. Al Sparling put up his “ghost” foil. And it looked like a ghost, since there was no moonlight. Several people had single line, dual line, and quad kites with blinking and solid lights. Kids were having a great time with the lights attached to their clothes. Then the inevitable happened. The wind dropped and the rain came up. Still in all, everyone seemed to have a good time.

Today looks much better from a weather standpoint. The rain seems to have quit, but unfortunately that’s pretty much the same for the wind. Down on the beach the wind is about 3-4 mph from the SSE (blowing inland). Before the Kitefest gets going, four of us put up our Breeze’s – the wind is custom-made for them. It was interesting to see all three Breeze colors flying at the same time.

The lower wind has had an adverse affect on the big kites. Al Sparling only put up one Trilobite, and the Octopus was dragging his feet much of the day. The large kitten was only up for a while before he wound up collapsing for lack of wind.

Some of the events were a couple of candy drops where the bag of candy was suspended from the beautiful Ray Wong foil. The kids scrambled for the goodies. 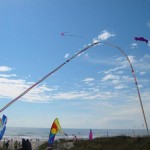 Another unusual event was the display of a huge 440 foot arch made up of four 110 panels about two feet wide. The arch was totally designed and made by Randy Tom. There were colorful rainbow-like panels on each end and then one panel of Disney characters and one panel of flags. We bystanders got a chance to hold one handle on the end of the arch if we wanted. Even in the now 5-6 mph winds, it pulled harder than anything that this novice owns! What a treat!

I got Patsy out for the “Critter mass ascension” where she put up her Ladybug Delta kite. For her participation she got a ribbon. I put up my Bald Eagle for my ribbon. Also got a participant ribbon in the “Softbody kite mass ascension.” Other mass ascensions were for Sky Skimmers and dragon kites. I had to pass on those. 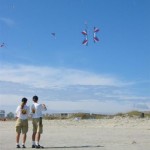 Of course, the Sundowners provided several enjoyable routines with four and six stacks of 13 (today non-vented) Hyperkites. Also, quad routines with two and four flyers (again, today with non-vented Revs). Jeanette and Mark also performed a dual-line routine that was impressive. One routine that was particularly delightful was when Jeanette and Mark performed Revs to Shania Twain’s “From this Moment”.

Kitemaking for kids was a hit again today. All day long you could find kids of all ages flying their sled kites with their custom designs. And flying successfully, too!

Toward the afternoon the temperature got up into the mid 70’s, and with a clear sky and nothing but wispy clouds. Ahhhhhhh. With all the beautiful kites around and enjoyable activities, it was hard to leave. But the 6+ hours of travel ahead of us forced us to leave around 3:30 – 4:00 so I could stop by Kites Unlimited one last time to pick up one last kite (Rev #5).

This kiter will most likely be back again next year.