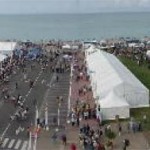 For we kitefliers, the name Dieppe brings to mind a huge international festival sparkling with color, innovative designs, and warm friendships. But at the edge of the field, un-noticed by many kiters stands a memorial to a much different Dieppe. On a similar cloudy morning 60 years ago, six thousand Allied troops waded ashore at this precise spot to confront the Nazis. The result was a grim disaster.

Designed to foster German fears of an attack in the west and compel them to strengthen Channel defenses at the expense of other fronts, the raid would also provide the opportunity to test new techniques and equipment, and be the means to gain experience and knowledge necessary for planning a greater amphibious assault.

The plan was to make a successful ‘reconnaissance in force’  on German-occupied Europe, and then to hold Dieppe briefly. 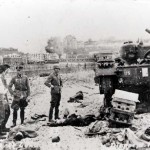 After nine hours fighting ashore, the force withdrew. Over one thousand were dead and two thousand prisoners were in German hands. This was more prisoners than the entire Canadian Army lost in either the North West Europe or Italian campaigns. It was, and is the  bloodiest defeat in Canadian military history.

Behind the failure lay a poor, overly complex plan, insufficient fire support from aircraft and artillery, and inadequate training of troops for their first test of battle. The element of surprise was lost before landings began. Invading troops were caught in a deadly crossfire from cliffs above the city. And supporting tanks were unable to move off the pebble beach as tracks spun helplessly in the round stones.After nine hours fighting ashore, the force withdrew. Over one thousand were dead and two thousand prisoners were in German hands. This was more prisoners than the entire Canadian Army lost in either the North West Europe or Italian campaigns. It was, and is the  bloodiest defeat in Canadian military history. 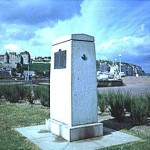 Dieppe was a pathetic failure. Sixty years later, it seems obvious that Jubilee was a bizarre operation with no chance of success whatsoever and likely to result in a huge number of casualties. But in August 1942, British and Allied officers did not yet have the knowledge and combat experience to make a proper assessment of the risks of such an operation.

The true meaning of the sacrifices made at Dieppe was made obvious two years later, when on D-Day the Allies gained a foothold in Europe to free the continent from Nazi aggression. 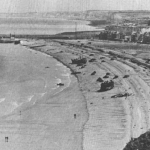 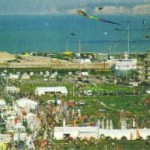 I’ll be returning to France in September, 2004, for the 14th bi-annual kite festival. Dieppe continues as one of the great kite gatherings of the world. It is a source of joy, excitement, and a positive exchange of ideas and cultures from many, many different cultures and nations. The event takes place every two years and in 2002, 35 countries were represented on the field. 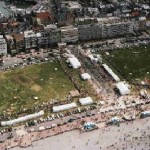 But the cold winds that blow across the stoney beach and onto the grassy flying fields carry echoes of a much different time.