This was an awesome way to finish off my 2003 kite season and was also my 5th year of being invited to participate in this World Class kite festival, especially this year as they were hosting the European Sport kite Championships. 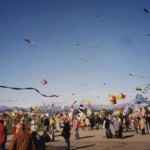 There were over 300 kite flyers participating at this event flyers from England, Belgium, Spain, Italy, Germany, Portugal, Switzerland, Canada, USA and from every corner of France, the food and beverage bill alone must have been enormous with out all the traveling expenses for the flyers that came from wide and far and as always the European kite festivals are always family oriented it is so wonderful to see all the families enjoying themselves just as much or some times more than the kite flyers do.  I just love the way all the flyers and families get together after the days flying, everyone contributes food of every description. 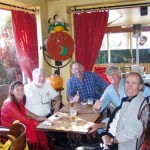 With meats, cheeses, bread, home made cakes and pies, wine and beer, it is a terrific way of getting to know one another, catch up with old friends, and making new ones.  It is also amazing all the single line kite flyers are so willing not just to show off their unique creations but to share with whoever… It is a huge learning school, everyone leaves the festival a lot happier and wiser than when they arrived with their heads so full of new ideas that they can’t wait to get home to put these ideas to work. And what a great environment to bring children up in! I am very proud of the fact that I am known by children from all nationalities as Uncle Ray, As I have mentioned before I have traveled to kite festivals around the world and I

know for sure, as it has been proven to me so many times that kite flying some how brings the best out of people, wouldn’t it be great if we could get all our politicians involved in our sport? Wow!!

Every year that I have attended this kite festival the weather has been fantastic… Alas, this year the weather was rain and strong winds throughout the 3 day competitions, but somehow this did not bother the European sport kite flyers.  They all did their thing just as if they were flying in 15 mph winds, all the events went like clockwork and there were no postponements.  The only people whom the weather really bothered I think were the judges and lines people, but they also did their thing with no complaints.

My hats off to all these guys, the awards dinner was something else with some great food, great company and enough wine to sink a battle ship.  Man, these guys sure know how to party.  And as in other years there were no speeches, raffles or kites to distract any one just a huge gathering of kite flyers enjoying each other’s company and surely a night to remember for a long time. 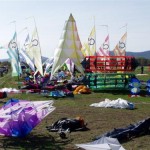 The following day was the 1st of the actual kite festival, and what a great way to start it off sunshine and a brilliant blue sky (the rain and strong winds had gone, in fact the organizer told me that it was especially laid on for the Sport kite championships to sort out the champs from the rookies.

By 10am the festival site was jam-packed with kite flyers and all the equipment with every thing set up and ready to go, the spectators were arriving by the hundreds, but where was the wind?  There was not a kite in the air, there was not even a breath of wind, and the event coordinator came over to me to say “Ray, is it possible for you to start the festival with a multiple kite ballet?”  I said if you give me some help to set up I will give it a go, and before I new it there were a dozen kite flyers there to help me. 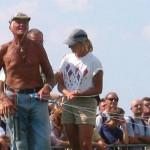 I was set up in no time, Susan Thonstad from the USA (now lives in France) was there to tap me on my shoulder at the first note of my music.  Gimmy Segre from Italy had said it was impossible with nearly no wind, then I said I am going to fly a tribute to my wife and daughter… At that moment I felt a very slight breeze on my bare back and I told Susan to tell them to start the music, at the same time I said to my inner self, come on Lesley and Sonia you got to help me out on this one, I felt Sue tap me on my shoulder, up went the first kite then came down in a dive turning up at the last minute between the other two kites as signal to launch which they did right into a refuel mode.  From that moment on my routine went like clock work right up to the 1-2-3 landing as the music faded away.  Susan told me later that it was a shame that I could not hear the roar and applause of the spectators and flyers as it was unbelievable.  Gimmy Segre came running over to me and said with tears in his eyes, “your wife and daughter was for sure with you all the way”, then gave me a big hug. 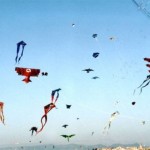 Ten minutes later the wind came up to a nice steady 10mph and the sky over this huge festival site became full of kites of every description… What a magnificent sight, not only the sky, but to see all the kite flyers enjoying themselves to the very utmost just flying and showing off their very own unique creations.  One person in particular I always get a kick out of is Thijo (pronounced Tie O) van Beek, the designer and maker of the Red Baron kite.  He looks more like a wrestler than a kite flyer (I can get away with saying this as over the years we have become good friends, well any way up until now), to look up and see his kite just swaying gently in the air as if it was really flying, then to let my eyes travel down the kite line to this big gentle giant hanging on to the end of this line with a huge ear to ear smile on his face is priceless.

Once again as in other years, the demonstration arena was never empty with flyers from all over Europe, Teams, Pairs and Individuals all demonstrating their skills to the joy and utter amazement to the of thousand of spectators. 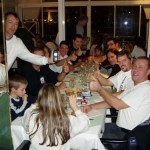 Each evening after the festival we were all wined and dinned just like a big family gathering, great food and wine…  Some times I wonder how we ever made it to the festival site the next morning, but everyone was there bright and early to give everything they have to give and to make the festival once again a huge success, which indeed it certainly was in every respect for the sponsors, organizers, spectators and kite flyers. 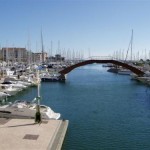 After the festival Isabelle and Gabriel Specht, owners of the Hotel L’ OASIS (where the sponsors have had me staying for the last 4 years) invited me to stay as their guest for as long as I wished.  This was indeed an offer I could not refuse, and I spent a very fantastic and relaxing extra week with them… Talk about being made a fuss of! They wined, dined and toured me, it would be impossible to have been treated any better.  I felt like I had won the lotto!

This was yet another amazing adventure and a perfect way to finish off this years International kite festival season.  It is now time to go home and relax a little before getting all my gear in shape again, ready for 2004, as I have already been invited back again to Berck, Marseille, Dieppe and Frejus also to Cervia Italy.  So once again I like to thank the Office du tourism de la Culture et de I’ Animation of Frejus, Jose Vicent the organizer and his super team of volunteers, all the European kite flyers who always treat me as one of their own, and a very special thanks to my hosts – the owners of the L’OASIS Hotel Isabelle and Gabriel Specht for your hospitality and friendship, looking forward to seeing you all in 2004.