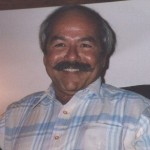 This winter here in the Pacific Northwest we said final goodbye”s to another kiteflyer and all-around great guy Larry Smith. Larry fought a very brave battle with cancer for many months. 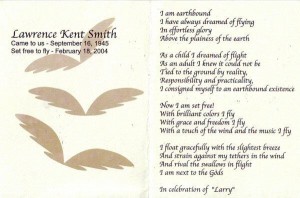 Aside from being a kiteflyer, kite festival organizer, Larry was a husband and kite flying partner to Debbie Smith, They flew as ballet pairs team “Skydreams” here in the Northwest. Larry was a father and grandfather, Larry was a good friend to many of us in the kite world.

I asked Debbie and a few of his fellow kite friends to write a paragraph or two about him, and here is what they wrote, Debbie tells us how it all happened.

We discovered kiting at Brookings by accident. In 1995, We were just at the coast and saw all the going on’s and went to see what it was.It was the Southern Oregon Kite Festival. We continued to visit it for many years always thinking it would be wonderful to have the talent to do this but I thought it was way out of our league. Larry on the other hand had no fear and finally went and bought a $10.00 kite at Big Five. Brought it home figured out how to put it together then took it to a parking lot and learned to fly it and then came and got me and taught me to fly it and the rest as they say is history.

Larry found a kite web site on the internet with a list of festivals and we went to WSIKF we found a world that we could not believe. He went on the net and found a pair of kites for sale that we could afford at that time and bought them. From the beginning he wanted to fly team ballet, Our first pair were ( Buena Vista Feathers), very light wind kites.

Larry started to talk to people on the internet and one of those people was Rod Thrall. He told Larry of the Lincoln City Festival and we went to see it and to meet Rod. As we walked around the beach I spotted a person with a Rogue Valley Windchasers hat on and went to ask them what that was and they began to tell me where the Rogue Valley was I told them that we lived there and they invited us to a meeting. that was in 1999. Our lives changed at that moment. We had found a sport and a group of people that became such a big part of our lives.

In 2000 while we were sitting with our friends the Fabich’s at the hotel in Lincoln City after the days events we began to think that the Windchasers could put together a festival. As the ideas began to fly we got beyond excited and so started the Crescent City Kite Festival. As the years went by we got better as a team and in 2002 we were asked to be flyers at several festivals and now we were part of the talented group we had admired for so long.

The kites we flew most were Super Gulls by Oregon Kite Co.

Larry loved the Bay area sundowners and loved to watch their stacks. He decided he wanted to put together a stack so he found a source for Beatles and started buying them. at last count I think he had 16. He did get a stack of 12 in the air and that is a world record!! (for beatles). There was a picture of them in flight on the Gone with the wind web page for a while.

Larry Smith in one paragraph-

Larry was a teacher and coach and all around great guy.

One who gave of himself totally and unselfishly .

With a “you can do it” attitude all with the don’t-give-up confidence in believing in someone’s abilities.

“Go fly your kite and don’t get your wheels tangled up in your lines.”

That’s our Larry at his best-

Thanks for being a part of my life pal.

Here is a memory of Larry I will never forget.

We were attending the Lincoln City Kite Festival one-year. After a day of kite flying and a night of dinner with our kite flying friends, Larry, Debbie, Lisa and myself joined for talk and a drink behind the Sea Gypsy Inn. It was a beautiful fall evening. The stars were out and the surf was pounding in the background. Larry said “Ya know we have enough talent in our club (Rogue Valley Windchasers) to put on a kite festival. And I don’t think it would be that hard to get started.” We all looked at him and thought “Larry you’re crazy”. But he convinced us it could be done so the rest of that evening was spent brain storming ideas for a new kite festival. Larry presented the idea at our next meeting, a festival committee was formed and the rest is history. That’s how the Crescent City Kite Festival came to be.

Thank You Larry for all the memories you have given us. May peace be with you my friend. We will miss you.

I first met Larry and Debbie at the Southern Oregon Kite Fest in Brookings and from the very beginning liked their zest and love for kiting. I had the pleasure of asking Larry and Debbie to fly a demo for a Lincoln City Kite Fest that I was announcing. Larry said they’d give it a try. So out onto the sand team Skydreams went, flying to the soundtrack to Legends of the Fall. They did great and from then on whenever I needed a pairs team at any festival Larry and Debbie were always there. Larry was always ready to lend a hand at any kite event.