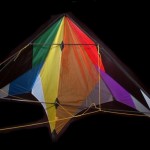 As British kitemaker Carl Robertshaw’s latest entry into the sport kite market, the Fury was a recently a hot topic of discussion in the kite forums… A friend of mine got one from the first batch sent to the U.S. After he had it for two weeks, he was kind enough to lend it to me to do a review. I will start with a tour through the construction of the kite, and then share what I found out on the flying field.

Quality of Construction
The quality of construction is quite good. Sewing is all double straight stitching. There is dacron reinforcement at the leading edge, where the upper spreader crosses the spine, around the center T, at the tail, and at the sail standoff connectors. The sail standoff connector area is also reinforced with mylar. The standoff connectors are covered on the backside of the sail so there is nothing to catch the lines. There is no trailing edge reinforcement, but the kite comes with leader lines and an optional M-style trick line that will keep lines from rubbing on the trailing edge when it is installed.

The LE connectors are nicely covered with the dacron leading edge material. There are no yo-yo stoppers, as the kite comes with a yo-yo line instead.

The sail is tensioned with rubber bands that loop around simple slit nocks. The center-T is a Beeman type with a long neck, and it seems rather fragile compared to the rest of the kite. The center-T on my review kite had already broken once after a lawn dart.

Velcro is used at the tail to tension the spine.

There are large brass weights on the spine — at the tail and at the nose. The kite is quite heavy.

The Fury comes with a nice instruction booklet that shows details on how to assemble and tune this kite. It also covers flying basics and describes a number of tricks. This is one of the most complete and relevant booklets that I have seen for a kite.

Bridle
The bridle is a static 3-point bridle that is made of two lines on each side. One line ties to the spine at the center T and then ties up at the upper leading edge (ULE) connector to form the lower inhaul and upper outhaul. The other line is tied at the lower leading edge (LLE) connector to form the lower outhaul, has a couple of knots along it where the first line attaches, and then continues on as a leader line.

The bridle is adjustable in three different places. You can adjust at the ULE connector to a red mark or a black mark on the bridle line to change the length of the upper outhaul by about ¾ of an inch. Unfortunately, this involves partially untying a bowline knot and retying it along the line at the other mark. This is a little tedious, and I have seen easier ways to make adjustments here, such as a pigtail with several knots along it. You can also adjust where the lower inhaul connects to the lower outhaul and then continues up to the ULE connector. This changes the length of both the upper outhaul and lower inhaul. As one gets longer, the other gets shorter. Again, there is a red mark and a black mark about ¾ of an inch apart, and you have to partially untie a larkshead and re-tie it along the line at the other mark, and again this is a little tedious. The lower outhaul has two knots where the lower inhaul can anchor to change the length of the lower outhaul. This adjustment is fairly easy to make. The manual indicates that these adjustments change the speed of the kite, the spin radius, and the amount of pull.

The bridle includes 29 inch leader lines to protect the trailing edge of the sail during roll-ups. A yo-yo line connects across the two leader lines, but on the kite I reviewed, this had been taken off. From what I have heard, most flyers have not had much success with the yo-yo line and some have even put yo-yo stoppers on the kite. I didn’t have a chance to experiment with the yo-yo line. Perhaps others will.

Design Features and Tuning
The Fury has adjustable leech lines that can be tightened or loosened. At the tail, the two leech lines come together and attach to a line that runs up the spine and loops around the center T. The loop is tied with a slip knot so that you can adjust the length of this line, thereby cinching or loosening the leech lines. When tightened, the kite is quiet and faster. When loosened, the kite will buzz and is slower. I flew the kite in up to about 12 mph wind and kept the leech line tight. The kite was plenty slow and quiet, except for a slight buzz during the tightest spins.

Wind Range
The kite is very resilient to gusts. It likes a lot of wind. It is actually nice to fly in heavy wind, mostly due to its weight. I had no problems flying and tricking in 12 mph wind. I would think that 10 to 15+ mph is a good range for this kite. 5 to 6 mph is probably the low end.

Amount of Pull and Sensitivity
The Fury has a fair amount of pull and takes pretty large inputs, but is quite reasonable given the size of the kite. It is not a sensitive kite. Tricks need to be initiated with deliberation — the kite is not likely to do tricks by “accident”. Unusual Flight Behaviors
The nose wants to sit high in a fade and rise up when in turtle. The bridle crosses the leading edge too far back making fades somewhat unstable. The nose wants to fall back a little when doing a snap stall. Strongest Tricks
Given its aspect ratio and deep standoffs, axels and flat spins are nice. Pancakes and back flips are quick. Snap turtles are easy and balanced, and I could get one lazy susan before the nose starts to rise. Tip stabs from vertical or horizontal are solid; the kite is heavy and easily looses its forward drive. The only issue with tip stabs is that the LE flexes quite a bit. The kite will also land on its back quite easily.

Most Challenging Tricks
Fades can be unstable and hard to control because the nose tends to sit high. Backspins, multi-lazies, and JLs are tricky to initiate because of the high nose and because the bridle crosses the LE too far back so it can choke the kite. Snap stalls take a more careful touch than I would expect because the nose drops back easily and the kite shakes. Side slides loose altitude because of the weight of the kite, so I had to work it to keep the kite from landing part way across the window.

Precision (corners, tracking, speed)
Precision is excellent. Corners are sharp and snappy with no wobble or oversteer. Tracking is very solid and forward speed is slow. It feels like the kite is flying in liquid. This is definitely the kite’s strength. Similarities and Differences to Other Kites
I thought I would compare the Fury to the CdC STX 2.3 Comp and the Blue Moon Mamba, but the Fury is not as similar to these as I thought it might be. These kites feel frisky compared to the Fury and are much more trick friendly. The Fury is a precision kite first, but a precision kite that can pull off the latest tricks. It belongs more in the company of the HQ Tramontana, R-Sky Krystal, L’Atelier Lithium, Level One V-Max or LTM, or even CR’s own Matrix. Of these kites, I only had a Tram and Krystal on hand to compare. The Fury tracks better and tricks much better than the Tram, except for snap stalls. It is quite similar to the Krystal. The Fury has nicer axels and 540s, the Krystal has a higher aspect ratio and is better at the turtle-based tricks like multi-lazies and JLs. Precision between the Fury and Krystal is very similar, perhaps the Fury is a tad better, but I would have to test them side-by-side again to be sure.

Flying Experience
After reading many of the comments about the Fury, I was expecting a difficult kite, but it turns out it was easier to fly than I thought. I was pleasantly surprised at first. Precision is great and axels and flat spins are pretty nice. Corners are crisp and the tracking is very smooth and solid. But then when I got to the fade, I noticed that the nose sits quite high and the bridle crosses the LE back so far that it was hard to control the fade and easy to choke the kite when trying to do a backspin or go into a JL. If I hit it right, the kite would backspin quite nicely, but the kite does not make it easy to initiate the trick. The nose also wants to float up when trying to hold a turtle, do multi-lazies, or when doing a JL making these tricks difficult. If I did get it right, the kite does the tricks nicely, but I did have to get the timing and couldn’t pause long enough to let the nose rise.

I tried adjusting the bridle and tail/nose weights to improve things but to no avail. The factory adjustments marked for the bridle did not make enough difference, and the weights are attached to the spine so tightly that with medium force I could not budge them.

The kite is nice to fly in heavier winds because it is heavy and slow, making it easy to stall and do slack line stuff. I had a hard time getting crisp snap stalls because the nose wants to fall back. It will take some practice. In light winds, the kite is not so great because of its weight. Also, side slides can easily loose altitude because of the weight.

I consider tricks I haven’t mentioned to be average. I was able to do a couple of roll-ups. I didn’t try some of the latest tricks like comets, insanes, wap-do-waps, and superstarts.

Summary
The Fury would be great for a precision flyer or someone that likes a large, slow kite. It is also nice for flying in the 10+ wind range. If you are mostly interested in tricks, I feel there are better kites. This is a precision kite first and a trick kite second. The fade issue makes some tricks harder than they should be. The speed of the kite is quite slow and not very dynamic, so I would tend to not use this kite for ballet.

If you are looking for a large precision or team kite, the Fury is a great choice, and you will have access to lots of tricks as a nice bonus.