“It’s unbelievable! I’ve never seen anything like it before.” That was the mantra of spectator after spectator as they watched Oregon’s first indoor kite festival, held March 24-27, 2004, in Lincoln City, OR. Inspired by the grace and talent of indoor award-winner Penny Lingenfelter of Port Orchard, WA, the Lincoln City Visitor and Convention Bureau decided in September 2003 to host the first indoor festival during spring break, when rain might be sideways and vacationing children might be restless. The rain did fall sideways, but the children and parents sat on dry bleachers in the Taft High School gym and watched in awe. 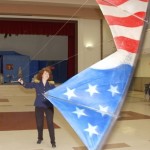 Penny began flying kites indoors with no wind and fans about seven years ago after seeing a video of David Brittain flying indoors. While paying her daughter $5 per hour to pick up the kite during practice, Penny mastered the art and has become well known for flying four-line outdoor Revolution kites indoors. Placing 2nd in the AKA 2001 Grand National Competition for indoor flying apparently was not enough for Penny, who is now working on the art of flying two quads indoors simultaneously. Penny claims “the goal is to make the difficult look easy.” And she does—even from her knees.

Lincoln City’s discovery of Penny led to the unearthing of other unique indoor kite flying talent in the west. Wayne Turner of Tacoma, WA, flies solo and with teams. He was the 2001 Experienced Individual Precision champion for the American Kitefliers Association. He has also placed 5th with a team in international competition. Challenged to make a three-point shot in the Taft High gymnasium, Wayne gently flew his kite to rest on the rim of the basket.

Jeff Reed of Monroe, WA, flies outdoors as well with his gorgeous Classic Illusion, which carries a multi-colored tube-tail. Many thought he was the highlight outdoors at the Moses Lake Kite Festival. But Jeff can also take the breath from the crowd with his whimsical indoor routines. Flying small single line kites, Jeff’s infectious energy captured the audience. Jeff good naturedly announces that he took second place to Wayne’s first place in a recent Pacific Northwest indoor competition. 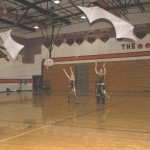 Two of the newest to this indoor art are Lee and Debbie Park, of Aerial Experience, who hail from the LA area. Married for 15 years, Lee and Debbie combine artistic gymnastics and acrobatics with ice skating and now kite flying. Less than two years ago the Parks were watching a contemporary dance show in a small theater in Los Angeles when they saw their first indoor windless kite flying performance. Enthralled by the feeling of weightlessness and defiance of gravity instilled by the scene, they traveled to Madison, Wisconsin and learned to add indoor kite flying to their stunning performances. As Lee is quick to observe, “It’s magical….You can put the kite in any space you want…You can take the tip of the kite and put it in a cup 30 feet away…It’s magical dance.”

And the really good news for Lincoln City and its guests is that all of these fliers have agreed to come back next year, for the festival scheduled March 23-26, 2005. If you want to learn, they will teach you; if you already know how, they invite you to fly alongside them; and if you challenge them to a competition, pay attention. But in any event, don’t miss these graceful dancers stilling the room with their talent, art, and big-hearted performances.

For more information on the 2005 festival, call: