While in many parts of the world, kiteflyers were hibernating in cold temperatures and white fluffy snow, the sky outside my window was clear blue with the temperature already in the mid 80s. The day before, kiteflyers from all over the world arrived after a brief stay in Bangkok and a 3 hours journey south to the beach resort town of Hua Hin. This year’s festival would be a multi site venue in one of the most beautiful countries in the world – Thailand. March 10th would see some flyers participate in Bangkok at the Grand Palace the locals call Sanam Luang.. March 12-14 would see events at the 16th Infantry Division base in Prachuap Khiri Khan during the day with a spectacular night fly on the beach in front of the Sofitel Central Hotel in Hua Hin. 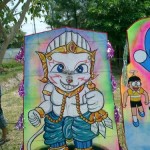 Sponsored by the Tourism Authority of Thailand, this year’s events included a wide variety of kites and something for everybody. “Coloring the Sky” was the theme, and not only did the event splash the sky with color, but in the words of the Assistant governor of the TAT, “Colored the hearts of the people”. The Festival opened to the roar of a convoy of race cars and spectacular fireworks display in which the flags of each country floated down in little parachutes from the pyrotechnics. Traditional paper and bamboo Thai Chula and Pakpao fighting kites were sharing the skies with modern ripstop creations. Single line kites shared the venue with the 2nd Thailand Sports Kite Competition, kite buggies, and 35 baht kites for sale at the event. On another front, kids were making kites in a workshop while on site Traditional Thai Massages were available free for tired flyers. Chilled water and on field lunch boxes kept the flyer’s energy level up in the warm weather.

Kite clubs and teams from China, Korea, Vietnam, Australia, New Zeland, Malaysia, Singapore, Burma, Sweden, and USA, dazzled the crowds for two solid days and nights. Kids were screaming and running in joyful glee as the “candy drop” was introduced for the first time in Thailand (it sure didn’t take long for them to catch on). The sky was filled all day with color, color, and more color.

Saturday night, the awesome “Night Fly/Beach Party” deserved special mention. Staged on the beach with powerful PA system and a large array of stage lights and spotlights, the kites in the sky were spectacularly illuminated and displayed in their glorious colors while a live Jazz band provided musical accompaniment. A large video screen showed event
The Sport Kite Competition was held over a two day period because of scheduling conflicts and wind conditions. 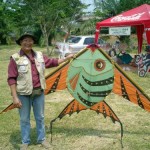 Heralding an international field, the competitors both wowed and entertained the audience, many of whom have never

been exposed to stunt kites. In the end, the winners were:highlights of the day for the party goers and they munched on Thai food served by a chorus of

Food vendors brought in just for the event. A skit in both Thai and English delighted the crowd with a recreation of Thai kite history. With the warm temperatures blended together with this exotic setting, I can flatly say this was the best night fly I have ever attended in the last 15 years of my travels.

As in prior festivals, the day after was a fun day of sightseeing organized by the Tourism Authority. On this trip, we had the opportunity to Trek through Kaeng Krachan, the largest and most remote national park… Even riding elephants around some local temples. After all the work and fun, it was finally time for all to depart. So, when the winter winds are howling and its too cold to fly, don’t despair because the TAT is already planning the next event.

The calendar of official events of the Tourism Authority of Thailand can be viewed at here:

Thank you for flying,