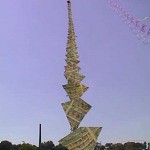 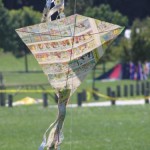 When I wrote the original No Secrets Handbook of Kite Trains back in 1990 (and the original Trains article in the Jan/Feb ’99 issue of Kitelife) I included in the back of the booklet, diagrams of my favorite kite trains as shown in Eiji Ohasi’s excellent book “Kite Trains Making” published in 1981. Sorry to say, my copies of the Ohasi san diagrams left something to be desired. Especially “incomprehensible” were the conversions from the metric measurements of Eiji Ohasi’s. Kitelife’s Editor John Barresi has taken the time to correct those bad graphics (you can click them to enlarge), which I greatly appreciate, and I’m sure you will also!

My favorite, and most numerous kite train shape is the Diamond. Much of that personal preference lies in the diamond being the most recognizable “Kite Shape” to 100% of the non-kitelfiers in the world. The fact that the diamond is also the easiest shape to make might have something to do with that as well. 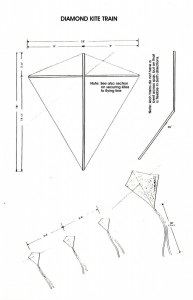 The Arrow Kite Train is more difficult to construct, and when you use the connecting pair of tails to each kite, the flying difficulty increases drastically. (In high wind speeds the individual kites can twist on the line making a “spaghetti bowl” of kites and tails) When the Arrow Train flys correctly it truly defines the term “Aerial Artwork.” 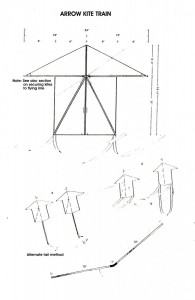 The Lozenge Kite Train has a unique look in the air. The long “stick and brush” tails have an appearance that is unique for a kite train. The main drawback with the Lozenge Train is the rather large carrying case you need to construct to get the train to the field. My box resembles a Guitar case. 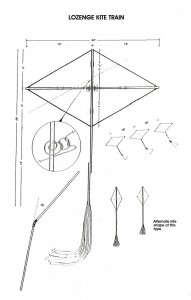 The title “Tricolor” for the Triangle Kite Train is lost in a one color (B & W) diagram. Ohasi-san divided the main sail into three separate triangles of color. (My train is heat sealed Red, Yellow, and Blue mylar) The optical illusion created by the three colors gives the appearance of a totally different shape to the kites (Not flat, but more solid or cellular appearing) 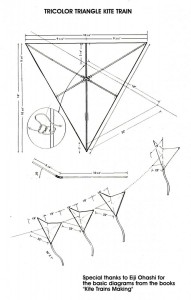 NOTE: In closing I would again like to give a special thanks to Eiji Ohasi for his inspiration (and diagrams) in Kite Trains Making. I believe the original book by Eiji Ohasi is out of print. It was written completely in Japanese and all the dimensions were in metric. I have converted and altered the original dimensions to U.S. measurements I.E. The original Ohasi Diamond kite height was 28 cm or 11 inches U.S. altered proportionately in my diagram to 18″ height for efficient use of a 36″ dowel rod.

Al’s latest Kite train creation is a train of 50 18″ X 18″ diamonds made out of the Sunday Funnies Comic section of his local newspaper. Al calls the train “A Summer of Sundays”

(Special thanks to Eiji Ohashi for these basic diagrams from the book
“Kites Trains Making”, and to Marge Umbarger for the photographs)