Flying kites and the idea of flying with friends has a major appeal to me. I grew up on a farm in Oklahoma, an only child; my only friend was a tumbleweed, and so solitary pursuits like kite flying worked for me. As an adult with grown children and a couple of grandchildren, I rediscovered kiting while visiting the Outer Banks. My wife and I live in the Seattle area and now have several kite festivals under our belt. My daughter’s family lives on the North Carolina coast. We miss seeing our grandchildren, so are on a twice yearly schedule to visit them and enjoy what the Carolina’s beaches have to offer. Now, it goes without saying that there is always a kite or two in our luggage and an overnight at either the Outer Banks or Wrightsville Beach.

While planning this past summer’s excursion to North Carolina, I read an article in Kiting magazine, about the Blue Moon on July 31st. Being the kind of guy that never likes to let an opportunity to have a good time be missed, a special event was needed to mark the occasion. So, let’s see, Blue Moon, I’m going to be on a beach in North Carolina that day, Blue Moon Kites are made in North Carolina by Ken McNeill, see where I’m taking this? I have a few Blue Moon kites in my kite bag and this seemed l like a perfectly good reason to have a kite event. Yeah, that’s it! Flying a Blue Moon Kite on the Blue Moon, sounded like a good idea to me. So I contacted some friends in the kiting community and tossed out the idea. It doesn’t take much to get a kiter to drop everything and go fly a kite. Within a few days the idea sprouted wings and kiters all over the world had contacted me and were going to hoist a Blue Moon on the Blue Moon. Reponses came in from Germany, England, Columbia, Canada, California, Michigan, Virginia, Texas, Washington, Florida, Wisconsin, Missouri, Alabama, Colorado, Illinois, and New York. I was hoping to find some kite flyers from the North Carolina area to fly with that day, so I contacted Scott Gwyn, aka Grumpy. Scott and I previously had conversations about our Ichiban’s, a Ken McNeill creation. Ichiban’s are a beautiful single line kite with a cellular, Cody inspired flair. Ken’s website and most specifically the Ichiban can be seen here: 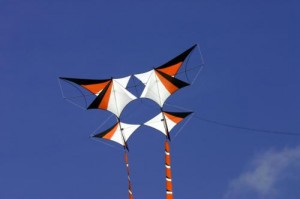 On that particular Saturday, I had figured I’d fly somewhere near the south end of Wrightsville Beach, near Wilmington, NC. From my trips there in the past I had usually come across a few kiters flying in the area, both dual-line and single-line flyers. Scott Gwyn contacted me a couple of weeks before my trip and invited me to join the Wings Across Carolina Kiting and Okra Society (WACKOS) group to fly at Holden Beach. It was an offer I could not refuse. The WACKOS have a reputation of not only having one of the best named state kiting organizations, but also being a great group of kite flyers. This trip and my experience drove that point solidly home.

My wife and I arrived in North Carolina on Friday, the day before the Holden Beach gathering. Weather reports that day mentioned Tropical Depression #1 turning into Tropical Storm Alex. On Saturday morning Alex was born as the National Hurricane Center had upgraded its classification and were predicting it building to become Hurricane Alex within the next 24 to 48 hours.

The day of the Blue Moon arrived and I left my daughter’s house and headed south to Holden Beach . Holden Beach is south of Wilmington, NC off Highway 17, near the Carolina borders. As I was entering the Holden Beach community, and crossed the Intercoastal Waterway bridge, I drove into an absolute downpour. I later came to understand this was my first introduction to what was to become Hurricane Alex. Typical of what rain showers are in this area of the country, it lasted around 10 minutes and the sun again came out through the clouds. Scott’s excellent directions soon had me pulling into the driveway of their house. As I pulled into their driveway, I came upon 6 totally drenched individuals. I was quickly introduced to these fine folks and we all headed across the street to the sun filled beach. The seven WACKOS present today were, Scott and Susan Gwyn, Joe and Linda Smith, Mike and Judy Agner, and Marty Groet.

Upon my arrival I was told that Tropical Storm Alex was causing these rain squalls and to expect them to be coming on shore with increasing frequency. We were soon on the beach and it was time for decisions on what to pull out of our bags. The first big kite out of the bag was a large Patriotic Cody complete with a little line laundry.

The first thing I learned about the WACKOS was their practice of doing everything as a team. This meant set up, to take down, and back to the vehicles. One team started putting back up their banners that had been taken down for the last rain and wind squall, while the rest took part in the assembly of the Cody. Soon after the Cody launch, a the winds piped up and we were digging holes and placing sand anchors. This outing was turning into a mini-Festival.

The next kite out of the bag and assembled was a fantastic 14 foot Swallow and a train of smaller Swallows (see the pictures attached) that flew on the same line as the 14 footer. This unusual train had specially created swivels that allowed each small Swallow to encircle the kite line without causing tangles. Each small Swallow dances around the air and around the line creating a very pleasing effect. This fine train and lead kite were made by a New Zealand kite maker. 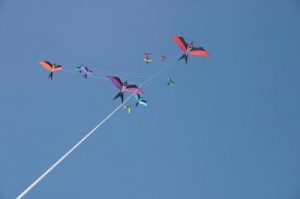 By this time the winds were a steady 10 mph and occasionally gusting to 14 at times. The squalls seemed to be skirting around us, keeping us dry and happy. The skies were dramatic, with bright blues and dark clouds to our east and west at all times. A internet search revealed the average winds on Holden Beach are 8 to 10 mph all year round, perfect for the kite flyer seeking laboratory grade winds. 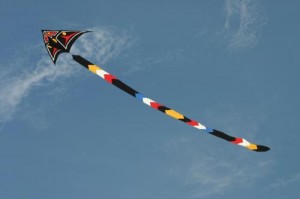 Scott and I decided it was time to hoist our Ichiban’s. Again after a buddy assembly, we attached out tails and raised our kites to the sky. Scott’s and my Ichiban’s are brothers. My Ichiban is #7 and Scott’s is 7.5, the story goes that Scott’s was produced between the dates of the #7 and #8 Ichiban and inadvertently left unnumbered. The weekend before, the WACKOS visited Ken McNeil’s kite making studio in Granite Falls , NC for a tour. Ken officially numbered Scott’s kite that day and it received the official #7.5. Currently I think there are less than 20 Ichiban’s, making them each unique. Ken is still producing this kite, each as a custom order.

Scott and I were hoping to get some pictures of our kites flying together, so I dogstaked mine down and pulled my camera off my shoulder and started snapping pictures. Scott maneuvered his kite for maximum grouping for the photos. Flying Blue Moon’s on the Blue Moon was in full swing, our mission was accomplished.

Note: The Blue Moon occurs at a specific moment in time. A moment before the moon is waxing and a moment after its waning. Our goal was to have our kites in the air at the exact moment of the Blue Moon. The Blue Moon occurred that day at exactly 2:05 p.m. ADT, we were successful in making the timeline and having our kites aloft.

As soon as our pictures were taken and our kites firmly anchored, it was time to get Mike Agner’s Sutton 252 Flowform into the air. Mike and his wife Judy are know among the WACKOS as the Wilmington Branch of the WACKOS. This 14’ x 18’ giant is a real statement in the air. Mike flies this kite with a 6 ball Gomberg Bubble Tube as a drogue and with a large Gomberg Jellyfish Spinner as laundry further down the line.

It was evident that several of the WACKOS and David Gomberg must have a personal relationship. Lot ’s of David’s kites, banner poles, banners and line laundry made an appearance for this mini Festival. Scott Gwyn’s Blue Meanie stayed quietly in its bag for the day and didn’t growl once.

I decide it was time to put one more kite into the air and raised my Peter Lynn Pirate Flag kite with drogue. This kite is new this year and is being produced by Premier Kites. Since North Carolina ’s Outer Banks were home to the pirate, Blackbeard, I felt it was only fitting to raise a pirate flag for the gathering. 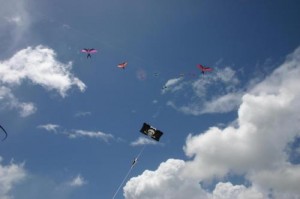 The end of the day came too quickly. For me it was a day to be a kid again, fly lots of kites with new friends, enjoy the ocean and observe some awesome weather. I packed up my kites, said my goodbyes with handshakes and hugs, and headed north up the coast. 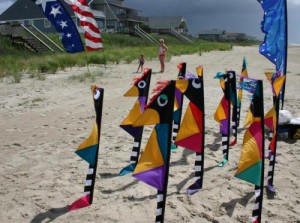 In KiteLife’s next edition, I plan to tell the rest of the tale about our trip to the Outer Banks and my introduction to Hurricane Alex. The Outer Banks has a reputation of being a place that has lured many a person into kiting. I have a few of those folks to tell you about, even some folks you may already know.