It was good to be back. Ada and I have been in Colombia before, two years ago. What changed? Not too much. The people are still very friendly to us. The country still looks great and the nature is spectacular! Even more so when you come from the Netherlands , like we do. Everything higher then 50 meters is a mountain for us. Well, in Colombia everything is higher then 50 meters! Also still the same are the organizers: Ines Elvira, Uribe Uribe, and Jairo Montoya. No, not related to Juan Carlo Montoya, a Colombian national hero. They founded Yaripa, an organization in Medellin , The Ecological Kite Association, YARIPA is a non profit association that works for the ethical and ecological education throughout games, especially the kites and wind games, with the most deprived communities. It considers the environment as the place of reunion of passion, life and happiness.

In the first days we did some workshops in schools, even at night schools for adults. And they loved it! They even listened when I told something! Nobody ever listens when I say something… After getting used to the South American temperatures and altitude, it was time to fly kites again.

The only place in Medellin to fly kites, is on El Valador, a hill in the middle of Medellin. Medellin is a big town, 6 million people, and the town is situated in a long valley, with two hills in it. One of them is El Volador.

In the early days this hill was used as a cemetery for the Indians who used to live there. Nowadays there is nothing left what reminds you of that, only the fact that the local people still fly there kites there. The well-known hexagon is the traditional kite in Colombia , with their beautiful long tails. Most of the kites the people fly are small ones, about 50 cm diameter, but some people make them bigger. None of them bigger then 1.50 meter diameter, as far as we’ve seen though.

El Volador was changed. Really changed. There were toilets! And we did not have to climb the hill all the way no more, there was a stairs now! Not that it was not high anymore… No, even on the stairs it was a huge climb, but still a lot more comfortable. 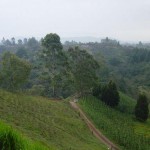 Once arrived on the top, the view was still breathtaking! The whole town on your feet, no matter what direction you look! It really was good to be back… But the space on top of El Violator was not changed. Just enough to fly one, small kite. If you want to fly kites like we are used to in European festivals, you’re up for a surprise in Colombia . Or better: a challenge. In Colombia people fly kites everywhere, and flat grasslands are not available. Nothing is flat in this country. So if you want to fly a kite, you get on your roof, climb a mountain and fly on top, or fly in the middle of the street. For us, spoiled kiters from Europe , this is a shock. How can they do this to me? How can they ask me to fly a kite here? But after the first shock, and you still want to fly kites, you will find a way. And it’s possible – we’ve proved it more then once now. So we flew kites. Jose Vicent (yes, the one from Frejus) flew his Elephant, his nice Roks, with a far too long tail for this place! So he landed that one in a tree, locally know as “the cat-claw”, after he was attacked by one of the local kites. Your own fold, Jose, Roks don’t need tails!

Derek Kuhn from England flew a lot of Martin Lester kites, and so did Stephen Versteegh from Holland, as it was not possible to fly his sport kites on this too small spot. But being a real kiteflyer, he borrowed a kite, and flew that for the rest of the day!

We flew our own kites, and even the Red Baron went up. Wind enough here, on top of the mountain. The wind was not always so stable, so the Red Baron flew a real looping, for the first time in his life. Funny. Derek’s red delta nearly breaks in the wind. Still we had fun there. Even although the crowd tried to get passed the (armed) guards, to have a better look at us… After a weekend of hard work, we had a drink, one of these fantastic, fresh fruit things, don’t ask what it is, just enjoy the amazing taste. Then some food in a place called “El Calendra”, called like that cause the place was filled with… Calendars! But the Colombian food was great, so who cares if half naked women look at you all the time?

The rest of the week they made us do all kind of terrible things, like riding horses in the Colombian mountains, visiting all kinds of small villages, markets, restaurants, bars, and other beautiful things. They even made me drive a “Chiva”, one of the beautiful hand painted wooden busses – you know, the ones with more people on the roof than in the bus? Well, I drove one! They told the driver I am a truck-driver in Holland , and the driver moved over. Did you ever drive such a beautiful Chiva? No? I did! OK, it has nothing to do with kiteflying, but it was fun.

On Thursday we flew to Bogota, where we did two more festivals. The first one was on Saturday, in a big park in the south of the town. We were on the field at 8.30 in the morning, so almost in the middle of the night. The weather was not too good … rain, rain and rain. Wind? No, not at all. What a shame. Nobody there… You can’t blame them. Who goes to see kites in this kind of weather? I wouldn’t!

But, we tried to fly our kites again anyway, and in the afternoon the weather became a lot better. Less rain, a little more wind. So the afternoon was good. More and more people came, more kites in the air too. Dan Eaton from England , who arrived earlier that week, did some really good shows with his huge power kites and mountain board, although there was hardly wind enough for his 18 meter Phantom kite. But for a pro like Dan, that’s a challenge, not a problem. Domingo Leon from Spain flew his amazing Draquel-kite. A big inflatable kite, build after the dragon in park Guell in Barcelona . A real beauty that one is.

We also gave the people eggs. Eggs? Yes, but their kids had to catch them, falling out of the air. Raw. Poor kids. But who cares about them, as long as we have fun! And they had raincoats on. Some kids even did catch one of these eggs, but all of them were winners, and got a medal. Don’t worry, the kids liked it too. There were some real Colombian kiteflyers too, and they brought really nice kites. One of them even made a Cody out of … newspapers! And did it fly? Sure, why not? I never saw a Cody like that before. Sorry, I don’t know the name of the maker. And then this dragon-like kite! Scary, but very nicely made.

On Monday we went to the park Simon Bolivar, for the main event. This is a very, very big park in the center of Bogota . And we fly kites in the arena, a place with was lower then the rest, like these Greek Arena’s. The crowd was huge! Did they all come for us? Seems so. Well, let’s work then. Again the wind was not very strong in the morning, but good enough for the deltas, genkis, and other light wind kites. Again later on the wind was better, and we gave the people what they came for. All kites have been flying, it was a good day. Only for the Red Baron was there was not enough wind, but then the kite is nearly 3 kilos. So I asked for a motorbike, got one, sat on the back with a line in my hand, and told the driver to drive. Not too fast! Slower! Yes, that’s better. Maybe I better not wrap the line around my hand next time… Everything for a good show. And the Baron flew! The crowd loved it, standing on their seats. But kiteflying is so popular here. If you make a line on your hanky, and get it more then 3 feet up, you’re a hit in Colombia.

Jose, Domingo, Dan, Derek, Stephen, Ada and I had a great time here!

Ines and Jairo, thanks for a great festival, maybe till next year?

Search for the wind, and you’ll make great friends!