The 17th Carolina Kite Fest was held October 23rd and 24th, 2004 at A Place at the Beach in Atlantic Beach, NC. The event was hosted by Kites Unlimited with Master of Ceremonies Don Dixon of Kites Unlimited. The MC activities were shared by David Gomberg at times to give Don a break. Don gears the event around fun, particularly for kids. And fun it was!

Saturday started out a little blustery, with winds over 15 mph from the north and the temperature in the low 60’s. BRRRRR. Unfortunately, when the wind is from the north, it’s blowing directly from the land out to the ocean, disturbed by both the sand dunes and the condos, but that didn’t stop us from having a good time. As the day went on, the temperature moderated into the upper 60’s with a bright blue sky, but the wind didn’t settle down until late in the day.

The distinguished visitors to the Kite Fest were the Bay Area Sundowners: 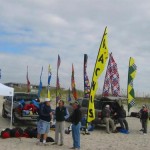 There was a large contingent of WACKOS (Wings Across Carolina Kiting and Okra Society), including outgoing Region 4 Director Jim Martin Jr., and incoming Director Mike Aigner. They set up camp at the far end of the field and launched some ghosts and other single line kites. It was good to see the dozen or so members.

With the wind blowing over the ocean, and with higher winds, there is always the chance that a kite will get lost, and it happened to two or three people. A kind fisherman brought one of the kites back. We’re not sure about the others.

Along with the mass ascensions and demonstrations by the Bay Area Sundowners, there were lessons on how to fly a stunt kite and lessons on how to fly quads. The students ranged from folks past middle age to young kids about 5 or 6 years old. You can imagine the grin on the face of a kid when he can launch and fly a Revolution kite by himself !?

Unfortunately, this kiter had a great time at the Kite Fest, so I didn’t take great notes about what happened when. Nor did I take a lot of pictures, but I’ll try to give you some information about a truly enjoyable time! 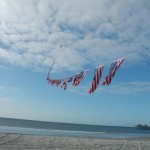 First of all, the big kites. With the wind blowing over the ocean, not a lot of big kites got launched. There was the large octopus and “Surprise the Cat” from Kites Unlimited. Additionally, Al Sparling had a pilot kite with a string of American Flags on the line. Also, a number of large Deltas and Suttons with assorted line laundry attached were launched by participants of the Kite Fest.

The Kite Fest started out at 10 a.m. with kite-building for the kids. For a couple of hours kids were able to decorate their own sled kites and fly them throughout the day. Every one that I saw really seemed to enjoy building them and they were rather proud of their creations. In talking with Patsy, who worked with the kids for the two hours, it seems that they put together some 50-60 kites for happy kids. While the kids were decorating their kites, there was a mass ascension of soft-body kites. Flying was everything from small parafoils to a small Sutton and a parafoil “leg” kite.

Next, the always-enjoyable Bay Area Sundowners flew their stacks of Hyperkites. The four team members flew stacks of 13 kites each in patriotic red/white/blue colors. With the wind up, occasionally one of the members would lose their footing, but they still continued on, not missing a lick.

The next event was a candy drop. Unfortunately, some small stuffed animals were also put into the candy drop bag, so the candy wouldn’t release very easily, but some very happy kids took home a couple of cute teddy bears. And after it did drop, it was all quickly scarfed up so there wasn’t any candy left on the beach for the sea gulls (or us older folks). 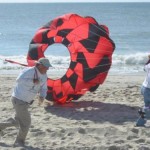 The Running of the Bulls (Bols) was next. Yours truly ran the event (twice). I was helped with the second run by Brett Dixon of Kites Unlimited. When Don announced the winner, he even mentioned “The two old guys won.” Really now! I didn’t think my age showed that much! The Running of the Bols was a rather popular event, and was run by groups of two or three, and singles a number of times.

The box and cellular mass ascension brought out “regular” box kites, cubes, and even as a stretch, Delta Conynes (box delta?).

The Art Kite mass ascension gave the chance for people to see some of the beautiful work by Ray Wong, Randy Tom, and others. A number of unusual, original, Roks were flown.

A mass ascension of “critter” kites brought out a number of unusual kites, ranging from special, custom kites to the inexpensive ones from the discount store. There were ladybugs, eagles, dragonflies, octopuses (octopi?) and just about any other critter you could think of such as frogs, cats, etc. Quite an assortment.

Later in the day, as the beach got narrower from the high tide, the demonstration field was opened up to a stunt kite mass ascension where a number of dual-line kiters flew and then later to anyone at all, where the kids brought out their hand-decorated sled kites, a couple of cubes, a “Strawberry Shortcake” diamond, and a large variety of delta and cellular kites.

We finally broke down the field about 4:30 p.m. to prepare for the night fly.

The night fly was at 8 p.m. With the wind moderating a little, down to around 10 mph, and the tide having gone out some, it made the time a little more enjoyable, even if the wind was still blowing off the land. There was good moonlight, and quite a few people showed up. The Sundowners even gave a couple of performances with the lights twinkling on their dual-line kites. The winds steadily dropped, and by about 10 p.m., were down to 5 mph or less. However, as I write this at 10:30, there still are people out on the beach flying.

The next morning again started out cool, with temperatures in the low 50’s. Double BRRRR! Yes, here in North Carolina, some of us are kinda wimpy. The wind was considerably lower, around 5 mph or so, and it was drizzling some.

Don made a valiant attempt to get the Kite Fest going again, but spectators were few and far between. Most of the people on the field were just the participants themselves. First there was an open fly with a few people trying to put various light-wind kites up, followed by a fighter kite mass ascension. The fighter event drew about a half-dozen brave people. Since it was raining some, none of the fighters were the paper kind, or they wouldn’t have lasted long at all!

Since it didn’t look like the rain was going to let up at all, the temperatures were still in the 50’s and there were almost no spectators, the rest of the events were cancelled. Unfortunately the day’s events ended about 11:30. We still had memories of a fun time on Saturday, and those memories will carry us until next year.