Fifteen years ago, on my first trip to Japan, Susan and I were privileged to participate briefly in the annual Hammamatsu Kite Festival. For over 400 years, neighborhoods have gathered in May to challenge each other with large, rectangular fighting kites. The teams are supported by flags, cheerleaders, marching bands and assorted hangers-on as they march though the streets to the kite fields and then begin to fill the sky with color. Trumpets, drums, whistles, and the hypnotic chanting of the participants pounds the kite rhythm into your head. It is not a festival — it is a kite frenzy.

I’ve just returned from a weekend in Hammamatsu. It wasn’t the full-blown celebration which is traditionally held in May. But it was still one heck of a party. Over 1200 fliers were registered. That’s more then four times the number at an average AKA convention! Amazing!! 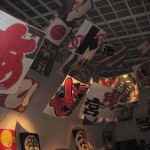 Our small team gathered in Tokyo as guests of the Japan Kite Association. The group included Peter Lynn and Jenny Cook of New Zealand, Meg Albers of Buffalo NY, and Lutz Tresocks of Germany who had been asked to bring the Mega Ray.

I arrived in Japan at four, reached my hotel at six, and by six-thirty, had taxied over to Taimeken Restaurant for a tasteful reception of JKA officers and international guests.

Taimeken is owned by JKA President Masaaki Modegi and the top floor holds the renowned Japan Kite Museum. As the party continued, I snuck away to the deserted museum to catch my breath and savor the new displays. The museum is like a kite shrine, and private time there is a special experience.

The “Bullet Train” left Tokyo Station early the next morning. We enjoyed a brief visit to the Hammamatsu Kite Museum, inspected the kite fields, checked into our hotel, and then headed for the formal welcome party.

A welcome party in Japan includes speeches, the traditional cracking of the sake cask, toasts, entertainment, and a meal. The informal part includes catching up with friends, struggling to speak or understand Japanese, and dealing with the throngs who constantly top off your beer glass and then encourage you to empty it again with them.

Just when you think the party has peaked, the flags arrive, the trumpets sound, and hundreds of happy kiters begin to march around the room. The local president, the JKA president, and yes, the visiting AKA president are hoisted onto shoulders and carried through the isles.

Japanese festivals are a model of Japanese efficiency. They start early with speeches, you fly, and then it all ends with a flourish and everyone goes home. The whole thing takes about six hours. I actually think we spend more time drinking the night before!

Our first project was to get the Mega Ray off the ground. The kite arrived packed in five big compression bags and needed to be assembled. Fortunately, there were plenty of volunteers to help with the lifting and sorting.

The traditional Hamamatsu kites are square with a long extended bamboo spine. The spine is useful for stabilizing the kite during a launch, and also for dropping down on opponents during an engagement. It is also good for skewering inattentive civilians who make the mistake of wandering onto the field…

Kites are delivered in trucks, with each team receiving several pieces of different sizes for different conditions. The teams also use elaborate reels for their heavy flying line. All of the line is produced centrally and distributed to teams so they all compete with the same materials.

With JKA members in attendance from throughout the country, the local kites were relegated to one end of the field. The MegaRay dominated the far end and a stunning variety of traditional kites filled the center. Each part of Japan has their own indigenous design, varying in size, framing, and shape.

Winds were light most of the day which made for less-than-perfect flying condition. But that also allowed more time for touring the club pavilions, visiting friends, and viewing the kites up close. 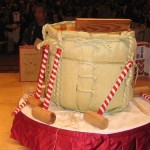 Sunday night we gathered with festival organizers for a private Japanese meal and an exchange of gifts and gratitude. Then early Monday, we were off again by train to Tokyo and a transfer to Narita Airport. The flight home was a mere nine hours.

We’re now hard at work preparing catalogs for January and competing work on the new GKPI warehouse. Our next scheduled outing is Susie’s Surprise Birthday Trip in early December. Woohoo! No baggage!