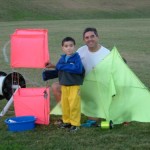 My name is Bob Moore, I live in Sydney, Australia and have been flying kites intermittently for over 40 years. In the last four years I have had the more time and money to pursue my hobby which is high altitude kite flying.I am planning an attempt on the world altitude record for a single kite on one line.

The current record is held by Richard Synergy who flew to 13,609 ft above ground level in Ontario, Canada in year 2000. My target is 18,000 ft but I will be happy with 15,000. It has been ratified by the Guinness Book Of Records. For the last 2 years I have been testing various designs at low altitude (2 – 3,000 ft) and using a variety of materials and construction methods. Two weeks ago I completed a week long test session in a remote part of Australia.

The testing was plagued by difficulties culminating in a splice separating in the Spectra line (US factory splice!). The kite was at about 7,000 ft and drifted for over 7 miles before the line snagged a tree. I managed to get the line secured to the winch and got the kite down to 1,000 ft or so then the line broke. The kite was lost for a week in thick bush. A few days later, I hit a kangaroo at 60 mph, damaging my car substantially. The kite and GPS was found a few days ago by the station (ranch) owner. 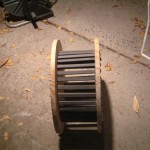 Despite the hot weather, flies and the loss of 2 GPS units, I managed to fly several kites to 4,000 ft +. I have various small to medium deltas, Conyne Deltas and Hargraves Box kites ranging from 10 sq. ft to 127 sq. ft. The best performing kite for its size has been a winged box of 25 sq. ft. The winch consists of an 18″ diameter reel driven through pulleys by an electric motor supplied by a 2 kW generator mounted on a box trailer. The line is 10,000 meters (33,000 ft) of 0.7 mm diameter, 200 LB Spectra. There is an onboard GPS unit which measures position within 1 meter and altitude within 10 meters. The data is downloaded into a laptop where it’s flight is displayed in tables and graphs. I will also have 2 theodolites and a surveyor to verify altitude. 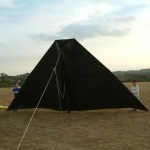 At the recent tests the 12 sq. meter (127 sq. ft) modified (full cell) Conyne Delta I intend to attempt the record with, flew at an angle of 52 degrees at 7,561 ft AGL. The line droop was about 10 degrees below that. The maximum line pull was 36 kg or 79 lbs. This kite, as are all my kites, is built from fiberglass tube and Ripstop Nylon. The big black Conyne Delta is 3 kg (6.6 lbs) without instruments and 3.6 kg with. I sometimes use a small drogue to prevent it overflying. It flies in winds from 6 – 30 knots. I recently flew it at the Festival Of The Winds at Bondi Beach near Sydney. It took 4 people to get it back down following unexpected high winds.

I will attach high intensity LED beacons and a radio transmitter next year during the record attempt. I have the cooperation of a local weather station who do daily balloon flights and provide me with live atmospheric soundings. I also have permission from the air safety authority who clear the air space for my activities. There is a relatively narrow window of opportunity which will see the kite fly to record altitudes.

I have studied the atmospheric records for this site and come up with the best time of year to attempt the record. The air temperature has a significant influence on the air density and the lift the kite will generate. There is a sweet spot for all kites where the lift and drag are balanced at the highest angle. For this kite it is 15 knots but it has the widest wind range of any kite I have flown.

The air density drops with altitude and is only about 50% of the ground level density at 18,000 ft. The wind needs to double it’s speed to have the same lift.

Not only that but the line drag is the biggest factor to overcome. The line weight will only be about 8 lb and this is not a problem for the kite to support. The profile of the line has an area of about 60 sq. ft so this means substantial wind drag.

I was going back to the countryside but my car isn’t ready yet. (Kangaroo damage) I was eager to retrieve the kite and GPS from the station (ranch owner’s son) as it has the data that will prove I set a new Australian altitude record. It probable reached 7,500 ft+ while the end of the line was snagged in the tree. It was flying on 10,300 ft of line with minimal catenary at about 55 degrees. It was difficult to see in the sky unless you knew where to look. It has a profile area of about 100 sq. ft, so it is not small! I chose black for the kite because it is very clear on a blue background. However it is very difficult to see from the air as a local ultra light pilot couldn’t find it after it was lost in the bush.

When the kites above 1000,’ the line makes this very high pitched screaming sound which can be heard form a few hundred yards. It’s very eerie. In fact we didn’t ‘see’ the line snagged in the tree but we heard the line and just followed the sound.

I have been constrained by a very cautious Air Safety Authority and that is why I have been flying in a remote part of my state, 400 miles to the northwest, on a 50,000 acre sheep station. This is near a town called Cobar, the center of area renown for copper mines, sheep stations and dry hot summers. They gave me a 14 mile diameter circle centered on a disused airstrip. Trouble is it is very hot in summer and is a long way from home. This narrows the number of sessions I can do. My plans are to attempt the record in the period April 24th and May 3rd 2005. I will have a small team including my older son, diesel mechanic; a professional kite builder and “KiteSite” proprietor; my older brother, surveyor; younger brother, field assistant and some observers including a kite retailer from Queensland, a big State north of New South Wales.

I’ll keep you all posted.