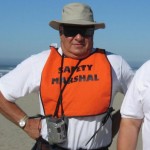 The kite community lost a good friend this Christmas… Dr. Mervin Cooper, longtime treasurer/event organizer of the Toronto Kite Fliers, passed away at the age of 61 on Friday, December 24th from a severe cardiac arrest. Merv is survived by his loving wife Rovena and his son David.

Merv Cooper had been involved in kiting since 1985, doing kite workshops at his son’s grade school. We first met Merv at the Ontario Science in Toronto in 1987 where TKF (Toronto Kitefliers) were helping out with kite displays and workshops. He quickly became an indispensable member of the club. 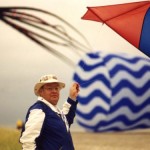 Merv contributed much of his time, helping to organize many of the TKF yearly events, such as “Kitefest”, Toronto’s premier international kiting event.

He had the first kite up on the field and the last one down, always ready to greet and put a kite into the hands of the many children that attended. Merv made sure that there was water and drinks “on ice” at the field and a box of “Timbits” to munch on.

Recently retired, Merv Cooper was a dentist in his professional life and would decorate his dental office with all the colorful kites that he would collect from his travels Always swapping them with the ones that he wanted to fly that weekend.

Over the years, he had been participating in many kiting activities, ranging from single line, arch kites, line laundry and bols to rok battles, fighter kites, kite aerial photography (KAP) and his specialty of mini kite making. He was a long term member of the AKA and contributed where ever he could at each convention. At this years AKA in Seaside OR., Merv was so very proud to actually bring home more trophies this than his close traveling companion, Lam Hoac. (and you all realize how tough that feat would be). 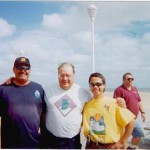 His would also be seen at festivals such as Wildwood, Ocean City, Grand Haven and Dayton to name a few and attended the Kapica KAP trip to Scotland last summer.

He will be missed by the many kite flyers from around the world that had the good fortune to meeting Merv, especially by his close friends at the TKF kite club in Toronto, Canada and many of the local regional Canadian clubs.

Good Winds Merv… We will miss you always.

You can find a memorial page
for Merv Cooper here.