The event was held on Dec, 31st in a new venue for indoor kite flying in the City of Newport, RI. It was coordinated by High Flyers Flight Company as part of Newport’s First Night 2005. The organizers had offered Thompson Middle School, adjacent to City Hall and recently refurbished within the past year, as a location prime for indoor kite demonstrations. This “marriage” made sense since High Flyers Flight Company has coordinated indoor kite shows and kitemaking clinics as a part of 1st Night Providence. This year Newport would achieve its goal of adding a kiting venue for its second annual 1st Night event. 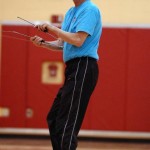 The event was billed in the brochures by the City as “Professional Indoor Kiteflying Demonstrations.” First Night “button” holders could visit any of 14 venues throughout the City. Those who came to Thompson Middle School were entertained by a 30 minute “kite ballet” session each hour. We filled the remaining 30 minutes with an “open indoor fly” scheduled repeatedly over a four hour period. Spectators, who consisted of dozens of families, were able to “mix it up” with the kite fliers and talk about the kites. In fact, we encouraged the crowd to meet and talk to the fliers. 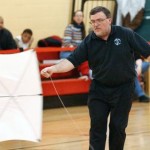 The children tried their hand at indoor kites with the assistance of Pauly Berard. In fact, Paul and several smiling children were seen later that night on the major network affiliate 11PM news broadcast. They ran almost a full minute on the Newport event with the major focus of footage on the indoor venue and happy children trying the kites with Paul. 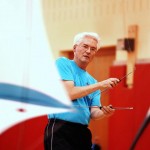 Demonstration fliers consisted of Shawn & Patty Tinkham, Scott Weider, Paul Berard, Steve Letourneau, Glenn Davison, Doug Coates and Steve Santos. They managed to keep this middle school gym bleacher full with standing room crowds. For the fun fly segments they were joined by Region 1 Director and indoor kite fliers, Woody Woods, Jim Stuhler and Tim Perry. There were several fliers from all over New England who came to watch and participate. Kite fliers participated in a street parade later that evening. They would march to the fireworks display over Newport Bay.

New Years Eve day we ran a “High Noon” fun fly at Brenton Point as part of 1 st Night Newport. The weather was awesome with plenty of wind and nearly 50 kite fliers enjoying an unusually warm New Years Day with a sky full of kites. Kite fliers from NYKE, KONE and Connectikiters filled the park. Among them in attendance were such kite fliers as Gary & Maggie Engvall, Jim and Robin Johannesen, and many others. The spectator level was excellent New Years Day since our event coincided with a rare spectacle, a large beached Whale along the very same shore. Folks were lucky just to get a parking spot within the park.

We heard nothing but kudos from folks within the 1st Night staff. There were Newspaper coverage and TV segments highlighting the indoor kite flying. Nothing but good could come of this for promoting the joy of kite flying. Whether indoor or outdoor! We want to thank all of the fliers and participants this year and we look forward to another indoor venue next year. For information on next 1st Night Newport 2006 you can send an email to sparky@buyakite.com for more details.