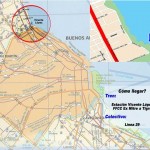 Every now and then, some concept or idea comes along and just “smacks” you between the eyes… and it even happens here at Kitelife, occasionally. Read on, and you’ll see!

We received a “Kite Festival Report” from Gustavo Di Si, down in Buenos Aires, Argentina. At first, the report seemed kind of minimal – in that there weren’t very many words in it. But we took a look anyway, and we found a real goldmine! So we dug a little deeper, and found more precious stuff. By the time we were done digging, we wished like crazy that we’d been in “Paseo de la Costa Park”, beside the Rio de la Plata River in Buenos Aires, Argentina on December 12th. WOW – What fun!!!

Let me start by giving you Gustavo’s report!

2) Mission, Place, Intent of the organizers:

Sport kiting is just starting here, so the mission of the organizer was to promote and develop the Sport Kite to families, particularly to the kids.

This Festival was of special interest to Vicente Lòpez Municipal Secretary of Culture, Sports and Tourism, which supported “Alto Vuelo kites factory” with the arrangements.

The place of the Festival was “Paseo de la Costa Park”, beside the Rio de la Plata River.

The Festival began at 11 AM and finished at 7 PM. It was a sunny and clear summer day with a perfect wind from the river at 10 miles/hour, with the temperature at about 30 degree centigrade. In the evening at about 8 PM, the sky turned cloudy with stormy conditions.

4) Highlights of the day:

The (Public Address) speaker explained to the spectators the main characteristics of the kites, what is sport kiting, where it is practiced, how to fly, etc.

The spectators in fact could be involved in the Festival. There were lessons on how to fly stunt kites for everybody – particularly for children. They could fly kites for the first time, using some of the Alto Vuelo models. (Imagine the grins on their faces!)

Another feature of the festival was a multiple kite demonstration. One pilot flew, for the first time in Argentina, two dual line stunt kites at the same time, all controlled independently. He flew his routine with music and choreography.

After that, some Alto Vuelo pilots flew 5-stacks of “Solo” and 5-stacks of “Viento Norte” model acrobatics kites.

During the Festival, the BATOCO group put up all of its one-line kites, Arches of Eddies, Gigantic Balls (Fugus), Rokkakus, Box Kites, and held a Rokkaku Battle. The most amazing was that they launched “The Big Southern Dragon of South” – 22 Rokkakus (stacked) flying in the air. After that BATOCO group and Alto Vuelo kite factory pilots flew Quad line kites, Helixs and Revolutions.

The Fabuloso Team flew several demonstration routines with “ Alma” stunt kites and ended its presentation flying 7 kites – 4 “ Alma” and 3 “Jaws” in a Mega team. Their routines were flown with music and choreography too.

All the pilots performed with very graceful movements and chose wonderful pieces of music.

5) Personals experience at the event:

From my experience, I believe and felt that kites are an excellent sport for everyone, not only for a few people. (No elitism)

On the one hand, people who practice this sport can develop and improve some skills like: arts, coordination, concentration, imagination, talent, dedication, sharing of ideas, culture and experiences, corps spirit, feelings, technical, etc.

On the other hand, when you see a kite flying in the air you can see the soul of the pilot. The pilot transmits his feelings through the handles and lines to the kite.

Definitely, all participants thought that it was a memorable Kite Festival because we saw amazed faces on lots of people, gained experiences to remember, made new friends, displayed our own kiting activity, showed our true feelings, and we painted the Buenos Aires sky with different colors.

9) Plan for next Year

We hope next year the festival grows enough to invite people from others Provinces of Argentina and from different Countries.

“Alto Vuelo” would like to thank everyone for their assistance, and especially to our distinguished neighbors and visitors who participated in the event.

10) Pictures attached: The best 20 or so pictures of the Festival. I really want to thank you for the chance to make the report to your Magazine.

While it’s certainly short, that report says tremendous things about both the festival itself and the author. I particularly liked Gustavo’s comments about kiting being for everyone (no elitism), and the bit about a dual-line pilot displaying his “soul” with a sport kite. What a marvelous image! I also enjoyed the part where he says flying classes ran all day long, complete with “kid grins.”

Well, given all this info, we just HAD to dig a little deeper, so I went off to the three web sites Gustavo noted in his report.

The first one (Alto Vuelo) is a manufacturer’s site, and didn’t tell me much that would be new to most of us…

The second site (Butoco) was a different story, however… It lists not only this festival, but a whole series of kiting events, including a phenomenal Rokkaku art exhibit at a local gallery and a New Year’s Day fun-fly. The site also included a full schedule of events for the “Wind Party 2004” Festival, plus a fine gallery of photos.

The third site is the web site for “El Fabuloso,” a kite team (actually a whole series of inter-locked teams) that Kitelife profiled in our last issue (El Fabuloso). When we surfed their site, we found some “fabulous” photos, taken at the festival itself.

Now PLEASE keep in mind the comment Gustavo made above: “Sport kiting is just starting here.” Given that, I’ll include what I think are the most interesting parts of my discoveries on the Butoco and El Fabuloso web sites…

Does this just sound like your normal old kite festival to you? Well, what’s truly amazing to me is that all of this festival “energy” was created by a group of kite fliers most of whom have probably never even SEEN another kite festival… Amazing, huh?

Actually – this festival sounded like a real joy! What fun it would have been to help teach the Argentinean children fly kites and to watch the faces of both the participants and the spectators… I’ll bet this festival was just one huge delight after another! I wish I’d been there with my camera! WOW!!!

Now, if I can just wangle myself a ticket to the next one of these…