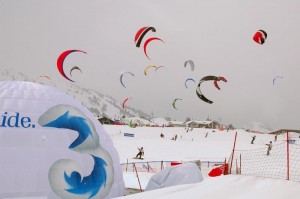 From February 14th to 20th of 2005, sport fans and party people will flock to Obertauern in order to take off and celebrate with the elite of the snowkite scene. During the “2005 3Snowkite World Championships,” national and international stars of this trendy sport will meet for the first time on Austrian ground, to crown their World Champion and to join the audience in the evenings to check out the Obertauern party locations.

For the women and junior participates the real show starts on Wednesday, when first they have to fight for a place in the qualification round before they can relax and celebrate during the evening kiters’ party in Monkey’s Heaven. Naturally, all kite fans are welcome, too. The real Championships will then start on Thursday, when the first finals are held and the first medals will be awarded. Until Saturday, the spectators in Obertauern will be able to watch the world’s best snowkiters do incredible acrobatic tricks and hellishly fast runs. When on Saturday evening all world champions are crowned, then not only the spectators and visitors, but also the athletes can finally let go during the World Championship party at the Lürzer Alm.

The World Championships officially start on Monday, February 14th with an open training session and the World Championship Welcome Party in the Lürzer Alm starting 9 p.m. Lürzer Alm is an alpine fun world which is well known for its legendary parties and its unique style. There, dancing until daybreak is the order of the day. For the athletes, the parties probably ended somewhat earlier, since Tuesday will see the first qualification round for the men. All those who don’t belong to the world’s best and therefore don’t have a guaranteed spot on the starting list for the World Championships, still have to prove their ability there.

For the women and junior participants, the real show starts on Wednesday, when they had to fight for a place in the qualification round before they could relax and celebrate during the evening kiters’ party in Monkey’s Heaven. Naturally, all kite fans were welcome at the party, too. The real Championships will then start on Thursday, when the first finals are held and the first medals will be awarded. Until Saturday, the spectators in Obertauern will be able to watch the world’s best snowkiters do incredible acrobatic tricks and hellishly fast runs. When on Saturday evening all World Champions are crowned, then not only the spectators and visitors, but the athletes too could finally let go during the World Championship party at the Lürzer Alm.

By Sunday at 11 a.m., even the hardcore party animals should be fit again to see the “Hangtime” show contest, where the challenge for the snowkiters is to stay airborne as long as possible between take off and landing – an event which promises a lot of suspense and which is also the perfect ending to the World Championship Week.

All in all, it should be clear to all sport fans and party people that the motto for February 14-20 is: snow, fun, and suspense at the 2005 3Snowkite World Championships in Obertauern. 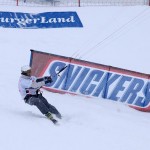 The 3Snowkite World Championship 2005 has officially started this morning with the first two rounds of the men’s snowboard race. Due to heavy snowfall, the program for the afternoon had to be changed to the men’s ski race instead of the men’s freestyle ski. After 3 of the 8 heats of the first round, that race had to be stopped for the day.

Similar to a boardercross, four snowkiters run in a heat for the first three positions. The fourth one is out. The first three of each heat are qualified for the next round.

The following riders have qualified themselves for the next round.

Five heats of the first round still had to be run when the day ended.

The second day of the 3Snowkite World Championship 2005 in Obertauern was a good day for the Austrians.

In the ladies’ run, the favorite, Ike Hodits from Vienna, won the First place. Nicole Prenner from Upper-Austria was Second, and the French girl, Agnes Fontenay, came in Third. Beside a big winner’s cheque, Ike could also take the great World Championships trophy home.

In the men’s category, the Norwegian rider, Bjorn Kaupang, received the Gold medal. Fabio Ingrosso from Switzerland got the Silver medal and Christopher Dons from Norway got the Bronze one.

Due to lack of wind, no World Champions could be crowned today – Roger Knechtle (SUI) and Christopher Dons (NOR) are the first finalists in Race Ski Men – with a very tight program schedule for tomorrow, Saturday.

Today – day 4 of the 3Snowkite World Championships – the weather provided all the possible facets, from sunshine in the morning, to really good wind conditions in the early afternoon, yet in between the event saw many phases of low to no wind.

The first group of today’s round could be run as planned. The second group though – in this heat amongst others Swiss Fabio Ingrosso, one of the top favorites – was started three times but always had to be interrupted due to inadequate wind.

Thus, as of today the first 2 riders for the Consolation Final and also the first 2 riders for the Finals are fixed. Armin von Seeler (GER), who couldn’t meet up with his favorite role and didn’t qualify for the Finals, and Erling Lefsaker (NOR) will fight for the places 5 – 8 tomorrow. The first 2 finalists are Roger Knechtle (SUI) and Christopher Dons (NOR) – and both are curious to find out tomorrow who will be the other 2 contestants in the Finals.

All Austrian expectations lie on Tony Ully, who, as a local, can also count on the support of his home town Obertauern. Fabio Ingrosso (SUI) will do everything to give him a hard time; he showed already today that he’s going for another World Champions title – not in Freestyle Ski like last year though, but this time rather in Race Ski.

Together with today’s postponed races and the still open disciplines, the program for tomorrow, Saturday, is packed. The highlights:

The favorites in the events:

Guillaume Chastagnol (FRA) can count on a Gold medal both in Race as well as in Freestyle on the snowboard. At the women’s – who only start in Race Snowboard – the Austrian Nicole Prenner can, more or less, consider the World Champion title as hers; only a disqualification would make her victory impossible.

The weather forecast (and even more important for the events, the wind) forecast for tomorrow is great, and thus we are expecting a day full of thrilling action.

All contests for today, Saturday, were postponed to tomorrow. Spontaneously installed floodlights would have made night sessions possible, but the schedule start tomorrow at 8.30 a.m. Fun sessions with the kiters and pro boarder Nici Pederzolli (AUT) were offered instead today.

Against all forecasts, the wind just didn’t want to do his job on Saturday. At least it was not windy enough for the profi riders who were going to fight for the World Champion Titles at the 3Snowkite World Championships 2005. It was perfect for trying a snowkite out, and thus even snowboard pro Nici Pederzolli made a kite fly high in the air for the first time.

A forecasted weather front from the West, which should have brought the eagerly awaited wind, made the organizers supported by the fire department of Obertauern equip the whole event area with floodlights. Thus, it would have been possible to run the heats in night sessions. Surrounded by clear skies and bright sunshine, the riders and the spectators alike killed time with all possible kinds of fun activities, let themselves be pulled around the area by the skidoo on snowdecks, rubber wheels, or other tools, or be thrown over the jump by a rope winch. Another part enjoyed the Fun Trophy. At no time was it boring for anyone, even not for the pros, although waiting was the word for the day: “It doesn’t bother me if I have to wait, it’s perfect and easy here,” said Guillaume Chastagnol (FRA). “I was playing around with my own kite today and showed some interested people how to handle it. If there were night sessions today, it would be great because this is really unique – and reminds me of the night sessions in the halfpipes back in the days!” Answering a question about strong riders from his perspective, Chastagnol said, “The two Norwegian riders, Sigve Botnen and Remi Meum, are really good and go full speed. They also try new tricks all the time. Snowkiting is just fascinating. The mix of different sports is what counts.”

In the deck chair viewing spots for the large event area, last year’s Starmania winner (Austrian newcomer songcontest), Verena Pötzl, enjoyed the atmosphere. She wanted to “check it out sometimes” – and she was impressed by the performances, saying, “I haven’t had the guts to try that out until now, although I flew a kite already. A great event, I like it here!”

For several snowkiters the big party tonight will – most probably – not be too intensive since tomorrow, Sunday, the kiters have to be ready and on the hill at 8:30 a.m. The World Championships in the following events are still open:

Despite canceling all of the contests today, Sunday, 3 World Champion titles could be awarded: Race Snowboard Women, Juniors Race Ski Men, and Juniors Freestyle Snowboard Men – 3 medals for Austria, 2 for Norway, 1 both for Germany and France

The weather conditions are the linchpin of an outdoor event – and for the 3Snowkite World Championships 2005, wind in adequate strength is a must as well. Unfortunately, there was no such wind today. That’s why all the remaining disciplines – Race Ski Men, Race Snowboard Men and Freestyle Snowboard Men – had to be cancelled. 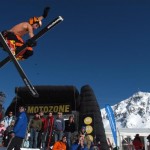 In Race Snowboard Women, the ranking was already clear after the 2 heats on Wednesday. This result wouldn’t have been changed by the final heat. Thus, Austrian Nicole Prenner was awarded the Gold medal, Silver went to her compatriot Ike Hodits, and Bronze to Norwegian Marte Fjeldsgaard.

In the Juniors’ ranking, the World Champions could also be awarded in 2 disciplines. The Juniors did the heats together with the men and, in this system, could qualify for the next round. This is why the World Champions have already been awarded although the contests hadn’t been run to the final end. Vice Junior World Champion in Freestyle ´04, Nico Paflitscheck (GER), grabbed the World Champion title in Juniors Race Ski Men this year. Rank 2 was occupied by Arne Georg Eide Dokken (NOR). In Juniors Freestyle Snowboard Men it was Damien Pattou (FRA) who was awarded the Gold medal, followed by Benedikt Bölli (AUT).

“A great event! The parcours was really good, mainly because the obstacles and their positioning was good.”

“Kiting here was a challenge indeed. Due to squally wind you had to ensure that the kite stays in the air.”

“Only 1 hour before the start of the race, I had problems with my knee again, and so I’m even more happy about my Gold medal!”

“The organization was perfect. It was a hell of a lot of fun competing at the World Championships here in Obertauern!”

“For my feeling the wind conditions were ok, you just had to bring up the kite higher in the air.“

“It’s the first time for me in Austria, and I like it a lot. The fact that I leave Obertauern as World Champion makes me really proud. It was a fantastic event with perfect jumps. Thanks to everybody, it was great!”

Pictures in print quality can be downloaded at www.snowkiting.org
and are free of charge by mentioning the source.

All Press Releases were offered by Irene Walser
and were edited by Kitelife.