Somewhere on the 15 hour journey to Guam, I pondered what on earth I may have gotten myself into. 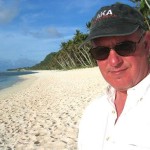 I mean, here I was going about as far as a guy could possibly go and still be in the United States. The whole thing had been pulled together in six short weeks. I was headed for a first time event, with people I’d never met, in a place I knew hardly anything about. I’d travel nearly 20 hours, spend three days on the ground, do a five hour show, and then fly home again.

So on one hand, it all seemed a bit crazy. And yet I had a good feeling.

“Kites and Wishes” was intended to help kick-start kiting on the American Territory of Guam. The event was also designed to raise the profile of Make a Wish — the organization that grants special favors to children with a life-threatening illness. That sounded like a great combination to me. And the people I’d talked with seemed enthused, energetic, and very well organized.

So yes, I had a good feeling about Guam.

Any concerns I might have briefly harbored quickly evaporated as the plane touched down. Before I was out of my seat, airline representatives were paging me to the front where an assistant to the Governor was there to escort me through customs and drive me to the welcome party.

It is always a good sign when you find cookies waiting in your hotel. My beachfront room came complete with a cushy comforter, plush beach robes, free breakfast, and an open bar in the Executive Lounge each night. Guam was off to a great start!

The festival was held on a pristine field at the edge of the Philippine Sea — a narrow strip of white sand, bordered by a scenic row of Palms, and then 500 feet of mowed lawn half mile long. Between the flying conditions, the scenery, and the space, it was an ideal place for kiting. Warm breezes came in straight off the water.

In 1944, 30,000 US Marines had come ashore on this same beach to reclaim the island and faced fierce resistance from the Imperial Japanese. (Click here for a historic photo.) But on this occasion, Japan Kite Association members and the Philippine Kite Team joined local fliers, Ray Bethell and me to celebrate kiting and camaraderie on this historic site.

My first day on the island, we gathered for breakfast, visited the field, enjoyed a huge Jamaican-style lunch, did a series of radio interviews, and then headed to a traditional island fiesta for dinner. A pattern began to emerge. Whatever we did was scheduled around food.

On festival day, we arrived early to set anchors and stake-out space. With a total island population of just 150,000, we didn’t know how many spectators to expect. But as schools began to arrive en-mass and the roadways clogged with traffic, it quickly became clear that a unique event was unfolding before us.

Sponsors and dignitaries were each featured in turn on the podium, and “wish-families” took center stage. Guam’s Congressional representative brought kites from Washington and joined the festivities. The announcer proclaimed at one point that Ray Bethell had the “best off-island tan” anyone had ever seen.

The festival started on time, ran smoothly, and ended five hours later so we could pack up and go eat. In fact, over the course of three days on Guam, I’m pretty sure I ate about 15 times….

I’m fortunate to attend a lot of kite events in a lot of different places. I’ve seen great ones; I’ve seen some that could stand improvement. “Kites for Wishes” was an unqualified success. 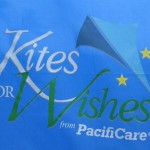 The following day, kites were featured on the front of the local paper and on two full pages inside. Five thousand people had attended — from a total population of 150,000. Make a Wish had drawn major visibility, sponsors were happy, and a firm foundation had been set for kiting in the area.

It is a shame that Guam is so far and expensive to reach from what they call the “mainland”. But a broad kiting culture extends across the western Pacific. Next year, look for kites from Korea, Malaysia, Thailand, China, the Philippines, Japan, and Vietnam. “Kites for Wishes” is at an ideal cross-roads to bring them all together. 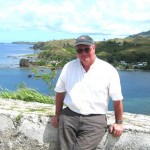 Our final day, we drove the perimeter highway and visited toured historic locations. We saw World War II landing beaches, Spanish forts, and the bay where Magellan reputedly landed in 1529 to discover the island. I wondered how the locals then felt about being “discovered”.

In the afternoon, we lounged and snorkeled on the most beautiful beach I had ever seen. I’d made fast friends in my brief three day visit. I’d seen event goals exceeded and a foundation laid for great things in the future. I’d been part of a perfect festival.

At three the next morning, I would head for the airport and the long journey home. I’d be leaving with a smile and warm memories of Guam. But first, we had to go and eat.