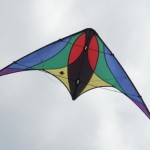 With sport kites getting more and more advanced on the high end every day, it’s always good for the sport and community when a new entry level kite comes along that delivers great performance combined with a great price… Developed during years of kite design experience, Dodd Gross delivers exactly that by introducing the Cherry Bomb for New Tech’s 2005 line up.

Quality of Construction
Unlike so many entry level kites, the Cherry Bomb is heavily reinforced in all the usual places, as well as along the trailing edge – very unusual for a kite of this type.

The solid pultruded carbon frame is put together without the use of any ferrules, which greatly simplifies assembly for the kiting neophyte.

The leading edge connectors were a perfect fit for the spars on the sample we obtained, well balanced between being snug enough to keep the rods in during a crash but not so snug as to make breaking down difficult.

The spine is held in at the keel with a convenient velcro closure, also making attaching and removing the included 30 foot tail totally simple and painless.

Both the top spreader and bottom spreader (one piece each) run through their own heavy duty rubber rings at the usual places on the spine, greatly lessening the chance of misplacing either part both on the field or at home.

The wing tip attachments are tied dacron, with a leech line through the entire trailing edge.

Considering the target market for the Cherry Bomb, we specifically spent a good amount of time practicing high speed soil samples and hard flips on the ground in an attempt to really test the durability… All components held up well, although the stand off attachments on the bottom spreader tend to slide out a little with repeated crashes.

Bridle
There is one basic adjustment on the bridle (up or down), which makes it a great starting point for the beginner to learn about kite tuning, especially since detailed instructions are in the included flight manual.

An interesting note, this is one of the few small beginner kites we’ve seen that incorporates a “3rd leg” in their bridle system. This extends the upper wind range significantly by supporting the middle portion of the leading edges.

Attaching the lines is done with a larks head knot, also explained in the flight manual.

Wind Range
New Tech lists the wind range of this kite at 3-20mph, which we found to be true in our trials… However, with a little bit of applied skill we could still have a great time in even lighter winds.

Amount of Pull and Sensitivity
We’re talking about a 5½ foot kite here, so I don’t imagine we’d see excessive pull in any amount of wind.

As for sensitivity, we found it to be responsive enough to cut basic corners and spin without going overboard… Just enough, but no so much that beginners would have trouble with it.

Unusual Flight Behaviors
The only unusual trait we found was the kite’s tendency to do a reverse roll up in very light conditions (under the manufacturer’s suggested wind range), but it wasn’t overbearing and with a little practice you might even be able to utilize it.

Trick Ability
Well folks, the Cherry Bomb retails in the $35-$45 range and we frankly didn’t expect any more than basic flight ability… Boy, were we wrong!

Within a very short adjustment period we were able to pull off clean Jacobs Ladders, Flic Flacs, Cascades and even a couple of roll ups, although without yo-yo stoppers we couldn’t quite recover it.

Complete with a reinforced trailing edge, even the total rookies can start practicing a good number of slack line tricks for under fifty bucks!

We also found side-slides or floats to be very stable, stalls and tip landings were well within reach as well.

Precision
Holding up well in nearly every area, precision was the only area where we did not end up pleasantly surprised.

While certainly on a par with or slightly better than many of it’s competitors, the Cherry Bomb still turns right angles like an entry level kite.

Flying Experience
Having the opportunity to fly this kite in 0-6 mph during the course of our testing, we had an absolute blast.

We got more than a few chuckles out of this one after pulling off a set of flac flacs or jacobs ladders… Just too funny to be able to pull that kind of stuff off on such a little kite, and not half badly at that.

Things to Look Out For
Referring back to the stand off attachments on the bottom spreader, they do tend to slide outwards after a few crashes but this could easily be remedied with a touch of glue or tape.

On this particular sample, we found that the leech line and wing tip attachment on the left side were tied about 1/2″ too long and came off on several occasions… This was a quick fix though simply by re-tying the knots a little closer to the kite.

Summary
Whether you’re researching your own first sport kite, or one for a friend or family member… This is a great product, is very durable, and will actually grow with you until you’re ready for an intermediate kite.

If you have half as much fun with the Cherry Bomb as we did, you’ll get more than your money’s worth!