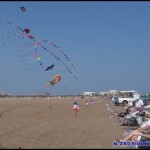 For those of us that live in south Texas the first in our lifetime snow on Christmas is just a distant memory and our thoughts have turned to warm sandy beaches and kite flying. If you find yourself at the southern tip near Mexico in mid February you can be part of the South Padre Island Kite Festival. The annual event officially kicks off the Dual and Quad line flying season in Texas.

As I drove south in the rain I kept picturing the warm sandy beaches filled with thousands of students enjoying their spring break. It took a few min to realize that my thoughts were a few months early. The crazy activities of the younger crowd making the most of their few days of freedom during the spring and the crowds of families in the summer turn into leisurely days of fall and winter with seniors from the cold climates calling the much warmer Texas coast home. As I approached the coast the weather cleared up and the day showed some hope for perfect festival weather.

Driving onto the huge sandy area known as the flats beside the convention center on the bay side of the island I saw a large gathering of kite enthusiasts. Arriving slightly behind schedule I went to work laying claim to a open area and began filling it with single line displays. The area had a United States and Texas flag flying high above the field that was soon joined by other patriotic displays. Before long the sky was filled with various red white and blue parafoils and huge deltas with hundred foot tails and a flag parafoil with its line lifting numerous small flags. The high flyer for the day was a box delta featuring numerous windsocks at 50 foot intervals. P 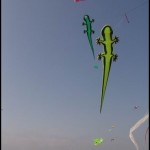 As each piece was put into the air several more observers parked and staked out their viewing area. Many of the Winter Texans came well equipped with lawn chairs and refreshments. One group even set up a grill and served lunch to their group. I thought about joining them as I waited for the invitation that never came. By mid afternoon the field was lined with vehicles several rows deep and numerous spectators being introduced to an aspect of kiting that they never knew existed. On the main field the announcer thrilled the crowd by calling out the winning numbers for the kites and windsocks that were provided by the sponsors. The crowd was kept informed of the activities for the day and given a play by play account of some of the demonstrations along with an explanation of the judging for the competition. A large display of banners added color to the field and soon cases of banner envy were being observed. Kite fliers were taking pictures and making plans for the new banners that they would add to their collections for next years display.

On the single line field a double arch with over a hundred colorful kites and tails amazed some of the younger crowd. A big cat was spotted keeping on eye on a several sharks that had ideas of their own snack. They were trailing a scuba diver who seemed to be unaware of the attention he was drawing. On the other end of the field a couple of geckos kept the crowd entertained. They wiggled their toes and seemed to swim back and forth as the crowd watched and smiled. Members of the public were given a chance to fly the Gomberg Plane and find out that a few extra cheeseburgers help. Every time the wind gusted they had to take a few steps to keep their balance. To show their appreciation several of the fliers returned in the evening to assist in packing up and putting the display back in the bags.

Great weather and a chance to hang out with other fliers made this a memorable weekend. Saturday night’s awards dinner at the Padre Island Brewery was the perfect cap to a long day on the beach. An auction provided seed money for next years festival with items from New Tech Kites and University Sports. A great meal and lots of stories put smiles on the group’s faces and then off to bed to prepare for the second day. Sunday evening I said goodbye to Guy Baltnik and his group of volunteers and thanked them for all the hard work and months of planning that went into the weekend. The sun setting on the final day made it easier to leave such a great weekend behind and start the long drive up the coast to Houston. Along the way plans were made for next years addition to the ground displays and thoughts of other events in the coming months. Hope to see you there.