This was Guam’s very first Kite Festival. David Gomberg and I were very lucky to have been invited to perform at this event to help make their first kite festival a huge success, which it indeed was. It was so well organized that everything went like clockwork. The winds all week were in the 20mph range and the forecast for the day of the festival was for the same, but thanks to Father Mike’s all night prayer’s, the day of the festival was a perfect 8-10 mph wind. The flyers were able to put on a great show to entertain the masses that came to see what Guam’s first kite festival was all about. By the end of the day literally hundreds of children and adults were flying kites, and from the look on their faces of pure enjoyment, it will become a weekend event for a lot of the families.

The Asan Beach Park is a kite flyers dream, big and wide open, so it really does not matter in what direction the wind is coming from, and just like Hawaii you don’t have too worry to much about the weather. The average year round temperature is 77-86 f. The hottest months are May, June, and July. They really have only two season which they call the Wet and the Dry, there is not a snow shovel to be found on the whole island.

This was a premier fundraising event to benefit the Make – A – Wish Foundation of Guam, who grants the wishes of children with life – threatening medical conditions to enrich the human experience with hope, strength, and joy.

It was the first formal introduction of kite flying as an organized sport on Guam. They set their goals to increase public awareness of the Make – A- Wish Foundation and to encourage referrals of children who may qualify as “Wish Kids”. Another goal was to provide wholesome, clean, fun-filled, family-oriented activity targeted at the youth with the introduction of organized kite flying.

The organizers also want it to become a signature event for the Make-A-Wish Foundation in partnership with PacifiCare, and to increase school participation, both public and private, to develop the sport of kite flying on Guam. The hope is to raise the level of participation each year to eventually host an international competition. And last but not least, to provide another option for Guam’s tourism industry as Guam is traditionally a kite-flying nation.

While on the plane, I was contemplating about what have I got myself into. It was not just the 15 hours of flying as I have experienced many much longer flights than this, but having to be at Airports 3 or more hours ahead of flight time, the long hours of waiting between connecting flights, which in this case it was 28 hrs total from Vancouver to Guam just to perform at a 5 hour event. And to top it off, my first flight out of Vancouver to Seattle was cancelled.

I was lost as to what to do, so I went to Air Canada travel assistance and asked the young lady if it was possible to get me on another flight to be in time to catch my connecting flights as I am going to Guam. I explained that I am deaf and asked for her to communicate with me with a yes or no. She looked at me for a few seconds and replied, “with those Blue eyes anything is possible. Please sit down and I’ll see what I can come up with for you”, which she did and within an hour I was on my way to Honolulu Hawaii. But I was also thinking about my kites and baggage with this mix up — would they arrive in Guam when I did? Would there be any one there to meet me when I arrived at my destination?

But I had worried needlessly because as soon as I walked off the plane, members of the Make a Wish Foundation Team greeted me with open arms and two beautiful ladies gave me a hug and a kiss and placed shell garlands of leis around my neck, and said “Ray, Welcome to Guam”. The gentlemen took care of gathering up my baggage and kites, which by some miracle was on the same flight. This part alone made me feel that the long journey was well worth it. I was then taken to my hotel — the 5 star Outrigger, where I was given a double bedroom suite on the 21st floor over looking the beach and Ocean. 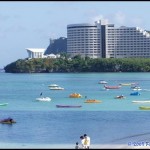 The room was beautifully furnished; on the beds there were plush bathrobes and slippers, coffee, and special Guam cookies. Each day a plate of different sliced fruits was waiting for me when I returned. The hotel also supplied a nice breakfast and an open bar in the Executive Lounge. This kind of hospitality was given to me each and every day of my 7 day stay in Guam — this was indeed a full sponsored invitation at its finest. I found the people of Guam so friendly warm and very sincere. Each day I was greeted with hugs and smiles, and complete friendship. I was asked so many times during my stay if I plan to return next year. My answer was, “You Betcha!!”

Guam is a very beautiful island! The greatest attractions are in the surrounding sea. Scuba diving is high on the list of things to do, as underwater visibility is excellent. Surfing, windsurfing, canoeing, and kayaking are also very popular. There are many hiking trails, especially at Tarzan Falls in central Guam. Venturing off the beaten track is called “boonie stomping” in Guam. There is plenty to make anyone’s vacation on Guam perfect, and now they have kite flying.

One of the highlights of my stay in Guam was visiting with Guam’s Hearing Impaired Students. I talked to the students with the aid of the sign language teachers and once they knew that I was also deaf we were just like one big family, and reaching out to these children was pure joy. Their faces were lit up with excitement, and then I did multiple kite flying demonstrations, but just like me they could not hear the music but were thrilled to the core when I refueled the 3 kites then broke away in my Crucifix formation. I am sure I made their day and they certainly made mine. 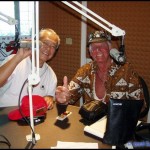 I was very impressed with how everything came together, especially seeing that this was their first kite festival. I take my hat off to all the members of the Make a Wish Team and also to all the wonderful volunteers. Everyone took great care of all the International kite flyers. Each day we were picked up from our hotel at 11 am. First on the day’s agenda was lunch and what lunches they were! You name it and you could have it, and each day lunch and dinners were at different restaurants with food fit for a king. Man, those Guam natives sure like their food. After lunch, I did a series of radio interviews with Mr. Modegi from Japan. Then we were taken to the park for pictures and interviews for media coverage and for some practice time.

After all the months of planning, the day of the festival finally came. Everyone was a little on edge as no one had a clue of how many spectators would show up for this very first kite festival, but again there were really no worries – school children began to arrive en-mass, spectators came from miles around, and soon the parking lots were full and the roadways jammed with traffic. 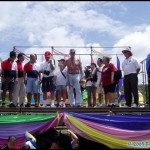 Kite flyers, Sponsors and dignitaries were featured on the center stage podium, the Wish Choir sang When you Wish Upon a Star, then they sang “Let’s Go Fly a Kite” as the Commemorative Kite was launched by the Philippines Team and local enthusiasts. Then David Gomberg introduced yours truly. Then I flew my Multiple kite “Romancing The Wind” kite ballet. This very special and unique Kite festival was officially open and from start to finish was, as I said earlier in this article, a huge success. And I was very proud indeed to have been apart of it.

I had to leave the farewell dinner a little early as I had to be up at 3am to be at the airport to catch my 6:00 am flight to Japan, “Would I be able to wake myself up in time?” Again no worries. Right on the button at 3:00 am Lou Lucena, a member of the Make a Wish board, gently tapped me on the shoulder then took my baggage down to the lobby while I got dressed.

When I arrived in the lobby Lorraine Okada the president of the Make A Wish Foundation and other members of the board were there to thank me personally for coming to there festival. I was then driven to the airport and completely looked after right up to the departure gate by a member of the board with a hardy hand shake and a, “Thank you. see you next year!” And as I have already mentioned, this was indeed a full sponsored invitation at its finest.

I would like to take this opportunity to thank the Make A Wish Foundation for inviting me to take part in your first kite festival, and also for your friendship and unrivaled hospitality. I traveled home with a great feeling that I had made many new friends, and would also like to thank you for your invitation to return in February 2006.