As one of three annual kite events put on by Sandy Pfaff and Ron Sears of the Visitor and Convention Bureau, this festival always features some of the premier indoor fliers in the world and excellent crowds.

With the World Sport Kite Championships coming to Lincoln City in late June, even greater steps have been taken to recruit sponsors and streamline the festival process, prompting Kitelife to get in on the action.

Having missed last year’s due to another festival, I had heard many great things about the event and it’s performers… With nothing else on my schedule for those dates this year, I knew I had to make the trip.

A few months earlier, I had arranged to meet with my good friend Lam Hoac at the airport in my home town of Portland so we could drive down together… So, after picking up Lam on Wednesday night we met up and went out for dinner with Scott and Theresa from The Kite Shoppe, Moon Kushner and Dave Shattuck (my assistant editor). Sating our appetites, we all headed our various ways to get some much needed rest before driving down on Thursday morning.

Arriving in Lincoln City around 10am, we checked into the Sea Horse Motel and made our way over to Taft High School where they would be holding the event… After warm greetings from both Ron Sears and Sandy Pfaff (from the Visitors and Convention Bureau aka VCB), I went about exploring the venue.

The actual performance area was one of the largest basketball courts I’ve had the pleasure of flying in, providing enough room for several fliers to be active at the same time… Behind the performance area was another court of the same size, strictly dedicated for pilots to work with their gear and for warm up flights.

Aside from the two main flying areas, the entry hall led into a commons area where several vendors had set up shop selling shirts and sweats for the upcoming WSKC in June, as well as The Kite Shoppe’s booth where they had a wide range of kites available for both fliers and spectators.

Next to the vendor area was yet another large room suitable for flying… Not one, not two, but THREE large outstanding rooms in which to fly? Kudos and hats off to the VCB for securing such an outstanding venue for this event!

The VCB also brought in Lee and Debbie Park (Aerial Experience) to put on their own unique brand of shows, complete with a smoke machine, colored lights and beautiful backdrop for the performance area… The ambiance was complete, now we just needed fliers. 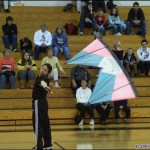 Among the invited pilots were the Parks, Lam Hoac, Penny Lingenfelter, Wayne Turner, Scott Davis, Jerry Cannon, Bill Rogers, Paul DeBakker and myself… Other attendees were Alan Cunningham, Kyle Wright, Bob Wendt (announcer), Jeremy Colbert (indoor lessons), Deb Cooley and Ronda Brewer (kite making), as well as quite a few others from up and down the Northwest coast.

Once most of the fliers had arrived, the Parks set about getting us all trained on an opening number which we would be flying each day… Starting with eight fliers shuffling in alternating fashion around the “stage”, we then went into choreographed mini-routines from each flier, eventually leading up to a grand finale with pairs of fliers cycling up the middle while flying their kites.  Quite an experience to particpate in, and it really lent to the whole presentation and professionalism of the show.

After running through the opening set several times, we found ourselves pretty much ready and wound down for the day… Time to get cleaned up and find some grubs!

About a dozen of us gathered at Pier 101 for appetizers, dinner and cocktails… Truly great camaraderie, and the food wasn’t bad either.  After dinner we headed back to our room to wait for my assistant editor Dave, who showed up around 11pm.

Waking up at the crack of dawn on Thursday, Lam and I grabbed some coffee at the local Starbucks and made our way down the 130 steps to the beach… Lucky us, a passing young man of 5 or 6 years old made sure to tell us how many there were as we passed him on his way up.

I had gotten a glimpse of Lam’s new Sea Devil at Kite Party in February, but had not gotten to spend any time on it since adding slack line tricks to my repertoire. He had brought the first one off the line for me to add to my bag, Sea Devil #1 (not proud, am I?).

After enjoying a great flying session with Lam in light to moderate winds and getting some promotional footage for his demo videos, we packed up and went about getting ready for the day’s show back at Taft High School.

Thanks much in part to the Parks’ influence I think, everything was set up as a show with scheduled times in the late morning and mid afternoon every day. Each set started off with the opening number, followed by tightly run demonstrations from most of the fliers present… Both shows kept the audience entertained by nearly non-stop performances for what seemed like an hour and a half each time around, with ongoing free flying before, between and after!

All the fliers had an opportunity to fly at least 3-4 demonstrations each throughout the day, entertaining a surprisingly large crowd for only being a Thursday.  Our residing AKA president, David Gomberg (who lives in the area) also made an appearance to enjoy the show.

When we were all done at the high school we headed to a beach access somewhat south of D River for some outdoor fun… Whipping our Sea Devils around in 8-10 mph with beautiful cliffs and the ocean as our backdrop. Then afterwards we met up with everyone else at the Chinook Winds Casino for a solid buffet and some great conversations.

Waking up early again on Friday morning, Lam and I headed to D River (the main beach access in town) to get some more air time… Scott Davis, Wayne Turner and Jerry Cannon also arrived around the same time to utilize the choppy and variable inland breeze of 3-6 mph.

Leaving for the indoor at 12:30 pm, we followed a similar schedule with the addition of a indoor Hot Tricks event. After three elimination rounds, we finished out with Wayne Turner in 1st, myself in 2nd and Lam Hoac in 3rd. Gotta share… Not being much of an indoor flier, I knew I had to do something different and flew with the strings looped around my ears, accompanied by chuckles and laughter from both spectators and judges.

One highlight performance in my mind was with Lam, Lee and Deb used a variety of costumes, both quad line and single line kites, as well as “Arial Tissu” where Deb performed a very graceful and breathtaking routine climbing a pair of large silk-like streamers attached to the rafters. 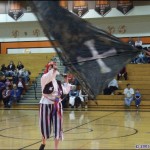 Another personal favorite over the weekend was Penny Lingenfelter’s new pirate routine (complete with bubble sword), Paul DeBakker flying to “Shhhh” by Bjork, and of course Lam’s presentations with his Revolution and vented indoor kite (VIP).

Late arrivals during the day was Alan Cunningham, Kyle, Rick and Kelly Wright, as well as head judge for the next day’s ballet competition, Bill Rogers.

That night over 30 people gathered at Deb Cooley and Ken Tumminia’s house to socialize and enjoy a “Lam Can Cook” affair… For those who have not experienced it, Lam Hoac is one heck of a cook! In just about 45 minutes, he whipped up several traditional Vietnamese courses that more than fed everyone present, and there were even leftovers!

One word of advice – whenever you get in on one of Lam’s dinners, keep any eye on those hot peppers! They can get you good if you’re not expecting it… Trust me, I know from personal experience. 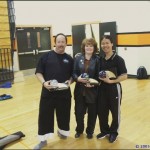 Highlights from Saturday were Lam Hoac and Lauren Davis’ impromptu pairs demonstration, Paul DeBakker’s trick demos done in an educational format for the audience (led by Bob Wendt on the PA) and Deb Park climbing the rafters (literally) to bring down some of their props when the lift they had used before became unavailable. Consumate professionals both, Deb was hoisted up with climbing rope and harness, counter balanced by her husband Lee and a couple of other fliers.  Wow!

Open Indoor Unlimited competitions were held at the end of the day, with outstanding performances from all who entered… Our hats go off to Todd Rudolph, who jumped right into the mix for his very first competition!  Lam flew a 1st place routine with his usual excellence, followed by Penny in a close 2nd and Scott Davis in 3rd.  Paul DeBakker also flew an exceptional routine but was disqualified when one of his wingtips went over the line.

The only real issue that came up on this last day was when the generator for the colored lights would sputter out every now and then, requiring someone to jog out the back door and get it started again… Ackowledging that this event went extremely well regardless, and having met Ron and Sandy, I have no doubt things will be even better next year. 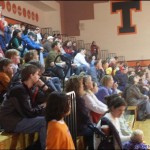 This being the first Lincoln City indoor event I’ve had the pleasure of attending, I cannot stress enough how impressed I was with how everything went… Bleachers were well-packed with spectators all weekend, happily entertained by the show.

Our thanks to everyone at the Lincoln City VCB, and to the Sea Horse Motel where we had the pleasure of staying… Dawn (the manager) and her staff made our stay absolutely painless, and they even recovered a bunch of my compact flash memory cards that got dropped in the parking lot.  Without a doubt, this has become our favorite place to stay whenever we’re in the area.

Until next year, when I hope to see you all right back here in Lincoln City!