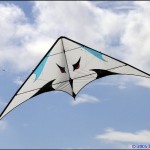 Quality of Construction
Where to start?  Lam has established himself as one of the top kite builders in the country, further compounded with his recognition as the 2003 AKA Grand Champion in Dayton Ohio… Also marking the first time a sport kite ever acheived such an award in comprehensive grand national competition.

The Sea Devil is clearly built with durability in mind, and everything is streamlined to avoid line snags during trick combinations and ground recovery.

The deepest part of the sail where the 4 wiskers attach is reinforced with 5 layers of material including a mylar/ripstop laminate which holds up incredibly well after hours and hours of friction from slack line tricks.

On the deluxe model, all four leading edge fittings are covered by the one-piece leading edge material, easily accessible through the cut outs for any possible replacement needs you might have in the future.

The nose construction is really amazing… Lam offers what he refers to as a “competition nose” on his Deluxe Sea Devils. Quite simply, he sews down the nose before sewing down the leading edge, enabling him to completely smooth over the nose piece which almost 100% elimates any line snags during backspins, roll ups, and other pitch tricks.

Where as we have only tested the Deluxe model, the Basic model runs a little lower in price, has a standard nose piece (not tucked under, but still trimmed nicely), leading edge fittings are uncovered, and does not include the extra color applique (accent) around each sail panel.

Both basic and standard models include excellent yo-yo stoppers, which are configured in such a way that they stay in place even with heavy ground work and roll overs.

Carefully monitored by Lam, sails are now being made by a longstanding and reputable sail maker in San Diego… This has enabled Lam to lower prices on his kites by roughly 20%, making them more widely obtainable while still maintaining the quality he is so well known for.

Bridle
The Sea Devil’s bridle is cored dacron, which we found to be extremely more durable than standard braided dacron… As with any kite when you do a large number of rotating pitch tricks (backspin, jacob’s ladder, etc), the bridle tends to take a significant amount of wear and tear over time.  With five months on ours and over one hundred of hours in flight, the bridle wore through twice but was saved on each occasion by the bridle’s core… Not a total break either time, allowing me the chance to fix it before my next day of flying.

Bridle wear is inevitable, but it’s reassuring to know the core will generally hold out long enough for a competitor to replace it if necessary… At the end of a competition day, instead of during.

We found no adjustments on the bridle configuration, but found on the same note that no adjustments were needed.  Testing in a wide variety of conditions from 0-15 mph, we found that there was nothing lacking or in need of adjustment for this pilot’s style… Flying a 3PT frame with 5PT bottom spreaders, the only change we made was switching to 200# lines in the higher winds for easier trick ability.

As with many trick kites today, the Sea Devil bridle has leaders that extend the cored dacron a couple of feet away from the kite, cutting down on line wear when doing roll ups and other tricks that place friction on your bridle or lines.

Design Features and Tuning
In addition to the Light model we tested, the Sea Devil is also available in UL (2PT) and Standard (5PT) models with the buyer’s option of heavier bottom spreaders.

With a prototype already made, Lam hopes to have a vented model available for the 2006 season.

Lam has done away with any bungi in the wingtip attachments, instead using cored dacron looped around itself… A little unusual at first, breaking down and reassembling the leading edge became very easy after the first couple times.

On the spine attachment, a similar system is used with the addition of a bungi line on the back of the spine to absorb kinetic impacts.

With a total of 4 wiskers and 8 holes, a flier can move them in or out to significantly influence the flight characteristics… While we did brief testing with them positioned on the center holes, we found our favorite setting was with them spread apart (as it is set up from the factory).

Wind Range
Based on our extended test period, we would assess the ideal wind range for the Light model to be in the 3-15 mph range… This takes into account precision, trick ability and frame distortion.  While this may be the ideal range, we also managed the kite quite well in even lower wind conditions… It would likely withstand in higher than 15 mph, but trick ability would clearly be sacrificed.

The UL (2PT) model is advertised for 0-6 mph, and the Standard (5PT) in the 5-25 mph range, although we have not yet had the opportunity to test those models.

Amount of Pull and Sensitivity
Pull is suprisingly light, but gives enough positive pressure to “set” your weight with it… Even in the 10-15 mph range, it was quite manageable and did not hinder trick ability to any great extent.

Unlike Lam’s previous kite, the Sky Master, his Sea Devil is very stable with little to no oversteer, making it a superior precision kite as well. The only area we found any amount of twitchiness was during side slides or hovers, where the kite is most sensitive… With a little practice though, we found side slides to also be within reach.

Strongest Tricks
The Sea Devil is pre-weighted for the best balance between trick styles, and is by far the easiest kite we’ve attempted the jacob’s ladder on… In a turtle or fade, one step in and a pull on the line sends it into a smooth and controllable rotation, giving clarity to the transition between flic flacs, jacob’s ladders, etc.

Yo-yo’s are easily within reach from a fade, sideways from a jacob’s ladder, or straight up… We really enjoyed playing with combos like backspin into flic flac, into backspin the other way, into a roll up.  Bottom line, the transition between tricks is so articulate it gives the flier time to think and really lay down long controlled trick sequences.

We also found trick launches such as the superstart or flapjack to be a breeze, even to a landing or tip stand… Rising fades, cascades and backspins, no problem.

If we had to pick this kite’s strongest tricks, they would likely be the jacob’s ladder, backspin and the flic flac… Not requiring as deep an in/out motion as other kites, the Sea Devil puts almost everything within easy reach.

Precision
The Sea Devil is a step in a new direction for Lam, with little to none of the oversteer which many of his past designs have had… Precision and trick ability are well balanced, while sacrificing very little of either.

Similarities and Differences to Other Kites
Lam’s other most recent designs, the Master Control and Sky Master both offer a good amount of oversteer making backspins and spin landings blazing fast… Precision is possible with a delicate hand, but requires a a very accurate and skilled touch.

The Sea Devil didn’t get away from us at any point, was very consistant in flight and handled turbulent winds with ease.

Flying Experience
Thank you sir, may I have another?!  Having spent over a hundred hours on the Light model so far, I’m really looking forward to getting time on the the other models for both ultralight and heavy conditions.

Fun, fun, fun… My other kites have barely seen the light of day since I got a hold of the Sea Devil.

Summary
We’re really fortunate to have Lam making such an excellent design available at industry standard prices, no longer putting them out of reach with $500+ price tags…  The Sea Devil MSRP is in the $269 to $329 range, making it very competitive with any of the popular French kites at the same perfomance level.

Lam provides personal support with all of his kites, answering any questions by phone or email and happily shares his experience with anyone who needs it.

This kite is suitable for a wide range of flyers from intermediate to advanced, and is available for order through your local kite shop… This is one addition to your kite bag that you will not regret!