In my last two discussions about team maneuvers I talked about the possibilities of altering other teams existing moves to fit your teams style and add to the uniqueness of your team routine.

Another idea which is frequently used by very new teams is to include the team compulsories as part of your routine. These maneuvers are already drawn out and you have to practice them as compulsories for Precision anyway, so they’re a good choice! (But, unfortunately, not terribly original.)

During the time I flew with Pair of Pairs (Rick and Rob Gardner and Vicki Romanoff) we frequently refereed to the Pairs precision Compulsories! We were, after all composed of two pairs teams (Sideshow and Rob-n-Air).

Some of these pairs maneuvers fit well with our team when done side by side often in opposite directions! But we always would enter/exit from any of the maneuvers in some kind of follow arrangement. Sometimes in pairs sometimes as four, but always with at least two kites following each other!

1999 was the year of Captain Eddie’s Flying Circus Reunion Tour. Vern Balodis, Mike Gillard, Vicki Romanoff and I hadn’t flown together for 4-5 years. But we had all been flying team (sometimes against each other) gaining experience and learning new skills, and attitudes!

From the very beginning of our discussions as a team we decided that we weren’t going to be like any other team. NO FOLLOWS! EVER! We came up with a pretty simple idea that kept us out of the Follow Syndrome A flying method we called the Zone system!

In the Zone system each flier has an assigned area of the sky they would start from or return to before or after each maneuver! (i.e. #1 flier went to bottom, right side of the window, #2 flier went to Top Right, #3 flier to Bottom Left and #4 flier to Top Left) This frees the team from the Follow Syndrome when entering a maneuver!

So when CEFC did the Zone version of a figure eight follow, we all rotated from Home to Plus One, Plus One to Home, Home to Minus One, Minus One to Home. The team NEVER enters the center of the window and NEVER follows in the obvious manner! If this all seems somewhat confusing, take heart. If you’re flying on a team right now you’re using some of this idea every-time you practice some of the current AKA Team Compulsories! Specifically two recent additions to the Compulsories list!

Take a look at Team Precision Compulsory DT 01 – Team Rectangle and you’ll see that the compulsory is very similar to the Circus “Home to Corners” maneuver, and if you look at Team Compulsory DT 09 – Spiderweb you’ll see kites entering from what the Circus would have called Zone Minus Two This isn’t really a coincidence, as one of the fliers that helped to design the Zone system, Mike Gillard was and still is an active member as well as a past and now current chairman of the AKA’s Sport Kite Rules Committee.

The Zone system allowed the Circus to enter and exit older existing maneuvers in a new way. For example, the previously discussed maneuver QuadraDazzle was adopted by the Circus to have the team enter from Zone Minus One. This did away with the initial Four Flier Follow that begins that maneuver. Our exit from QuadraDazzle was to another Zone in readiness for the next maneuver!

BUT it also allowed me to re-examine my earlier idea about using some of the AKA’s Pairs Precision Compulsories as a ‘spring board’ for new maneuvers. My first step in the thought process began with making two copies of each of the Pairs Comps on clear sheets of plastic. I’d then move the clear plastic ‘maneuvers around and look at the combinations I could make with four fliers, using the same pairs maneuver!

I became very interested in the Pairs Compulsory DP 07 – called H The main attraction was that the pairs fliers entered the maneuver from different directions. This fit our Zone System idea very well. The Circus called their variation of this pairs precision maneuver ‘MIRROR H’ .

I will dispense with the basic description I have previously used to describe maneuvers. This maneuver appears ‘on paper’ to be pretty simple, and in flight it is, but ONLY IF all the fliers ‘See the picture’. Meaning all the team fliers have to have the concept firmly in mind when they fly ‘Mirror H’. 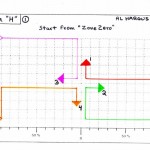 If you look at the last two diagrams you will see that although the ‘pairs maneuver” H has been altered to fit four fliers, pairs of fliers still must match each other for the maneuver to be successful! In the case of ‘Mirror H’ fliers #2&3 are partners and #1&4 are partners. Although all four fliers will have to execute ALL turns simultaneously, the pairs must fly exact as they are in close proximity to each other and any ‘miscue’ between them will be more noticeable!

To coordinate all the turns of this maneuver we used a simple number system to tell the team when to turn and exactly what location they should be in with relation to the rest of the team! The ‘Caller” would say ‘One’ which would be called at Zone Zero or Home (starting point) ‘Two’ at the turn toward the center of the window, ‘Three’, at the flank turn at the center of the window, ‘Four’ at the first 180 degree turn, and so on. There were a total of eight ‘Number Calls’ with ‘One’ at Zone Zero (or home & start point) and ‘Eight’ at Zone Plus One (or finish point) Of course, you could use almost any call or team signal to identify when the team should make each turn, but EXACT timing is VERY critical to the success of this maneuver!

When the Circus finally perfected this maneuver we realized that the ‘Picture’ we were drawing in the air was truly unique. When executed properly ‘Mirror H’ shows four fliers rotating around each other in an ever changing circle of different sizes. BUT one thing the Circus realized as well was that we could and often did ‘hypnotize’ ourselves into problems by watching the rest of the team as a whole! Each individual flier MUST watch and fly their own position in time with the calls or disaster can result!

The 1999 Sport Kite season that we flew the Captain Eddie’s Reunion Tour was my most enjoyable team season ever. Mike, Vern, Vicki and I had accumulated nearly 40 years of team experience both together and with other teams. We had already crashed and DQed, made mistakes, but also attended world championships and and did our share of accepting trophies for good flying and learned an awfully lot about team flying and ourselves. That massive amount of experience both good and bad showed when we walked out onto the competition fields in 1999.

We flew well that season, and had a good time while we were at it. You cannot ask for anything better in Team Flying!

I would like to thank Mike Gillard, Vern Balodis and Vicki Romanoff of Captain Eddie’s Flying Circus, because without their combined efforts and perseverance ‘Mirror H’ would have been nothing but a cute set of colored lines on paper!