Three years ago, I took Susie on a quick holiday to Istanbul. It was a city I’d dreamed of seeing and I couldn’t imagine a kite event there so simply decided to go. 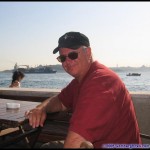 Guess that goes to show you. Kites are everywhere, and there is no place there aren’t enthused people promoting them. So when the invitation came to visit Istanbul again, I jumped at the chance. Besides, there is a big difference between being a tourist and being a visiting kiter.

The ink was hardly dry on World Sport Kite Championship scores and I was headed to the airport. 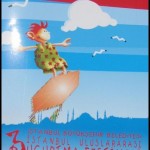 Mehmet Akoz and the Istanbul Kite Flyers Association had something specific in mind. They wanted to network. They wanted to meet ‘movers and shakers’ from other kite organizations and learn what they could about festival organization, competition rules, kite marketing, and travel. They also wanted to promote their own events and activities in the city.

To accomplish those goals, they invited fliers from STACK, the Japan Kite Association, Indonesia, India, and me.

My flight from Portland connected through Munich and then landed in Turkey around midnight. I cleared customs with three big gear bags and was immediately greeted by Ms. Gulen Okumus waving a kite and calling out “Mr. Gomberg! Mr. Gomberg!”. Old friends Masaaki and Sachiko Modegi of Japan were right behind her.

It is always a relief to find connections easily after a long flight to an unfamiliar destination. We were quickly organized and whisked off into the Istanbul night. Ninety minutes later, I was in my comfortable hotel, had phoned Susan, checked email, and was in bed.

Dawn comes early to the shores of the Bosphorus, and so does the call to the faithful. Within a quarter mile of my hotel were the minarets of nine mosques. And at 4:30 a.m., a mere three hours after I’d hit my pillow, I woke to the sound of Imman reciting prayer over loudspeakers. At first the melodic chanting seemed romantic. But as the sounds grew nearer and louder, I began to worry that a cleric might actually stick his head in my open window. They seemed that close!! “Good Morning Mr. Gomberg! Welcome to Istanbul!! Time to wake up and pray!!”

I got up, took a long shower, spent an hour on mail, and then headed for breakfast. That left time for a short walk to the water’s edge. I was in Istanbul again, standing on the top of Asia and peering across a busy strip of water to Europe and the old city. My adventure was about to begin!

Our first briefing was at the IKFA headquarters. After meeting the staff and noting details for the day’s schedule, we headed out the door to go downstairs and board our bus. 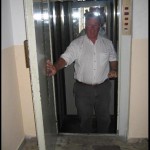 The elevator was about three by three feet. I got in, the Japanese got in, the Indonesians got in, and then the Indian crowded in too. We squeezed together and giggled as the elevator slowly descended. But when it reached ground level, there was a grinding noise and the car slid another two feet. Suddenly our cozy ride felt alarmingly claustrophobic!

We shouted for help, and after an agonizing wait, heard Turkish voices on the other side. An excited crowd gathered, and eventually began to assault the door with pocket knives, screw drivers and a hammer. Nothing worked, and after fifteen minutes, I began to fear the headlines — “Gomberg Lost in an Istanbul Elevator”. Images of Susan and home passed before my eyes. Then suddenly, the door popped open. Someone had found a key.

Istanbul really is a remarkable city. Founded by the Roman Emperor Constantine, Constantinople anchored the Eastern Empire for a thousand years after Rome itself fell to the barbarians. Art, culture, and architecture flourished. The Crusaders came in 1100, and although the city was Christian, it was the wrong kind of Christian (and probably looked too wealthy) so the Crusaders sacked it. Constantinople never recovered and in 1450, the Turks took the city, converted the huge cathedrals into mosques, and established the Ottoman Empire. Following World War 1, the Empire dissolved and a modern republic was formed. Now we were here to fly kites.

Rescued from the elevator incident, we visited the festival field. A grassy park at the edge of the sea would provide a good venue as long as the wind came off the water and not over the neighboring apartments. We opened a few kites for the press and spent the afternoon flying leisurely.

The following morning, we met the media again for a press conference and flying exposition in the city.

Will someone please explain why I keep ending up in some of the coolest places in the world to fly, and find the most challenging conditions to try and do it. The Super Bowl was like that with a ten foot wide dock next to the Stadium. Now I was standing on a sidewalk with a busy street on one side, and a seawall on the other. Winds were gusting and people were walking through, and the news cameras wanted to see something…

Day three was workshop day. At a municipal theater, we set up kites and kitemaking exhibits, and then spoke not to the public, but to Association cameras on the history and techniques of kiting in our various nations.

We visited the IKFA production facilities where 2000 traditional Turkish hexagon kites were being made for distribution at the festival. And we took plenty of time for large, festive meals, formal meetings, and official presentations.

On festival morning, those 2,000 kites went quickly. Winds were strong and bumpy, and of course, the traditional kites flew best. After all, isn’t that why they became traditional?? Families covered the hills surrounding the flying fields and like every event I have seen around the world, there was drama, trauma, and plenty of smiles to go around.

At one point, an assortment of Turkish Superheros appeared to help me fly the big stuff. It always helps to have a superhero when you don’t have an anchor. And whenever the wind dropped, Superman would turn his back to the kites, make ‘flatulent noises’, and waive his cape to generate the needed wind.

An attractive television reporter chose the Meanie as a backdrop for her story, only to have the wind shift and drop the bridles all over her and the camera. (Click for both views.)

It was a good flying day. Homemade hexagons mixed with newer designs on the field as local fliers brought out their best. The mayor of Istanbul wandered among us, giving the larger kites a tug. Boundaries designed to insulate the formal fields disintegrated and kids ran around the larger showpieces. It didn’t seem to bother me. And then all too quickly, it was over.

The one constant throughout our hectic week was the exuberant, indefatiguiable Mr. Mehmet — laughing, shouting, and waving his arms. He’d met me at the airport at midnight and been back to greet the Indonesians when they landed at 6. He’d worked the politicians, chaired the meetings, and met the press. And then he’d wade in and pull a kite out of the water.

When it was too windy and dangerous for us to launch anything downtown, Mehmet had popped a large maneuverable foil up off the sidewalk, wheeled it back and fourth over the water, and then looking for a place to land, he hopped over the traffic divider, skipped across the street, and brought the foil down with a thud in the parking lot on the other side.

Sadly, Mehmet spoke little English and we spoke less Turkish. But his smile was infectious. And our constant interpreter and assistant, Ms. Gulen, was always available to answer questions and help. 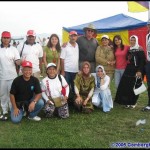 We packed gear on the field and prepared for one last evening in the city.

From the Asian side, we crossed to the European side. Our hosts had arranged another banquet in a thousand year-old converted mosque. Music drifted through the courtyard and dancers performed between the tables.

I’d made many new friends during my five days in Turkey. We had helped, I think, to spread the multi-cultural joys of kiting. We’d taken part in a successful and well attended event. We’d eaten way too much, and I hadn’t died in the elevator. 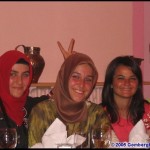 When it was time to say good bye, there were tears. “The girls would like to hug you” said Gulen. “Is it allowed?” I asked.

Gosh, if I’d only known sooner…

My flight left at 6 in the morning. That meant a hotel departure at 3:30.

Right on cue, Mehmet arrived, stuffed my bags into the back seat, and drove me off into the Istanbul night. The forty-five minute trip to the airport took thirty. We embraced at the curbside, and said our farewells — me in English and he in Turk. Then he sped off, one hand waving wildly out the window and the other madly honking his horn…