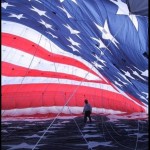 Walking inside the Mega Flag is an absolutely remarkable feeling.

The light filters down in waves of red, white, and blue. The fabric rustles as the air begins to fill the enourmous chamber. And as the long through-cords begin to lift the floor slightly off the ground, you begin to feel like you are actually a part of the largest kite in the world.

We had come to Dallas for the inaugural flight of our newest acquisition. Fittingly, it was Flag Day. It was also my birthday. And now I also notice that this is our 300th Weekly Update.

Weeks ago, we had dispatched Jim Martin to New Zealand for a week of Mega Kite training. We had then shipped the new kite to America at a cost of over $2000. We purchased a new trailer to transport it to shows. And then we brought it to Texas for a first time festival organized to support LifeNet and their worthy array of social service programs.

Flying this behemoth is no simple matter. A big kite needs a big field and a big crew too. We had a fully loaded transport truck as an anchor and fifteen wonderful volunteers anxious to be a part of this historic flight.

We began the morning with a briefing on safety and flying procedures. Our priority — to put on a good show. The only higher priorities were to not hurt anyone and not damage the kite. We explained that staff was there to lift the kite up, not hold it down. People simply can’t hold it down! So if your feet start to leave the ground — let go! And always, always, always watch out for lines. 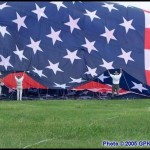 Only volunteers who had attended the safety briefing would be allowed to help.

The initial task was to spread the kite out and attach the bridle lines. Then we anchored the side stabilizing lines designed to hold the sail in the center of the wind. With everything in place and double checked, the team lifted the leading edge and let the kite slowly begin to fill with air. And trust me, it takes a lot of air….

Generally we have said that the Mega Flag could hold 20 full size school busses. But that may not be accurate. I recently received this note from a dedicated big kite flier:

I checked the US Dept. of Transportation site — the maximum school bus size is listed as 40 by 8.5 feet, according to regulations adopted in 1995. If you inflated the kite and started parking buses in it, as tight as possible, you could get two parked nose to nose, aligned with the wind, to pretty much fill the 83 foot dimension of the kite. You could do that side by side 15 times across the 130 foot dimension, for a total of 30 (!) school buses, wedged in like sardines. You would probably knock off some of the mirrors getting them in there… Also, there’s is some slight danger of damage to the kite… so I’d suggest leaving this as a gedanken experiment at least for the present…

By the way, DOT does not list information on the permitted height of school buses, but my hunch is you could park those thirty, build a platform on top of them and park another thirty on top if you really wanted to.

Funny the things you think about as the Mega Flag begins to take shape.

The Flag is a remarkable piece of engineering. Because of the large size, everything happens slowly. The giant form begins to take shape and then when the chamber is filled with air, the top sail begins to lift the front sail off the ground. Volunteers stand clear as the wind now moves below the face of the kite and begins to generate lift. For a moment, the kite hovers just off the ground. And then it rises gently to a flying apex, suspended between two stabilizing lines and anchored with a 20 ton spectra rope.

It is hard to know which is louder — the cheering of the crowd or the pounding of your heart.

Staffing the kite is a great experience as well. Out of respect, we don’t let people generally walk on or inside the Flag. But staff get to be very, very close and that is just as amazing. You get to lift the sail, see the engineering details up close, and experience the interior atmosphere. And as the kite lifts off, you also get to handle side lines and sense the power of this 10,000 square foot wonder. 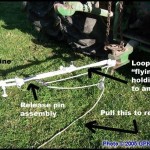 So once you get a monster kite into the air, how do you get it down??

Popping a line that is under several tons of pressure might be more difficult if our gear did not include a patented stainless steel quick-release pin.

As I have said before, the Mega Flag is a product of brilliant engineering. A series of emergency and retrieval lines are attached to the trailing edge. So to collapse the kite, you simply release the sideline and then ‘pop’ the main flying lines. That flips the kite on its back so the air can easily spill out.

Watching the kite turn over and fall back toward the ground is a spine-tingling sensation. Amazingly, it lands cleanly laid out with lines smooth and untangled. That makes re-positioning and launching again fairly simple. You just have to drag the 500 pounds of fabric back into place!

Launching and landing are so spectacular that we plan our shows to include at least three rotations. With a kite this size, watching it go up and down is more interesting to the public than watching it sit in the air. 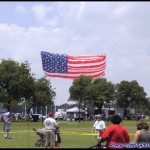 I also really enjoyed watching Susan woman-handle the kite. With a piece this big, finesses is more important than strength. She is an excellent big-kite wrangler with good instincts and plenty of experience.

We actually managed four flights for LifeNet over the course of the day.

Winds ranged from light to fairly strong and gusty. Each flight was about fifteen minutes long. When the kite was on the ground, it drew plenty of attention. And when it was in the air, it dominated the sky!

This shot is taken from 300 yards away… 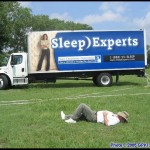 At the end of the day, I laid down for a moment in the shadow of our anchor truck. The first flight had been a great success and we were impressed with the manageability and impact of the Mega Flag.

Thank you to Jim Martin, captain of our Flight and Safety Crew, for directing the program for us. Thanks to all the volunteers who came out and did a great job moving and inflating fabric. It looked to me like you had fun. And a big thanks to Lifenet of Dallas for making this first flight on Flag Day possible.