With my longest competition day ahead of me, we wandered down part way towards the Kite Loft for an excellent breakfast buffet at a nearby Italian restaurant (the best I’d had all week)… On our way out I caught sight of Dodd Gross’ new kite (the French Connection) so I stopped to fly it for a bit, and had a great time in the 15 mph or so wind which was blowing from the north, on it’s way down the beach.

The way things worked out, I actually had a little more time to stroll around the beach… Giving myself about 30 minutes of browsing, I then headed on down the boardwalk with kites in hand, ready for my final events to get rolling.

On the way I saw a few cool things, as you can certainly see from the non-sport kite photos you see here.

Before sport kite competitions began, there was a rokkaku battle on one of the fields, which more than a few of our attending competitors participated in. Aftwards, the day kicked off with Masters Multiline Ballet… On a neighboring field, Masters Team Precision got underway.

One highlight was Scott Weider’s return to AKAGN competition after a 1-2 year hiatus! Without a doubt one of the top competitors when he’s in practice, Scott turned out a great routine with a couple of his patented flat axels despite being off the sport kite competition circuit for a while… Great to have you back Scotty, and I look forward to seeing more from you next year!

Another highlight for me was the Open Individual Freestyle event, which actually gave passing pedestrians on the boardwalk cause to stop and take it all in… The largest production of the day by far was Andrew Albosta’s routine, which involved 30 or so people coming on the field with paper Storm Trooper masks (Star Wars), and a “Sith” played by Andy Burchfield walking in front of them towards Andrew when the Imperial March began… During the course of the routine, they both picked up a light saber each and played out a duel, using a kite as the centerpiece in this Star Wars based performance.

For an event that nearly expired, I’m happy to report that it has gained back some of it’s popularity as an open style event… Called Outdoor Unlimited starting with the 2006 season, this discipline allows fliers to use elaborate (but safe) props, innovations and themes to bring their performances alive.

In addition to the events shown above, there were also a couple of others but scores were not posted when I left the beach and it was high time to start getting ready for the auction and banquet… At the convention center, attendees placed bids in the silent auction, eventually leading up to the loud auction which was led by David Gomberg.

While I don’t have a total figure for how much was brought in, I can tell you that the largest bid went towards a Ron Gibian custom Revolution 1.5 quad line kite at $950.

Also worthy of note, a Jose Sainz kite made in honor of sport kite pioneer and loved flier Sue Sedgwick who passed on recently… This item was modeled after some of her stained glass work and went for $650 or so.

As the banquet was heading into it’s later hours, my old friend Mike Gillard and I escaped back to his hotel for some reminiscing and refreshments… But, as I was headed back to my own hotel around midnight, I stumbled into a group of troublemakers. 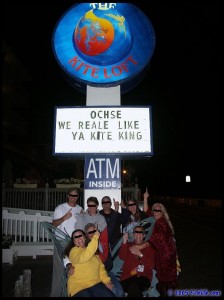 Following them up to the Kite Loft sign, they had changed the letters around within about 15 minutes, not only following the Ocean City AKAGN tradition started by Chicago Fire in 2002… In this instance, it also served as a message for Kite Loft owner Bill Osche who has been quite good to the AKA whenever they come into town.

Alright, enough said… It’s just about 5:15 am, I’ve just finished the next issue of Kitelife (#44) for release in the morning, and need to get some rest for my run at Hot Tricks tomorrow on the beach… I’ll be sure to post final results from all the sport kite competitions after they are announced at tomorrow night’s banquet, also marking the end of this year’s daily updates from the AKAGN.