We’ve been receiving cards and calls from friends around the world. “What happened??” they ask. “Are you and Susan ok??”

Yes were fine, thank you. We’re not in a Canadian jail, or lost in an airline crash, or kidnapped by anti-kite extremists. I simply couldn’t access the FTP server to upload an update last week. But I do apologize. I think this is the first weekly report that I’ve missed in over two years. 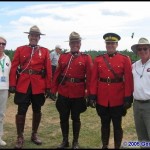 The scenic city of Dieppe in New Brunswick long ago partnered with the Dieppe of France that rests on the English Channel. Dieppe-France hosts an enormous kite event every two years, so it made sense for Dieppe-Canada to take alternate years and start to do the same.

The goal is to build the largest kite event, with the broadest international participation in North America. And they are well on their way to doing so.

So imagine the scene as our caravan of busses pulls up to a small community center on Tuesday morning. Out pops Michael Alvarez, Robert Trepannier, Ray Bethell, George Peters and Melanie Walker, Lee and Debbie Park, Lam Hoac, Pierre Fabre, and Peter Lynn. The Native American children who had come to dance for us are stupefied as a collection of the finest kites on the globe are lofted by some of the finest kiters.

The following day we performed at a small park next to the City Hall and then at the beach. We visited the Bay of Fundy to watch the grand changing of the tides and partied at sunset on the Gulf of St. Lawrence.

And then on Thursday, the formal festival began. Busses filled with kiters from KONE and the Connectikiters arrived from the States to augment the fine continent of Canadian fliers. An appreciative audience watched the show. And constantly humming around us was a swarm of hungry Canadian mosquitoes.

Ground displays and banners edged the newly groomed fields and giant show kites graced the ever-changing winds. Warm breezes bounced us from one side of the grass to the other. More than once, the kites collided and fell from the sky.

Each evening, live music brought more people to the field and filled the beer garden. We would breakfast at the hotel, travel to the site for lunch, eat dinner at five, and then enjoy a late-night snack. No one went hungry in Dieppe.

Friday Dieppe featured one of the very best indoor showcases I’ve ever seen. A planned flying program, supported by lights, music and affects entertained a thousand guests. Saturday, a fine night-fly filled the event fields. For me to compliment the effort is high praise since my dislike for night-flys is well known. 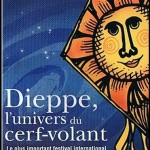 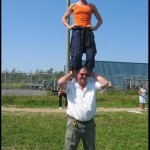 This was the Third Bi-Annual Dieppe International festival and a strong program is evolving. The site was large and has great potential. Community support is evident. And on our final evening together, the fliers ate an average of three local lobsters each.

Each day there were new kites, new delights, and new surprises — like carrying Debbie around the field.

Tuesday morning, Susie and I headed back to the airport and the long flights west. We arrived home late and began the effort to catch-up from a week away. We would have precious little time. I was due in Long Beach on Thursday for the Washington State International Kite Festival.