We had come to Korea to promote peace, harmony, and reunification. 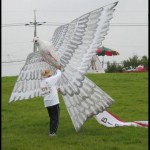 That’s a tall order for a country and a culture divided for over fifty years. Yet, as fliers from around the globe gathered on the field north of Seoul, we realized we were a mere mile away from the demilitarized zone. If we let out enough line, the North Koreans could actually see our kites.

The 38th Parallel bordering North Korea is one of the most dangerous political boundaries on earth. The boundary cuts through not only the land, but also the hearts of an otherwise united people. It is also a symbol for unresolved conflict across generations.

The month long Peace Festival featured music, art, drama, and for two days, a group of international kiters. We had fliers from England, France and Spain; China, Thailand, Singapore, the Philippines, and Indonesia; Japan, Australia; and from the USA, Susan and myself.

Think a group like that is easy to organize? One night we went out for Korean Barbeque. A collection of meat came to the table but we couldn’t tell what was what. The Thais didn’t eat beef, the Indonesians didn’t eat pork, and Susan (a struggling vegetarian) didn’t want any flesh at all!

When our winds finally arrived, a wonderful collection of kites rose into the sky. We had traditional made from traditional materials, traditional designs converted to modern inflatables, and non-traditional inflated animal kites.

Competitions were held for Artistic Air Creation, Highest Flight, and Stunt Kite Showmanship. Points were awarded for appearance, entertainment (both the kite and the flier), and reflection of the event’s theme.

Susie and I popped up a stack of Meanies, and then lofted a flock of Ghosts. We handed lines off to children who seemed remarkably proficient with the larger kites — and more than happy to help fly them!

Early on the second day, we were invited to visit the DMZ.

Like many of you, I had visions of this no-mans-land between the two Koreas and the military tensions that it reflected. A tourist tour?? That struck me as very odd.

Military police boarded the bus to check our passports. We strolled around look-out posts. We traveled down into the ground to see tunnels dug by the North to transport invading troops under the border. We took note of the many signs warning of land mines just off the road. And we peered North and imagined what life was like across the border. It was an eerie way to start a festival day. 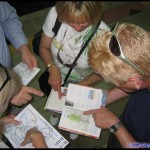 Sunday night, we enjoyed a fine farewell banquet complete with toasts, speeches, awards, and for most, sad farewells. The majority were leaving for home Monday. But a few of us planned to stay on and make our way into the city.

We would board the local subway, travel like locals, eat like locals, and hopefully even find our way home at the end of the day.

This was going to be a completely new adventure.

The subway was crowded and we stood the entire trip. But emerging into the daylight was a feast for our cultural appetites. We began with a stop at the magnificent royal palace and museum.

I had been disappointed with our late start, but as luck would have it, we arrived precisely at noon and in time to watch the changing of the ceremonial guard.

We watched the program, took pictures with the school kids, and toured the palace. On the way out, I noticed a sign that started with the words “Free!”. Guardsman were available to help us try on ceremonial uniforms. Free dress-up in Korea! I’m not sure the palace was really safer in our hands….

From the palace we traveled by bus to the open market. We lunched and bartered for souvenirs. 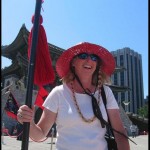 The day was filled with laughter and memories. Susan searching for acceptable food – locals admiring Kevin Sanders piercings – me searching for toilets – Linda Sanders pantomiming to street vendors that she wanted an ice cream – Derek Kuhn selecting the right watch from a tray of 400 (none of which seemed to work).

Everywhere we found the people friendly, open, and anxious to help strangers. 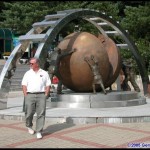 By the end of this last day, I had the satisfied sense that Susie had enjoyed a really good trip and the company of dear friends.

At the edge of the DMZ is a sculpture. It is a globe divided in half. Inside are relief maps of the North and South with corresponding cut-outs on the opposite side. The people of Korea are shown trying to push the two halves back together.

I often say that kiting helps bring diverse people together. We hade come to Korea to promote peace. We found a yearning in the country to reunite with family, friends, and fellow Koreans across the border. Perhaps in some very small way, we had helped pursue that goal.