It is with very heavy heart that I announce the passing of Betty Hirschmann from Ovarian Cancer on August 7. Scott E. Spencer was at her side through the entire illness, giving her the love, care and support she needed to make it through the many hard days. This was a selfless woman, a good listner and she had an undeniable spirit, you always knew where her heart was coming from.

Her interest in kiting started in 1991 when she bought her first kite, from there she went on the compete with both dual and single line kites, she also judged in both categories. Her interest then shifted to the business end of kiting where she held the post of secretary for the AKA from 1994 till forced by her illnedd to give up the post. Betty was also secretary for South Jersey Kite Flyers (the only one SJKF ever had). Additionally, she has served as Chair of the Elections Committee, the Elections Committee, the Membership Committee and while still serving in these capacities had taken on Chair of the Contracts Committee. These are some really big shoes that are going to be difficult to fill. Betty was the 2004 winner of the Bob Ingraham award, one of the highest honors bestowed by the AKA to one of its members.

If you needed a volunteer for anything, Betty was always one of the first to raise her hand and show her support. At her first convention in 1991, she volunteered to work at the registration desk in an effort to meet people in the kiting world. Since that date she had attended every convention until getting ill and had continued to lend a hand not only to the registration area, but had worked in auction receiving, entering data into the computer for the auction program, working the payment table at the auction, and attending all Board of Directors meetings and Annual Meetings in her capacity as AKA Secretary.

It was always fun to spend time together with Betty at a workshop, she’s get frustrated and rant and rave, just a little, but in the end her finished project always looked great.Betty will be greatly missed by the entire Kiting Community and she was one of my best friends in it.

At the Fort Mott Fly and Meeting on August 21, 2005, members present were all given the opportunity to write something on a Kite about Betty. Near the end of the day, Scott E Spencer flew the kite and released it to be free of the earth and everything that goes along with it. Of course, knowing Betty, the kite in it’s freedom got caught in the top of a tree and stayed with us till we were about to leave, then it disappeared.

We’ll all miss you Betty, Love Cel and Mike Dallmer 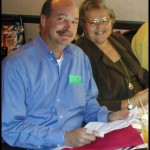 “We take life one day at a time. Try to enjoy as much of it as we can.”

“After another operation her blood pressure was so low a respirator was inserted. Many other previous issues became profound. A call from the doctor asking if extreme measures should be engaged to prolong her life for another 6 months or so was asked. The clan (family) amassed at the hospital. I consulted with the clan as a courtesy. We all knew Betty’s wishes and I had the formal documents. We agreed to disconnect and or remove any non-comforting apparatus. Three hours later she passed on to the other side holding a Charlie Sotich miniature kite in her hand.”

“I’m sure she is looking for the John Edwards section. She loved that show. Just to give me a pat on the butt. In the past we would joke about death and dying. I would say something off the wall and she would respond with “You’re sick, BUT I love It” or “God’s going to send you to hell” I would respond with either “I hope it’s a dry heat” or “Wherever your going you’ll be there long before me.””

“Betty loved Elvis. Hence the phrase “Betty has left the building”. August 7th 2005 at 12:55 AM. As per her wishes, her cremated remains will/have been sprinkled between her mother and father.”

“God has a purpose for all this s***-***k stuff. I am just a mere mortal and will never, as a mortal, be able to understand it. I can only grow, change and become stronger do to this experience. I pray you do the same too.”

“They say the day your diagnosed you’re a survivor. And we did survive the journey. Betty’s destination was not our choice. I have been keeping busy most days but still have those “Navy Blue Days” here and there. I have been working, finally. My boss is understanding, flexible and forgiving. De-cluttering of the house has begun. She loved to shop but never throw anything out. I have been finding happy homes for most things. I Can’t throw things away, either. Recycle! I pity the poor fool who has to go through all my stuff!”

“All this rambling has been painful, releasing of pent-up emotions and part of my therapy. It really does work to do what trained professionals tell you to do. I hope my sharing has brought some brightness into your life too. It sure has helped me.”

“I still have a desire to have a Celebration Of Life Party, in Betty’s honor… Just have to get through this transition phase, first.”