Kids. What can we do with them at our events? I’ve see all kids of things done with kids on my travels around the kite planet.

Here are a few examples pulled from my Weekly Update achieves. Look them over and vote for your favorite.

I’m in Barcelona for a festival back in ’01. Down the beach I see something going on that I need a closer look at.

Kids are lining up to go out on the field. They are being outfitted with plastic cover-ups, goggles, matching hard hats, and then each gets a butterfly net. What the heck is going on??

It is the annual EGG CATCHING contest. That’s right! Kites are used to lift eggs in the air and the kids are scrambling to catch them when dropped from fifty feet. Pandemonium!!!

Peter Lynn makes the biggest kites in the world. For a number of years, the MegaBite and then the MegaRay were the record holders. I brought the “Bite” over for its first USA performance in 1995.

During a show, Peter would stake the kites out on the ground, inflate them, and then let the public walk inside. Just make sure you have all your kids with you when you exit!!

Click here for a short video of the inside of the Ray.

GKPI now owns the largest kite. Actually there are two right now of identical size. Ours is a giant American flag. But we won’t be letting the public come inside the MegaFlag. Our Boy Scout Manual says people shouldn’t walk on a flag no matter how big it is!

CapeTown South Africa, 2002. I discovered the best kid’s kitemaking program I’ve seen yet! Too often we hand kids kites and let them run amuck. They long-line – they drag – they tangle. And more often then not, they don’t fly well.

In CapeTown they provide schools with kite skins and a festival theme weeks before the event. Then the groups arrive on festival day to assemble the skins into ten-kite arches.

Anyone who has been on a field with 400 novice fliers will immediately see the merit of making short arches instead of long-line individual mayhem. And of course, each school had parents, staff and other kids in attendance to swell the spectator crowd. Kites were judged for artistry, craftsmanship, and adherence to the theme. And best of all, the kites actually flew! 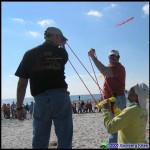 Everyone does candy drops. But how often do you see them done when there is no wind??

The good folks down at the Carolina Kite Festival have the answer. They pulled out a big water-balloon sling-shot and propelled wads of candy into the sky.

Pretty amazing. And it actually worked well. Heck — if I didn’t sell big lifter kites, I might encourage everyone to do it this way.

When all else fails, wear them out!!

It was about ten years ago that I first proposed strapping kids into our big baskets and making them run upwind. I called it the “Running of the Bols”. Susie thought the idea was crazy.

Goes to show, I guess, that even wives can be wrong sometimes. Because Bol Racing has caught on big-time. Click here to see a short racing video.

So there you have a couple of constructive ideas on what to do with kids at a kite festival. Let’s see which you like best! After you vote, you can see the results from other readers.

Ok — ok. So now that you have voted, let me say that there are other things to do with kids on the beach. Here’s a link to a story that took place about 40 miles from here that may give you some ideas. Be sure and click on the video….