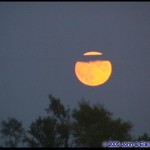 About an hour before sunset and moonrise the clouds gave way to clear skies for a spectacular sunset and a clear, beautiful full Harvest Moon. And after all, it was the moon that was the showpiece of the event.

“Nearly everybody has a connection to the full moon,” Cosby said. “For some it’s spiritual. For others it’s magical or mystical or romantic. Maybe they simply connect to its beauty. For the two of us, watching the full moon rise is all of those.”

The Harvest Lights Festival grew out of one such magical, mystical experience for Pegasus.

“The night of the full moon in August we had a little breeze as we got close to sunset. Wind at that time of the evening is really unusual here in Michigan,” DeRoover Cosby said. “We grabbed kites and lights and headed for the park. The rest of the evening was truly magical. The wind stayed steady straight out of the west. As the full moon rose, we had our lighted kites flying right in front of it.”

In the dark, when just the three points of light on the kites were visible, a man walked up behind the flyers.

“We thought it was somebody from the township, coming to tell us we weren’t allowed in the park after dark,” Cosby said.

Turns out, the guy was driving by on the road outside the park and saw the moving lights and couldn’t figure out what in the world (or out of it!) he was seeing. He turned his car around and came back to find out. After twenty minutes of watching and talking with the Cosby’s, the man (whose name they never did get) said, “Well, my wife and kids are waiting in the car. I’d better get back.”

“I think the idea for the festival was born right then and there,” Cosby said. “We just didn’t know it yet.” 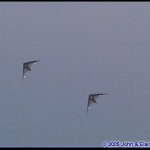 As an idea for a festival, it had a lot going for it – the curiosity factor of lighted kites flying in the dark, opportunities to involve other interests and organizations as sponsors and participants, a chance to have kids make and fly their own kites, and of course the attraction of the full moon.

What the event didn’t have was a lot of time. The Cosbys had less that four weeks to have a festival ready for the next full moon.

Within a few days Cosby contacted the township parks director and got permission to use the park after dark. A brand new sponsor came on board to help defray some of the costs. A friend working with the Red Cross began working to bring evacuees from Hurricane Katrina to the festival (a project that unfortunately didn’t pan out). Volunteers were recruited to staff the park’s concession stand.

Despite the short time frame, the calendar was actually another positive factor. The next full moon was the Harvest Moon, the full moon closest to the autumnal equinox.

“All full moons are magical but there seems to be a special magic about the full moons at the time of the equinoxes and solstices,” Cosby said. Many ancient religions (and some modern ones) have important festivals at those times.

A number of full-moon celebrations include “drum circles” where people gather to beat out rhythms on a variety of percussion instruments. For Cosby including a drum circle became an important part of the festival – and one of those opportunities to reach out to other interest groups. Cosby contacted a number of drummers and drum circles.

“We really wanted drummers there to welcome the full moon,” Cosby said. “And we loved the thought of flying to the drummers’ live accompaniment.”

All of the drummers and established drum circles Cosby contacted had other commitments for that night and couldn’t make changes in the short time available.

“I pretty much gave up on the idea of drums for this year,” Cosby said.

But on the morning of the event the Cosbys got a call from a drum leader who was available and willing.

“Kathryn Mihm was fabulous. By the end of the evening people who didn’t even know what a drum circle was before the festival were in the circle.” 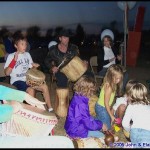 The drum circle proved to be as important for keeping the crowd entertained as Cosby thought it might be. The wind god Aeolus wasn’t quite as kind with the wind as he had been the month before. There was a little wind early for Pegasus’s first demo and some light-wind flying by Tom Deck. By the time the moon rose, what little wind there had been left with the clouds, leaving Pegasus backpedaling to keep their ultralight Mojos from Blue Moon Kites in the air. 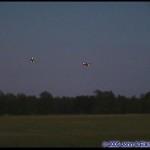 Still, the crowd of more than 200 saw what they came for: lighted kites flying against the rising full moon.

Cosby said, “A man came up to me and said, ‘it’s too bad there’s no wind.’ I said, ‘yeah, but look at that gorgeous sunset, that spectacular moon, that crystal clear sky. And all these people! Any kite flying we get to do tonight is a bonus.’”

The light wind created a perfect opportunity for Pegasus to make nearly 50 paper bag kites with children and families. The kids had a blast running every which way with their kites. And since there was no wind, it didn’t matter which way they ran. The little kites flew perfectly.

Will the event be back next year?

“We’re planning on it! Any excuse for a festival.”