It all started off so well-organized, peaceful, and relaxing. Little did we know what we were in for. We got to Pacific Beach on Thursday evening, waited out the Friday morning fog by having breakfast at “Paddy’s Perch,” got all of our stakes pounded into the very hard ground, and erected all the wind toys and banners. Flew a few kites. In fact, our “Happy Face” was the last kite left flying that night, long after dusk. The weather was mild, so we left all the ground displays up overnight.

Saturday morning was calm and a bit foggy, but it cleared early. We wandered around and visited, and finally had enough wind to start putting up some kites around 11 o’clock. Jerry put up “The Face” and the Bee-Line with the Mockform Albino Bee (a.k.a. “Albeeno”) at the top of the line. They all flew happily for some time. John and Marzlie Freeman had their delightful banners up at their campsite; the Lilac City Windchasers were out in full force; and the beach was covered with banners and kites from Bob Serak, Ellen Pardee, and Dick and Georgean Curran.

And then odd things began to happen. Some of the kites started acting up a bit–could not decide whether or not they wanted to fly. Jerry was away from our camp–down at the beach trying to troubleshoot a kite that had been returned to Scott (Hy-Flyer’s Kite Shop). Stan Shelhamer was at our camp and had gloves on, so he helped me get the face to behave better and I finally got it higher up in the sky where there was a better wind. Stan and I looked at the clouds and heard thunder south of us, and agreed that we were lucky that the storm had bypassed us. The wind was blowing toward the south and the northern sky was nicely blue. What we did not realize was that the winds at the higher elevations were going in a different direction.

Suddenly “The Face” tangled with another kite that had lots of twisty tubes hanging from it. We just got that untangled and everything seemed to be going fine, when… The “Bee-line” suddenly started to shift directions. There it was, the Albeeno at the top, two bee windsocks below that, then 4 of the kichi tako guys. Naturally, the face immediately got itself tangled with one of the bees, and the winds kept shifting at the higher levels and dropping off at lower levels. I was working with the face again when the line that anchored the bees suddenly caught in the bee windmill. I yelled to Stan, who grabbed the line of the bees while I tried to get the windmill pole down. This was when the wheels came off!

I was pulling up on the fiberglass pole holding the bee spinner, and could not get it up far enough to clear the rebar holding it. The pole started to tip and the top of the rebar started to crack it. Suddenly, the bee windmill top lifted off the pole, climbed up the kite string, crossed the road, and finally, fell off again, landing near the restrooms close to Sy Polzin who was sitting under the WKA headquarters canopy and snapping photos of our efforts. 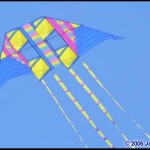 Meanwhile, I managed to pull down the face kite while Stan and Jerry (who had just returned) fought with the bees. The Albeeno landed neatly in a tree that was on the far side of the campground, across the other part of the campground loop road. That left strings across both roads, and six bees scattered across everything. People came from all directions to help round up the critters. Somehow, the bees were all detached and stashed under the awning next to the bus. It took a banner pole to pry the Albeeno out of the tree. And by then the rain was falling.

Similar scenes were taking place throughout the campground and beach area. Banners were being stashed under the awnings of complete strangers; people were chasing each other’s kites; the non-kite people in the campground were joining in the melee, sometimes in helpful ways and sometimes just adding to the general confusion. The entire campground was mobilized and getting soaked.

Banners, spinsocks, etc.- poles and poles of them. All over the place! Lots of people helping as we grabbed, pulled, stuffed. At our camp, we managed to get everything either stuffed into the back of the pickup, into the bus, or under the awning. A total jumble and wet, wet, wet!. Then the heavens broke with thunder, lightening, and hail and everybody ran for cover.

My sweats were soaked clear through and I pulled them off and crawled under the electric blanket! After the storm, Ellen Pardee visited, fresh from her warming shower. She suggested that maybe she was going to have to make some giant flyswatters and cans of Raid to use next time the bees decided to swarm the campground.

We all got dressed and went to dinner at the Naval Conference Center. Good friends, lots to eat, and we won quite a few things in the raffle and 3rd place for our campground display. I dropped into bed and fell asleep with a book in my hand and the lights on.

Sunday was clear and sunny, so we put everything out to dry. Several repairs were needed. We went to lunch and visited with friends. Got back and even more stuff had fallen down and been picked up by neighbors. No major damage, but it introduced another batch of new people to the joys of kite flying. 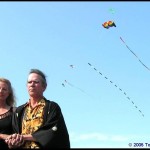 Jerry was tidying up when we looked at the clock and realized that: WE WERE LATE FOR THE WEDDING ON THE BEACH AND WE WERE BRINGING THE FLOWERS! Tom Tinney (of “Tom Tinney’s Terribly Tiny Kites” fame), having reached the more mature age of 50, had planned a beach wedding with Colleen, his former wife and the mother of his son. We’d seen her earlier in the day and offered her the bouquet of dahlias I’d brought along. Colleen thought that was a great idea so the dahlias became the bridal bouquet. We got them there just in time to take the wedding pictures so it at least looked like she had a bouquet for their wedding. Many members of their kite-family had joined them on the beach for this occasion.

They were married by an odd lady who was the local equivalent of “Marryin’ Sam.” She performed the ceremony quite beautifully, but from there things went south in a hurry, as we discovered when some of us adjourned to the Naval station for a small party and cake.

She was also supposed to be taking pictures of the wedding, the happy couple, the guests, and just about anything else that struck her fancy. Normally this isn’t a problem, but a few of us noticed that she had been taking pictures for quite a while without changing the film in her 12- shot camera. When we asked her about this she growled at us that she knew what she was doing, so we backed off. However, I noticed that several other people had pulled out cameras and were duplicating as nearly as possible the shots she should have been taking. So, with her 12 shot camera, she took about 100 pictures. 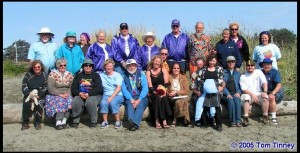 When she went to leave, she could not find her car and Tom had to escort her there. Then, we watched as she had trouble finding her way out of the parking lot. We just hope that she did a better job of registering the marriage with the local court system or Tom and Colleen still won’t be officially married. However it works out, we hope they are as happy as they looked when they left, and we are all looking forward to seeing them next year so we can ask them if they ever got their copy of the certificate.

What the week-end boiled down to is that if you want to get new people involved with your kiting, drop your kites all over them. That’ll give them “hands-on experience” and show that there is nothing quite like the challenge and thrill of kiting!