Up for another early morning, we found ourselves back at the convention center around 9am and browsing the trade show which officially opened today… 59 booths contained 22 exhibitors, and 59 retailers have registered thus far.

Making it an easygoing morning, we took the opportunity to relax a little and touch base with some of the booths we missed previously.

Just short of 11am, we made our way out to the beach where demonstrations were scheduled to be held from 3pm to 6:30pm. Paul Dugard from Premier, Robert Randolph, his brother Steven and I were the only ones out so early… Winds were averaging in the 8-12mph range, and definitely a bit cold with the wind chill.

We had the new Jumping Jack Flash from Level One and the Freestylist from Skyburner with us, eager to finally put our hands on some new products from the sport kite side of the show… The Revolution folks showed up around 2:30pm, with nearly everyone else arriving after 3pm.

Single lines displays kept the sky full the rest of the day thanks to Premier, Gomberg Kites, New Tech, KSM Toys and a few other vendors… Dodd Gross came out with his French Connection, and HQ showed up later in the day with their new Gallego sport kite and some power kites.

As we wandered up and down the beach testing kites, I think nearly every dual line kite we tried prompted us to ask the manufacturer, Got Weights?

It got the point where we were putting on anywhere from 15 to 35 grams of added weight to get the pitch tricks we were looking for, even a AA battery at one point for giggles! Not so much that the kites on hand weren’t capable, but the manufacturers are almost always a little behind the regular flying community with regard to what’s hot and what’s not in modifications.

After talking with Rob a bit, we both agreed that our personal favorite kites were the Jumping Jack Flash, Freestylist and a very surprising entry from Flying Wings… Having designed the Beetle a couple of years ago, these folks have come up with another home run called the Acrobatix.

Never mind the fact that these are some of the nicest designers you could ever hope to spend time with, this latest entry into the market proved to be amazingly capable in both the precision and trick department, at a keystone price of only about $80!

Having spent most of the day cruising the beach, I didn’t get too much into the mid-level and entry level kites, sticking instead to the handful of middle to high end kites… We’ll be sure to get a bit more information on the new products tomorrow and the day after, bringing it home to you.

As we were headed off the sand with our gear, I really enjoyed a beautiful Florida sunset and the sight of three ladies out with fire wands of some kind, swirling and putting on a little bit of a show as the sun dropped out of sight.

Getting back to the convention center around 6:15pm, I stopped by the deli downstairs for a burger and fries, first meal since much earlier in the day… Finally, a chance to sit down and catch my breath!

Just after 7pm the 18th annual KTAI business meeting came to order… Much of this session brings the general body up to speed with what is going on behind the scenes, the past year, what we can expect from the KTAI in the future, and who’s going to be involved in the committee.

A few months back, the KTAI trade show was scheduled to take place in Biloxi Mississippi but plans were scattered by the extreme weather in the south, almost literally decimating the site reserved by the organization… This, coupled with a short notice change in management companies to the Center for Associated Resources, gave the KTAI roughly 90 days to scramble and get another trade show organized at a new venue when there were literally thousands of other trade shows in the same situation, hustling for many of the same venues.

KTAI treasurer Don Dixon delivered news that the organization could likely survive at least two more years even with numbers declining as they have been… Which ultimately gives the KTAI a safety net of sorts, ensuring that we’ll have a little time to reorganize and rebuild.

With approximately 157 members as of tonight’s meeting, Mark Monaco from the Center of Associated Resources stressed the importance of defining and implementing a survey to current and past members, as well as non-members, to find out what it is that they expect from an organization – all in an effort to bring a big picture into view as part of planning for the future… Mark’s company specializes in this type of work, and will hopefully help bring the organization breathe life into itself. 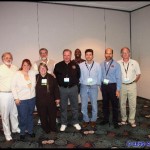 When all was said and done, the room voted on the nominees for Board of Directors and brought together the team for 2006.