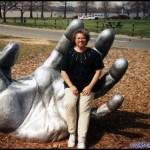 This was Betty’s 14th convention; Her first was an impromptu, impulsive thing to attend the Jacksonville, FL convention. Being new I suggested she volunteer at the registration table. No better way to meet everyone. It rained most of the week but the hotel lobby-bar brought everyone to a central area and it was the best convention she ever had. First timers are always looking for the best time.

Soon after the convention registration came out I signed us up. #50 and #51. All it took was to fill out the paper work and have her sign the waiver. This is your goal. OC-05.

She didn’t make it personally, but her spirit and physical remains DID.

She Did Make It

I started her spiritual attendance with her registration. Maggie Voss (convention manager) was contacted, She knew about Betty’s passing (leaving the building). So I stated that Betty would not be able to attend for medical reasons☺and could I roll her registration over to someone who wasn’t able to attend for financial reasons. Yes, was the correct answer! After checking with the RD’s form region 1, 2 and 3, with no confirmed response. I contacted the AKA’s President. His theory was that there were many Sport Kiter’s that qualified to compete (1 throw 5) at the Grand National sport kite computation, but could not attend. Maybe one of them could benefit from Betty’s passing and giving personality. This is something Betty was known for. Giving back.

Betty started in kiting as a Sport Kite flyer. She competed vigorously, participating in many Eastern League events. The best she did was second at SSKC in novice precision. With attending so many events Betty racked up enough points to be invited to compete at the Seaside convention (Grand Nationals) in 1993. Placing last didn’t deter her sprits, she continued but was limited in skills. Competition wasn’t her only love, she judged at many events too. Then In 1994 she found her real calling. Secretary. After ten years of exceptional service she was honored with the Bob Ingraham award.

Back to the story.

The BOD was made aware of the situation and a special person was chosen. Vern Balodis from OH. I have known Vern for some twenty plus years and Betty was fond of him for as long as she had been involved in kiting. She did start out as a sport kite flyer and this, give back, to Vern was a message from God. At first Vern thought he won the AKA convention registration raffle. Then when he picked up his registration packet at OC_05 he learned why he was there. Since he lost his mother recently and was having some serious medical problems recently, and unable to work, he had been disconnected from the kiting word. He was shocked by the news of Betty’s passing, but honored to be her replacement. Vern had the homer of wearing Betty’s AKA-Secretary red name tag whenever he wanted to.

In the past, name tag (Convention ones) exchanging was popular.

Confusing to a lot of people, but it was fun to ask someone if that was them or not. Great opening line. That was finally stopped. Corey Jenson was a major proponent to the trading game so I tagged Corey first, in Ocean City ’05. Betty’s metal AKA secretary nametag was placed on him with these rules. When someone asked, “Why are you wearing Betty’s name tag”, or “Your not Betty”, or any simpler statement, Corey had to share a story about Betty and ask the questioner to share a story with him. Then pass the magnet-backed nametag to the questioner and explain the rules. I also started the same memorial with a magnet backed metal nametag that was Betty’s SJKF secretary badge. Lots of people were honored to be Betty for a brief period and tons of stories were shared.

It was a good thing I smoke. Visiting the back porch of the convention hall lead me into yet another, persevered confrontational convention with Corey. I was surprised that he stated he was asked to do a Betty Name Tag presentation during open mike time. Well Corey your addiction to nicotine is killing you and inhabiting your obligation. Open mike time is NOW.

Off we go. He did a respectful presentation of the badge trading- sharing game I started. Asking all wears to standup was very rewarding for me. To see how many people participated was great. I did get to here from a few people on what their story was and what the story was they received. What a blast.
I did joke with some people who really know me about more people respected her then me. They agreed but thanked me for the good times could be had with my game –plan.

When I started this with Corey, he loved the concept and asked if “I do it for him.” “Sorry Corey, we have disliked each other for more then two decades and you need to find another fan club member.” “ BETTY is to special to me and so many others, that’s why I did it.”

As a planed activate, of the convention, a white kite, mass ascension, fly was planed. This year was to honor passed AKA members or family members of AKA members.

I flew a modified rock that was a prototype for a class I taught at MAKER. The winds were strong and tricky. She flew nicely then like her and the wind conditions, she would be difficult. My apologies to Dave C. For clotheslining him.

Betty spice: A peppershaker full of some of Betty’s physical remains spiced up the field. Sharing these activities with many others helped them get over their grief of Betty’s passing too. At the end of the fly a good friend ask if I was going to let the kite, Betty, go. Why not. I let all the line out (500’). The wind was better up there and Betty flew stably. Well, why not just tie it off and leave it there. One lone kite. While trying to tie the line off it got away. The kite dropped a lot then when the long line length dipped into the ocean, drag increased and Betty started rising. Just a dot in the sky and still going. She did like to travel and I hope she made it to Newfoundland.

Betty’s Estate contributions to the AKA Convention in Ocean City, MD.

A large woven Hata style kite, I made for her, was designated for the bag raffle and did very well with two bags of tickets. Rob Cembelest a good friend, and respected AKA volunteer, of both of us took it home.

I gathered Betty’s AKA pins together. Placed them in a shadow box and once again demanded they were in the bag raffle. The auction Chairperson, received lots of grief for this choice. “You can get more in the loud auction”. That wasn’t Betty’s or mine philosophy. Let the little guy or GOD decide, not the size of your wallet. Susan Skinner a long time volunteer of the AKA and volunteer festival-convention organizer took them home.

I used these as, pick me ups, during her thirteen-month struggle with chemo’s side effects. One of those was in the bag raffle too. Phil Scarfe took it home to England in first class.

I got to draw the bag raffle tickets. “There is a higher power.” “ She and Betty guided my hand” I’m sure all of them will enjoy their gifts from Betty.

Betty made a Della-Porta, Borgello graphic kite at a Keystone Kite Retreat. Even stayed an extra day by Cinda Shannon’s request to finish it. Tail time. Betty would always ask, beg, or bribe me to finish her workshop kites. NOT this time. “You want a 3-D fuzzy tail You have to make it, yourself.” After many sessions of compromising and demands, we worked it out. WOW, Betty finished a whole kite, physically, on her own. New proud owners. Dixons, from NC.
They have bought many other notable kitemaker kites for many decades.

The Artist Comes Out:

Betty designed-created an originally kite at a MKS workshop with encouragement from Pierre Faber. The construction paper model was framed and the finished kite was displayed in a show box, ready for flight. Her artistic skills shined in this piece. Gale Woodul, Texas. Another AKA ICON and supporter of Betty was honored with taking it home.

But, what about the Scott:

Well, I served my self up all week as pink on the out side, but blue on the inside, (not shown). That’s the way I was. Glad to be there but really sad not to share it with her.

Unlike Bazzer I had time to mentally prepare for a week of sharing feelings and emotions. As planed I shut two doters down. “Pleases don’t do this, I want to enjoy this week and celebrate Betty’s life and your depression me.” “Well, how are you doing.”? Then the good times continued.

Learning About “THE” Betty

Sharing a photo album, of Betty photos, brought great relief and satisfaction to me and allowed many of her kiting friends and distant admirers to learn more about this well love and respected volunteer and kite pilot.