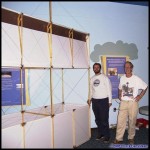 Is a replicate Blue Hill Box kite part of the DF Archive? No. The recently built kite actually hangs at the Museum of Science, Boston. But the DF Archive contributed crucially to the kite’s construction, and the experience of Chuck Donaldson (right) illustrates how kite makers can benefit from Drachen’s archive.

Engineer Chuck Donaldson, working with Don McCasland of Blue Hill Observatory in Milton, Massachusetts, had taken on a project: to build a replica of one of the types of kites used at Blue Hill for meteorological data collection and research. Where to turn for help in assuring their work’s authenticity? Don and Chuck began by e-mailing Scott Skinner, the Drachen Foundation’s board president, to solicit his ideas. Scott knew exactly where to start, but the resource he suggested was not readily available. Chuck responded, “Scott, you refer to the big book, Blue Hill Meteorological Observatory, 1887-1902, as having a lot of specifications for the type of kite that we plan to construct. My problem is that I cannot find a copy of this book. Any assistance that you may be in helping me gain (buy or borrow) access to the data in this book is needed ASAP.” 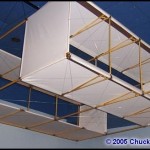 Skinner knew that the DF Archive had a photocopy of the “big book” (made originally at Harvard); he could even specify the pages needed for the project. He asked the DF Study Center in Seattle to assist. Within a week, Donaldson and McCasland had pertinent photocopies in hand and could proceed with the drafting and construction of the kite on schedule. Two hundred hours of painstaking work later, their replica was mounted in a new Weather exhibit at Boston’s Museum of Science. As for Donaldson, this project is only the beginning. He reports, “I found the patent on the Eddy kite and may build one of those next.” 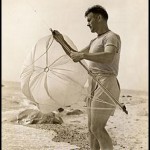 The Drachen Foundation’s extensive archive exists mainly in a two-dimensional format, to better support the organization’s mandate to diffuse information about kites worldwide. Photo documentation is much easier to collect, study, copy, and distribute than are three-dimensional artifacts. 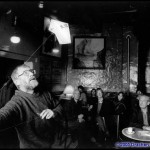 However, the archive does include a collection of choice kites, kite-making tools (often hand-made), and related paraphernalia. Drachen has collected examples of kites important in the early history of weather prediction and in the development of aeronautics. It also collects representative and unusual examples of contemporary kites. 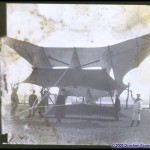 In the historic category, Drachen owns the largest holding of kites and artifacts of Samuel Franklin Cody, the American aviation pioneer of the turn of the nineteenth century who built and flew the first airplane in England. It holds an original tetrahedral kite cell from inventor Alexander Graham Bell, who became interested in flight in his mid-seventies. 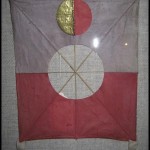 It has a large holding of cultural kites from Japan, Cambodia, India, Laos and China (among other countries), a substantial trove of the royal kites of Thailand, and fifteen Korean fighters more than a century old. It also has contemporary examples of traditional leaf kites from Oceania, probably among the first kites ever made. 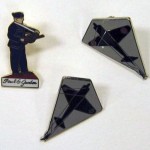 In addition to the three-dimensional artifacts described above, the archive includes personal papers on kites and kite-makers as well as books, newsletters, videos, compact discs, and photographic slides on kiting.

All archive material can be studied by appointment at the Study Center in Seattle. Research service is also available. Although most Drachen material is freely available to the public for non-commercial use, permission to reproduce material must be obtained from the foundation. 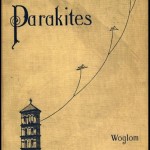 Link to the DF website for more information about its special collections. Drachen has recently completed cataloguing the books in its archive, and is formatting the information to make it available online.