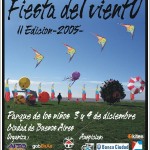 Hi my friends. I’m eager to share with you what happened in the Second Edition of the Wind Party in Buenos Aires, which is gaining importance in our Country, step by step.

As you remember, we started this activity in December of 2004. Fortunately, we were able to enjoy it again this year at Children’s Park – District Capital, December 3rd through the 4th, 2005.

Batoco and Alto Vuelo are still going on, developing and promoting kite activities through different generations.

This time the Festival was held in “Parque de los Niños” (Children’s Park) that lies in the District Capital by the “Rio de la Plata” riverside. It has an excellent infrastructure including security, parking facilities for more than 600 cars, 400 picnic tables, a big grove, and a children’s playground that all provides the chance to share a nice day of recreation. From its wide breakwater, people can see different nautical sports like yachting, kite surfing, wind surfing and fishing.

A bit of history:

The first time that we organized this event, it was held in a place under the “Gobierno de la Ciudad Autónoma de Buenos Aires” (Government of Buenos Aires) jurisdiction. So we had to face a hard bureaucratic procedure in order to make that first Festival possible. We had to deal with ancient laws (from 1900) that forbid kite flying in the DC and further legislation that tried to solve the prohibition but, in fact, didn’t quite accomplish their intended goal. Lots of meetings with legislative, government employees and authorities were necessary to make them understand the social benefits of kite sports and to make them realize about the importance of the event we intended to organize.

Thank God that we worked with some understanding government authorities, and we finally got the permission to allow that first festival happen.

I think that Wind Party 2005 is a starting point to a new future for this sport in Argentina, because we not only got the authorization – we also got a “Particularly Cultural Concerned by the City Government of Buenos Aires” nomination.

This list can help you to appreciate what were the activities and people who contributed to make this dream become real:

What happened on Saturday?

We began at 1 PM, despite the unfavorable weather conditions that were forecast. 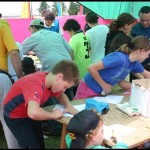 It was a cloudy and rainy day, wind from NNE turn to SW at 15 km/h. The temperature was 18 centigrade degrees. In spite of that we installed the tents, windsocks, banners and sound equipment on the arena grass, which looks emerald color. 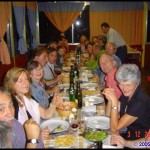 Some people visited the free kite building workshops, others were looking an amazing demonstration routine performed by “Team Contra Viento” from Rosario City of Santa Fe Province, and many were visiting the tents of Batoco and Alto Vuelo asking for advice. About 3 PM the rain poured down, so we had to put off the Festival until Sunday.

On Saturday night we went to a restaurant near Vicente Lopez neighborhood to have a working dinner meeting. We enjoyed a delicious barbecue, drinks, and people made jokes and told some funny anecdotes.

What happened on Sunday?

We finally had favorable weather conditions. It was a sunny day, the wind blew from the E at 12 km/h turning to SE, and the temperature was 25 grades centigrade. But we knew that after 6PM rain was forecasted. Imagine holding the Festival between two storms. It was so risky!, wasn’t it?

In spite of this, 8.000 people attended during the day. The music encouraged people to go closer to the arena to enjoy the routines and lots of programmed entertainments. 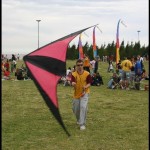 Also, a bunch of children with their parents shared the free kite building workshops and lessons about how to fly acrobatics kites. (2,500 kites were built at this workshop) 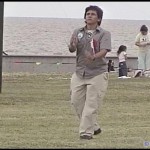 At half past 2 PM, “Team Contra Viento” began their demonstration. We could hear the first applause while the “Los Magníficos Revoltosos” team was preparing their quad line flying in pairs show. After marvelous flying from both those teams, a young pilot David Maggioni flew individual routines with Helix kites. David demonstrated that he is very skillful. ¡Bravo David!

Continuing with the activities, we put some stacked acrobatics kites into the air, dancing with the music. Because the audience continually applauded this particular demonstration, we had to perform it twice. 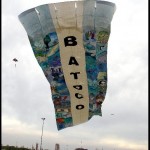 At 3 PM The “Fuerza Aérea Argentina” (Argentine Air Force) orchestra came to play live music. The announcer told the audience that we would fly the Delta Flag Kite and the Mega Project called “Alta en el Cielo” (High in the Sky) from Batoco. The Fuerza Aérea Argentina orchestra began to perform the song called “Aurora” while those kites took off. Imagine lots of feelings coming up to the surface. That song is very important to us because it is filled with patriotic feelings and it describes most important symbol representing our country – our flag. Every single Argentine used to sing “Aurora” at school each morning when the flag was raised. That’s why all the emotion emerges from us when this song is heard.

My friend Gustavo Sonzogni explains what happened next:

…¡ You know that every year the members of Batoco develop a Construction Work Team. This time they had proposed to build a huge kite made of 65 canvases of 4.5 ft by 4.5 ft. These patches were handed over and painted by children who belong to the “Grupo Encuentro” from Bariloche (Province of Rio Negro), Special Education Schools of Buenos Aires, famous local Artists, children from various schools, and several members of Batoco, among others.

The artists were allowed to express whatever they wanted on the patches – with one condition: “to keep a bluish tint on the paintings” so that the finished kite would resemble a gigantic Argentine flag at a distance (our flag has the colors of the sky in which it was inspired: light blue and white). So it happened that a great variety of paintings were turned out, showing the creativity and the various elaborate messages delivered by each of the creators: “flowers, animals, landscapes, ideas, wishes, sentences, handprints, footprints, etc”.

Passion made the artists work together as part of this moving project and allowed us to bring it together beautifully. After hours and days of work: gluing, stitching and strategically fitting every patch to match the proper colors, the geometrical figure floated in the air…The landscapes, the little hands painted by those children with particular capabilities, the fishes, the pigeons, the messages… it was a miscellaneous image drawn in the sky on an immense banner of 82 ft long by 29 ft wide…! 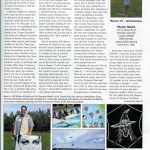 For more information see the article on The Journal of the American Kitefliers Association – “Kiting” Winter 2005, Volume 27, Issue 4, page 51.

After so much activity and energy, it was time to have a relaxed moment. The Fuerza Aérea Argentina orchestra began to play popular songs. It was so much fun to see some people dancing and others clapping in time.

Then the time to begin my own “El Alma del Piloto” demonstration arrived. I planned to perform a Multiple Sport Kite demonstration (The soul of the Pilot) flying three kites simultaneously. 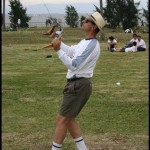 The orchestra continued playing music while I used time to adjust my kites because the wind had dropped. So, before the demonstration took place, the announcer asked me some questions about Multiple Kite Sports like the techniques, training, etc. But one of the questions was, “Gustavo, why do you like flying 3 kites at the same time with independent controls?”

I answered, “The reason is quite simple, but very deep. My kites represent my children. Nowadays I have two, Leila and Nicolás, and my wife is pregnant, our third baby. That is why I fly 3 kites; I always fly with them from my heart. Fortunately, the wind helped me and I could succeed in my presentation. 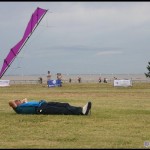 Once I have completed my demonstration, Gustavo Callegari and Roberto Cassanello did a show called “La Guillotina” (The Guillotine). Callegari was the pilot and Cassanello performed as a model. It is kind of a risky performance that consists of launching the kite to the zenith and then dropping it over and straight down very fast near Cassanello´s neck. Then, when the kite is near the model’s neck, the pilot will attempt to stop “imminent death”. To the audience this is very exiting – like Roman Circus…but not so to the model…¡Imagine if the pilot cannot stop the kite in time…! ¡Please, kids and beginner pilots – Do not try that!

After the Roman Circus activity, Marcelo Formaso rode a Buggy. He ran on two wheels, turned the buggy a full 360 degrees, made stop dead and then ran against the wind.

Later on, “The Fabulosos,” or like LAlo said correctly, “El Fabuloso Team,” flew in their fabulous way. You know of these guys because they took part in the Berck Sur Mer Team Championship in France in 2004. They are planning to go again this year.

Let’s talk about 3D Big Kites. We needed some additional efforts for flying “The Southern Dragon” and “The Octopus,” because the wind dropped almost to zero. So it was necessary to summon all the children to get into a line to pull on the string. The Dragon and The Octopus flew gracefully with this “relative” wind.

The last activity was the Mega Team, joining “The Team Contra Viento” and “El Fabuloso Team” that would represent all of us.

The audience could see eight kites, “Alma”(Soul) model, and the eight pilots who represented a hundred souls, all flying those kites in time to the music.

I want to thank to John and the Kitelife team for publishing this article.

¡Happy new year for everybody!