We arrived in Bangkok at midnight – eight road-weary Americans and twenty huge bags of fabric. Travel from Oregon with driving and connections had taken about 30 hours, eighteen of which had been in the air.

Facing customs and security with odd luggage is always fun. But in this case, organizer Ron Spaulding met us at the plane and guided us through the gates. He’d been there all day doing the same for other teams and we were the last to arrive.

Ron had called several months earlier and invited GKPI to help with the event. It was the King’s 60th anniversary on the throne, and the 9th annual Thailand International Kite Festival. Guests would attend from around the world. But in addition, the Thai Kite Heritage Group had been asked to organize a special kite “show”. We would be that show…

The plan was simple – big show kites from around the world – a bigger show of giant octopus – and finally, a really, really big show with one of the largest kites in existence. 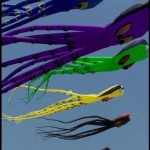 After a flurry of emails, we lined up eight Americans, nine Europeans, five Japanese, two Australians, and a New Zelander. I’d handle North America and the Pacific, Gerard Clement would coordinate the Europeans, and we get Masaaki Modegi to take care of the Japanese.

Ron would host the Thai, Malaysian, and Indonesian teams himself.

The group had gathered in Bangkok on Thursday and connected by bus to Cha-am Friday morning. We’d be staying in a luxurious beach resort hotel and flying on a grassy field near the Royal Palace. Friday afternoon, we went to the field, spread out our gear, and did our best to entertain the media. Late in the afternoon, the festival guests arrived. Between us, there were more than 100 kiters from 15 nations. Our show fliers comprised 1/3 of the group but 9/10 of the fabric.

Saturday late morning, we returned to the field where the Royal Princess was scheduled to open the event. Over 300,000 spectators were expected. We were asked to wait until formalities had been completed and then launch a mass ascension of Giant Octopus.

Spectators lined the road waiting patiently for a royal arrival. We entertained ourselves by teaching the scout troop across the roadway to do a progressive wave. The day grew warmer but police and military guards kept us from crossing the street to the ice cream stand just meters away.

Finally, the motorcade passed, the formalities were completed, and the signal came for a launch. First one – then three — then six. Two more. No one had ever flown more than eight in one place! But two more after that. And then another two!! We had a dozen Giant Octopus in the air from five nations. It was a Wall of Octopi! And they had risen in less than five minutes. 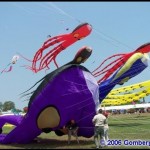 Standing there among the waving tentacles, we all realized it was a special moment. 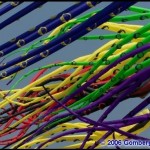 The venerable Shakib Gunn, global kite personality from Singapore announced it as one of the two or three most memorable sights of his long and distinguished kite career. A high complement indeed!

I noticed Peter smiling. Some of us thought he was counting tentacles. Others suggested he might be counting dollars…

The USA Contingent spread familiar designs around the field. Susan and Al showed a Gecko, Pete Dolphin amazed with his Rainbow Arches, Al unveiled his Mama-Meanie, and I opened up the new Zimmerman Stars.

Guest fliers from Indonesia, Korea, Singapore, Taiwan, and China added to the show. A ten foot tyvek Elephant was delightful. Traditional characters adorned cellular kites. Combat teams in crisp uniforms competed with the Chula and Pakpao. And a stunning leaf train reached toward the heavens.

And framing the field each day were the 16 foot tall WindFeather Banners of Kurt and Faye Lisk. Each display was made from 36 banners comprising one large image. The first represented “Aire” and the second, “Fire”.

As if that weren’t enough, on the far side of the field, we inflated the largest kite in the world.

Originally, we’d been asked to bring the Gomberg MegaFlag. But transporting 500 pounds of fabric to the far side of the planet is expensive. And besides, we didn’t think it polite to fly a giant American Flag in another country. So we invited a sister-kite, the Mega Moon of Japan.

Mega Moon was commissioned by Modegi San of the Japan Kite Association. It is exactly the same size as the Mega Flag and was first flown in Tokyo in January. Modegi asked the GKPI crew to help with launches while Peter Lynn and Jim Martin (GKPI MegaFlag Manager) directed.

Organizers had provided a platoon of Thai Marines to help with launches and stabilizers. Typically the kite is balanced between two sidelines which can be handled in light winds or anchored in stronger breezes. Susie reveled in ordering the trim young men around.

Flying enormous kites remains an exhilarating experience. But the real challenge comes when it is time to take them down. You can’t simply walk a 10,000 square foot kite to the ground.

The answer is that we’ve attached a deflation line to the trailing edge of the huge foil, and connected the main flying line with an emergency release. When the main line is disconnected, the kite rolls back over the deflation line, spills the wind, and falls safely to the ground. The ‘thud’ you hear is the line and sail giving way. The gasp is 25,000 people wondering if something has gone wrong. 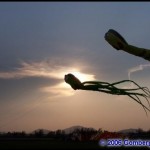 Each night the kite teams ate dinner on the field. As the sun set, the local crowds grew and huge spotlights searched out showpieces in the sky. And with most gear packed away, we were able to spend good time with friends and renew old acquaintances.

One of the special joys of international kiting is the privilege of growing close to people from Australia, Japan, France or China and seeing them on a regular basis.

Monday morning, we traveled back to Bangkok. We settled into our hotel to pack dirty clothes, souvenirs, and memories. The last gathering of the trip was a dinner cruise on the Royal River. There was music, traditional entertainment, dancing, and lots of laughter. Most of us avoided the spicy Thai food knowing we had a long flight the next day.

My new friend “Bird” who had helped stuff bags and supply us with cold water all week listened patiently to my stories. “Do you believe him?”, asked Pete Dolphin. “I am trying to.” replied Bird.

The wake-up call came at three for a six a.m flight. Our new Thai friends seemed happy to take us to the airport and sad to see us go. The USA team gathered one last time to fly “invisible” kites in the terminal. A mere 30 hours later, we’d all be home in our own beds.

If it is still online, you can see the Reuters News Service video of our Thailand Kite Festival by clicking here.