On the morning of March 19, 2006, the kite community lost one of its patriarchs, Robert Stevenson Price of Burtonsville, Maryland, to pancreatic cancer at age 83. He had suffered from diabetes for several years, but still managed to attend 26 of 28 annual American Kitefliers Association conventions, including the most recent one last October in Ocean City, Maryland.

Bob led an active life, which included a career as Research Physicist for the U.S. Naval Surface Weapons Center. He retired in 1983 with an award of appreciation for 35 years of service, but, thereafter, he plunged into extensive volunteer work. In 1985, he was honored with the Washington Evening Star Cup for membership services to the Montgomery County Civic Federation. He was also active in the Columbia Road Citizens Association and the association of government retired workers. For more than 25 years, he was a supporter of the Cousteau Society. And of course, as we know, he found time for kites.

He was a member of the AKA starting in 1972 and served it in many capacities, including president in 1987 and Archivist in the 1990’s. As Brooks Leffler wrote in the AKA journal:

“Bob Price has a good chunk of AKA history locked in his head. More than that, stuffed away in his basement and garage, along with the O-gauge electric train, ancient power tools, camping gear, electronic detritus and other relics of Bob’s career as a technological jack-of-all-trades for the Navy … are the AKA Archives. There are 3,500 items in all, with another 1,500 or so waiting to be cataloged. The Archives occupy five file cabinets, a huge black safe from his wife Jewell’s father’s grocery store, shelves in the bomb shelter, and steel racks in the garage. The Archives exist for two main reasons: to record the operations of the association, and to maintain historic records of kite studies, activities and achievements. In practical terms, this has meant the accumulation of all sorts of stuff… [to organize it] Bob wrote a cataloging program on his primitive personal computer. That software has been upgraded…and is still in use today.”

The collection continued to grow until later in the 1990’s when Bob finally was able to bequeath the Archives to others, first to the Drachen Foundation in Seattle, which in turn transferred them to the World Kite Museum of Long Beach, Washington. The Museum recently moved into a larger building, which has more room for the Archives; the Museum staff and the AKA keep adding to them. 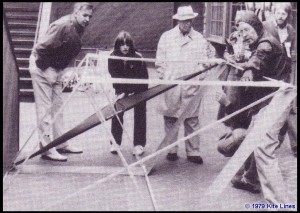 But Bob did a great deal more than archival work. First of all, he was noted for his magnificent box kites, especially his rhomboid designs. The kites were constructed to produce optimum balance between lightness and strength; to achieve this Bob made his own hollow, rectangular-section wood spars. His kites often won awards, including the Grand Prize at the 1976 Maryland Kite Festival and the Evolutions in Flight trophy at the 1997 Smithsonian Kite Festival.

Bob was a serious student of kites. He built a wind tunnel to test the efficiency of different wing surfaces. Over several years, on a weekly basis outdoors, he would fly different kites to measure and analyze their aerodynamic behavior in different weather conditions. He wrote articles on technical topics, as well as letters to fellow enthusiasts. He was a fully involved member of the AKA committee on kite safety, and was one of the first members of the recently formed AKA committee on kite world records. Bob was active on the local kite level as well, serving on the Maryland Kite Society’s Board of Directors for many years. 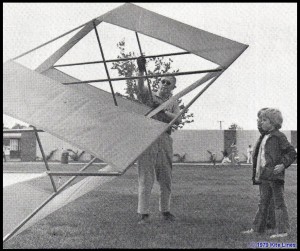 Bob was a practitioner of kite aerial photography; he took photos of flying fields, topography and properties of interest. Further, he was well known for his kite reels, including his entertaining combination bicycle/hobby horse/kite reel, on which he could bring in a kite by foot power. He was a judge of kite performance at many competitions over the years, including the AKA’s national meet and the Smithsonian Kite Festival. His regularity at kite events was legendary; he could be counted on to come to Maryland Kite Society gatherings and even to host them, with the gracious hospitality of his wife Jewell and his two daughters, Diane and Marae. He and Jewell would travel long distances in their motor home to conventions or important gatherings. The sight of the “MoHo” on the kite field was a reassuring indicator that refreshment would be available to tired kitefliers.

Bob and Jewell were Life Members of the AKA and were specifically recognized in 2001 with the AKA’s Robert M. Ingraham Award, for a lifetime of contributions to the association. Bob’s quiet, self-effacing manner did little to draw attention, but those who knew him felt his recognition was barely adequate, that in fact the name Bob Price attached to an award was more honor to the award than the award was an honor to Bob Price. A memorial service for Bob is undecided; he was cremated and his ashes interred at his family plot in Illinois.

I can remember many good times with Bob, but two occasions are of note. In 1986, my husband Mel and I were presented with Honorary Life Memberships in the AKA, at the instigation of Bob and Jewell Price. I believe the vote of the association’s board may have been controversial, yet Bob saw it as deserved, and I will never forget it and what it meant to Mel and me at that time.

Also I remember when a group of kiters in the 1980’s were out flying at Sandy Point, near Annapolis, next to the Chesapeake Bay. Winds were strong and kites were frisky. Bob launched a big handsome white rhomboid box, one of his finest specimens. Hardly had the oohs and aahs begun when the kite broke free, flew off and fell into the water. It was obvious the kite could not be recovered. Friends were moaning, but Bob was philosophical.

I think of the kite community as a forest of trees, each tree contributing to the life of the whole. In my years as publisher of Kite Lines magazine (1977 to 2000), I leaned on many of these trees. Bob Price was one of the strongest and tallest of the trees, so dependable, loyal, principled, generous, insightful, helpful…words fall short. Jewell Price said it simply: “Bob was a good man.” We used to say, at the death of a kiteflier, that there was an empty space in the sky. For me, there’s an empty space in the forest. A great tree has fallen.