I attended Kite Party for the first time last year, and enjoyed it so much that I had to make a return trip… Besides, February in Oregon is enough to make anyone crave some sun, sand and good wind. 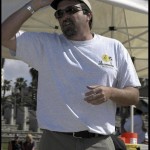 Organized by Dave Shenkman of The Kite Connection in Huntington Beach, this unique event isn’t even officially an event per se… Fliers come from all over the country every year, not to compete, no mass ascensions, they come to – well, party, kite style.

Avoiding the mess and long drive from LAX, my friend Shannon and I booked a flight on United into John Wayne International (Santa Ana) on Thursday morning, picked up a rental car there and after checking in at the host hotel (Howard Johnson), we found ourselves on the beach and flying by 1pm… The fields were pretty well packed with fliers last year, so I was glad to get some empty sky before things got rolling. 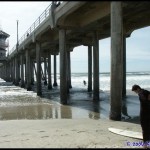 Of all the events I go to, Kite Party has one of the largest turnouts of official Kitelife Subscribers… The first person I talked to was someone I’d been looking forward to meeting for sometime, Mike Kory. A big contributor in the quad heads section of our forum, Mike turned out to be a heckuva nice guy, and not too shabby of a Rev pilot either. <grin>

We were glad to be free of the rain we saw last year (so far). Taking advantage of this, I set up my Rev 1 and made my way over to the pier so I could try something I’d never done before… Starting upwind of the pillars, I hovered my kite in-between a couple, flew it right a bit, hovered in-between two more, flew a little back the other way, hovered in between two more… I must have had my lines switching back and forth half a dozen times, much like running through multiple dogstakes… And yes, at one point I walked forward and hard to the right so that the kite was next to me. What neat place to fly!

Friday morning found us having breakfast with Jim Cosca and Jon Trennepohl at the local favorite Sugar Shack, and just in the nick of time… Not five minutes after Shannon and I arrived, it broke into an incredible downpour, sending people scattering under whatever cover they could find… Good thing we didn’t sit at one of the tables outside this year!

Donna Houchins (MO) came out again this year with some of her beautiful handmade kites, Mike McDonald (AZ) brought out some oldies but goodies including a Nexus stack and a pair of Griffins, Zammi Criste (HI) turned out a stack of Geminis, Allen Carter (CA) had out his black Stiletto and Reactor, John Chilese (NV) seemed to have something new out every time I looked over including a Whangdoodle, Speed Limit, Vented Katana, and more… Out of all the events I attend every year, Kite Party seems to encourage the most rare, unusual, collectible and unique collection of sport kites I’ve seen on one field, from classics to new high-end exotics.

Jon Trennepohl from Skyburner Kites returned this year, unfortunately without his lovely wife Marianne… But, he did have some his new Freestylists with him as well as a few Level One kites, and a small amount of the new, much talked about Black Diamond rods he released this year.

Someone I hadn’t met until this year was Stacey Jones (AxelGirl from CA)… She was kind enough to let me try her Quantum Pro SUL, we spent a half hour or so talking tricks and techniques… She tried my Deep Space, and ended up getting one of her own before the weekend was out. Great to finally put a face to the name! 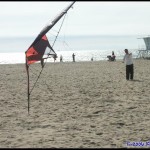 Shawn and Patti Tinkham, Ron Graziano, Stephanie Heibert and Dennis Smith represented the East Coast contingent, keeping Machines, Vipers and even a TC Ultra in the air for most of the weekend. Dennis of course, is the voice of the Eastern League, while Ron, Shawn and Patti are among the very best pilots that the east has to offer… Unfortunately, Rob Autrey wasn’t able to make the return trip this year.

Late on Friday afternoon I saw another Deep Space in the sky down the way, and wandered over to say hello – turned out to be Jim Walmer (CA), and Dan Dalton (KY), taking advantage of the waning daylight… I’d met Dan a few years back at an event in Dayton Ohio, but didn’t really get to know him until this time around… Great people.

That evening a bunch of us got together for dinner at the local Greek restaurant, and while it was good to sit down with a group for a spell, the food wasn’t that great and tended to be a bit spendy… I’ll probably avoid it next year.

Speaking of Revolutions… There were various “pick up” configurations of a quad team going on in the north end of the sport kite field throughout the weekend! Mike Kory, Ben D’Antonio, Dan Burnham, Ron Despojado, Mark and Jeanette Lummas, Jim Foster, Susan Shampo, myself, and a couple of others flew in and out of various formations, following the excellent calls made by Mark.

Southern California’s youngest trick pilot, Alex Herzog was in attendance with his flock of Sea Devils… With some of the fastest hands I’ve seen on a flier, he was tearing up the sky all weekend with Cometes, Wap do Waps and a whole bevy of other tricks. Grabbing more than a few minutes on my Deep Space, he managed to blow out one of my 50# lines, but was kind enough to stick it out and help me re-sleeve them (only broke about 2 feet from the kite).

Saturday evening found us at Lightpost Pizza for the annual Kite Party auction. After filling up on pizza and beer, Dave Shenkman started in with the goodies… One particular highlight was a custom color Deep Space which ended up going to Allen Carter along with a Fallhawk, as well as a custom web site by Kitelife which went to Charlie McClary. Other items included a custom Freestylist, a Fractal Quantum Pro, a Cesium and a full set of Black Diamond rods, just to mention a few of the tasty items to be had at this year’s auction.

Flying my new Deep Space most of the weekend, I’d been playing with the abilities of the roll bars quite a bit on Sunday… Young Alex had done nine roll ups before and had been pushing me to go beyond that since last year’s WSIKF, so I did my best.

First, I came up with eleven and an unroll from that… Then sixteen, then nineteen… Getting the first roll up in, I’d take the kite straight overhead and add anywhere from one to four more roll ups at a time, do a loop one way or another, and come back to add some more… Flying on 80′ lines, I finally got a whole mess of roll ups in (more than I could count) and had the kite no more than 25′ or so away from me… Calling out to Mark Reed who was flying next to me, I had him count off the unroll on this final attempt. I dove the kite downwards, laid it into a pancake, and stepped back a bit… The kite dropped slightly for the first 4-5 unrolls, then it was tacked in one spot while it unrolled the rest of the way and then recovered cleanly… When all was said and done, Mark counted off a mind-boggling 23 roll ups… What a blast!

Southern California’s performance team Too Much Fun also turned up for this event, composed of Mark and Jeanette Lummas (formerly of world champion team SkyDance), Susan Shampo and Ron Despojado (11-time national quad champion)… Flying a combination of both dual line and quad line kites, these guys put on one heck of a show everywhere they go! Switching back and forth between the dual and quad line, in various team configurations, they fly a six or seven minute team routine that is absolutely amazing… Individually, they are some of the best dual and quad line pilots in North America, and it really shows.

A bit later I pulled out one of my favorite demo tracks, Dirty Deeds by ACDC… With the winds picking up to around 15 mph, I was really wailing on the kite, yanking it through the turns to the point where one of my 90# lines snapped… Coming back for a re-fly of the same demo, I got a little further through the track before I ended up pulling one of the spreaders out in the midst of my aggressive flying… Ah well, what can you do? 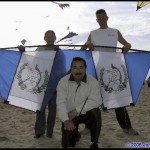 Coming off the field from one of my demos, I was called over to the sound tent to meet a gentleman by the name of Hector Herrera… He’d emailed me several months before, talking about his interest in making kites, and that he was an older guy concerned about being able to pursue this hobby. I’d written back and talked about Ray Bethell, citing the fact that kiting isn’t reliant on age, that anyone can enjoy this amazing pastime. Well, here he was a few months later, with the quad line kite that he made!

Incredibly flattering, Hector set up his kite (emblazoned on both sides with emblems from his home country, Guatemala) and allowed me to fly it… Considering he’d had nothing to work from except the photos and videos on Kitelife, he did a great job and wasn’t a bad pilot either! Many of the Rev pilots in attendance took turns flying his kite, providing input and suggestions… With myself, Ron Despojado and others flying his handmade creation, Hector was absolutely beside himself with joy, describing it as as a true honor to have such accomplished pilots flying his kite.

We didn’t have as many fliers in attendance as last year, but there were still plenty and it solved the issue last year of there not being enough space for everyone to fly.

The two major differences this year, there was no official manufacturer’s photo shoot and fliers didn’t seem to be socializing as heavily at the hotel each evening… Last year there were people hanging out in front on the balcony, doors to their rooms open, people wandering back and forth visiting… Not so this year, not sure why.

But, all in all, this was a very worthwhile trip…

Here’s hoping to see all of you at Kite Party 5 next year, scheduled for February 23-25, 2007… If you haven’t been to this one before, you’ve got plenty of time to plan this great trip to southern California.