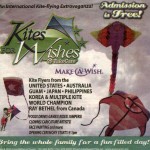 This was the 2nd International Kite Festival held on the beautiful Island of Guam and once again David Gomberg and I were very lucky to have been invited to represent our counties along with other featured flyers representing their countries. Japan, Australia, Korea, also many kite flyers of Guam. It was also great to once again to meet and see Congresswoman Madeleine Z. Bordallo, still very much involved with every aspect of this unique kite festival. Everyone involved did their utmost to help make it even more successful than it was last year, which was indeed a very tall order. And just like last year, the festival was so well organized everything went like clock work. The only difference was that the winds were in the 30 plus mph range, but that did not stop the kite flyers from putting on a great show to entertain all the spectators who came to support their kite festival, as they know that Make a Wish Foundation raises funds and organizes “Wishes” for the children with terminal illnesses. There were 147 Blue “Make a Wish” banners from one end of the flying arena to the other, and each one had a name on of a Guam “Make a Wish Child.” It certainly stops one in their tracks and realize what a great job this Make a Wish Foundation is doing, not only in Guam, but counties all over the world.

Last year I ran into a few problems with my flight to Guam, as my first part of my trip was cancelled so the airlines had to reroute me, but this year every thing seemed to be working okay. My flight out of Vancouver to Seattle, and on to Honolulu took off right on schedule and it looked like I would have lots of time to enjoy a few hours at the Honolulu airport before catching my connecting flight to Guam. We were in the air for over an hour when the captain announced that there was a problem. He had a red light flashing indicating that one of the doors of the aircraft was not closed properly so he did not want to take any chances over the ocean, so he was going to turn around and head back to Seattle and get it fixed which we did. And it took an hour or so to fix the problem before we headed once again to Honolulu, so now my problem was would I arrive in Honolulu in time to catch my scheduled flight to Guam? Phew… this was “panic stations” for me and the 9 other passages that were going on from Honolulu to Guam, plus how was I going to get in touch with the Guam festival committee to let them know we would not be arriving on time? But no worry, Ray help was on the way.

Patrick Higashi the Lead flight Attendant and trouble-shooter of situations like this for Northwest Airline was doing everything possible to help us make our connecting fight from Honolulu to Guam. When we arrived at Honolulu airport, everyone was asked to remain seated except the people that were going to Guam. We were rushed through customs like we were Royalties, and then we were put on our scheduled flight. Continental Airlines had held our flight from taking off on their scheduled time for us, to the delight of all the passengers who had been on our plane. Both of these airlines literally bent over backwards to insure we made our flights. When we arrived 8 hours later in Guam, we were only 15 minutes late. The pilot must have really “put his foot down.” I take my hat off to both of these airline companies, and without any doubt would fly with them again anytime!

On arriving in Guam we were greeted with “Hafa Adai” hugs and a hearty hand-shakes by representatives of the Governor’s office, who even collected my luggage, then in seconds had us through customs and passport check. Then, I was greeted with “Welcome Back Ray,” plus hugs and Lei’s of beautiful delicate shells were put around our necks. We were then driven to the beautiful 5 star hotel, The Reef Towers, and like last year was given a luxurious suite overlooking the ocean and beach at Tumon Bay.

Guam is a very beautiful Island. It is also America’s gateway to the West Pacific and Asia. Its beautiful coastline and pure white sand beaches are ringed by coral reefs and crystal clear water – very safe for children to frolic in all day long to their hearts content. And beyond the reefs it is ideal for swimming, sailing, etc. The waters are also teeming with all kinds of exotic marine life. The blessed balmy tropical climate is ideal for that long awaited vacation which many people daydream about. The Island is only 30 miles long and less than 9 miles wide, so one can take their time sightseeing. Just to name a few places which are a “must,” there is a “War in the Pacific” historical parks full of military relics and unparalleled World War II artifacts, Fort Santa Agueda which was built in 1800, and Talafak Bridge that was built by the Spanish in 1785 (David Gomberg asked me if I remember seeing it built!). And another “must” is the historical “Inarajan” Spanish village, and the beautiful waterfalls that are throughout Guam are worth seeing too. Oh, and I must not forget to mention the Yokoi’s Cave. It is very hard to envision that this was the home of Sergeant Soichi Yokoi who hid in the jungle all alone between 1944 and 1975, completely unaware that the war between the USA and Japan was over.

The people of Guam are the friendliest people I have ever met in all my years of traveling the globe, and I know David Gomberg will totally agree with me. Wherever we went on the Island, we were greeted with a big smile and “Hafa Adai”(which means Good Day, Welcome, Have a Nice Day, etc.). The people are well noted for their hospitality and friendship. One man put it in a nut shell – I quote:

“The very essence of our people is compassion. It’s about caring, accepting and helping one another with open hearts and open minds, Inafa’maolek is the inner strength and treasure of our families. We live it daily, the warmth, the generosity, the deep and abiding respect for our elders. It lives in the hearts of our people.”

Once again, one of the highlights of my stay in Guam was visiting Guam’s Hearing-Impaired children along with all the other International kite flyers. We spent a very happy couple of hours helping the children to make their own kites with first hand instructions given on stage by Mikio Toki from Japan which was then translated into sign language by the children’s teachers, along with hands on-help from all the International kite flyers. The children were so excited and could hardly wait to get outside to fly there creations. For me it was very heartwarming to have so many children that recognized me from last year give me a big hug and the thumbs up sign. It was also very good to see how well they have accepted their disability. What a thrill it is to have these children run up to me and point to my hearing aids, then with a huge smile on their face, point to theirs and give me the Thumbs up sign. One of the teacher told me that I have inspired them, but I think it is the other way around for sure.

After the kite-making, all the children went out onto the school field along with the entire International kites flyers group that gave kite demonstrations to children and adults that had arrived from two other schools. The wind was not the best but we did our very best to put on a show, which was thoroughly enjoyed by everyone. And I must say, by that time we were all ready to enjoy the great lunch that was prepared for us. They have a special way of cooking chicken. It is delicious, and some of the people were going back for 2nd, 3rd, and some for there 4th helpings. I know for a fact that Sue and David Gomberg did, as each time they both tried to push in front of me 😉

After all the months of planning by the Guam Kite Festival committee, the day of the festival finally arrived. All the International kite flyers arrived at Asan Memorial Beach Park at 10am. The kite fields were all set up by Terry Hernandez, owner of the “Chill Out kite Shop,” and members of Team Guam. There were fields for Sport kite demonstrations, and for single line kites, and free flight areas. Soon the school children began to arrive by the bus load and spectators came from every part of Guam. The parking lots were full and the roadway to the park was jammed with traffic. It was estimated that over 10,000 attended this year’s one day kite festival, which was three times as many as last year. The festival was a huge success from start to finish in spite of the 30 plus mph winds. The weather was super – in the high 80s – which is right up my street. It was awesome to feel the sun on my back again. Australia, Japan, Dave and Sue Gomberg, and all the locals filled the sky over Asan Memorial Park with their kites. It is always great to see the families enjoying themselves, especially the children. Before I left to return home, I heard that the festival committee is already making plans for their 2007 3rd Kite festival. So, the big question was, “Would I return if asked?” My answer is “You betcha!”

Once again I would like to take this opportunity to thank the “Make a Wish Foundation,” and also the festival committee for inviting my companion and myself to your World class 2nd International kite festival. And I also for your friendship and superlative hospitality. Thank you Monica and Cliff Guzman, thank you Lorraine Okada, for such a beautiful day of sight seeing especially to Lovers Point which was one of the highlights for Dolores, thank you Lou Lucena for your help in the kite arena and the great evening out, but most of all for your friendship. And thank you the people of Guam for making myself and all the International kite flyers so welcome.