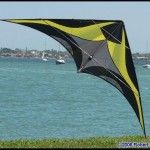 Quality of Construction
The French Connection’s (referred to from here out as FC) construction is fantastic. Behind the standoffs there is a large patch of mylar to protect the trailing edge during rollups and violent multilazies. The spine has is reinforced with mylar as well. The seams are all taped and sewn well. The upper leading edges are cutout nicely and covered and the lower leading edges are covered with a plastic shielding that works just fine in flight.

The nose is well reinforced and while not completely snag-free, any glitches are easily recoverable from on the stock kite. After many hours of flight, including quite some time over concrete, the nose has held up very well. All the connectors are APA. The framing is well cut and everything fits together nicely and the spine is tensioned in the simple hook and loop style.

The first few FC’s will come with a very nice padded bag. I really like the bag!

Bridle
The bridle is a standard 3-point with the outhauls lark’s headed to the inhaul. The angle of attack is adjusted by retying the larks head and adjusting. The inhaul leg is knotted into the metal center T, which I found to have issues occasionally cutting into the bridle line, but I was told that this was corrected in the production models.

Design Features and Tuning
The FC is has a nice set of adjustable parts and some very nice features. First on the feature list is the rollbars. These fiberglass rods are connected to the back of the kite at the trailing edge next to the outer standoff and arc to the leading edge where the yo-yo stoppers would otherwise be. A large improvement over the yo-yo stopper for any rollup action. The second prominent feature is the rollcage. From the yo-yo stopper area to the standoffs inside the sail there is a carbon ‘T’ connecting the 2 portions of the kite. When the lines are wrapped around the kite this keeps the kite’s frame sturdy and less prone to any breakage from a gust or mistimed yank. Despite originally disliking the roll cage, a second go at it really showed their greatness which is described later.

The Inner standoff is moveable along the trailing edge approx 1cm in either direction. The Inner hole gives better precision and snappier tricks, the outer hole leans more towards the freestyle area. Middle is very much a concoction of the two. For the majority of my flying, after much testing, I opted to fly with the standoff in the outer position as the kite is already very precise.

The weight system is simply small donuts that pop onto the 2 part spine. To add or remove weight you simply de-tension the spine and remove the lower portion of the spine, put on your weight and put it back together. There is a cutout in the area where the weight is intended to go to prevent the sail from being malformed by the donuts.

Wind Range
The wind range is listed as 3mph-20mph. While 3mph is certainly possible with the kite setup properly, it no longer feels like the kite it really is when the wind gets up around 5mph. I greatly disagree with the 20mph upper limit. I’ve flown the FC in winds approaching 30mph and still had a great time. The FC is certainly one of the better “standard” range kites in high winds. I did experience breakage of a lower spreader once during higher winds, but it was mostly due to a mis-positioned k2000 (superstart).

Amount of Pull and Sensitivity
The FC has a very even pull throughout the wind range. Occasionally you may find yourself leaning back on the lines in higher winds, but this greatly depends on your standoff positioning. The French Connection likes large movements but reacts predictably to subtle corrections. Unusual Flight Behaviors
I didn’t find much unusual about the FC. If you’re familiar with the current rage of modern stunt kites, then the FC will feel familiar. Occasionally during stalls or side-slides the kite will droop to the side without notice, and anytime you feel the urge to try and gently walk the kite through a trick you may be surprised coming up short with input. Strongest Tricks
Oh by far the 2-point landing is the best trick of the FC. When done properly the kite slams its tips into the ground in an earth shattering scream of “Yes! I’m here, and I’m landed!” It will also scream a single tip into the ground nicely as well. The comete is very solid and nearly perfect as well. Yo-yo’s are very quick and likewise the kite will blaze through jacobs ladders in a blink.

Flatspins are quick and rotate fully. One of the nicer flatspins, the taz machine, is surprisingly easy on this kite.

Most Challenging Tricks
Anything that rotates in reverse. Crazy copter and yo-fade were very hard on this kite. Backspins are a bit tough to get started, but do manage to continue easily. Side-sides are a bit unpredictable at times.

Though the kite readily pitches into position for a wapdowap, the spin is never very flat. I guess the best word to describe the wapdowap on the FC is “wonky”. It’s not hard to do, in fact it’s easy to pull off consistently, but it looks ugly as nothing else.

Holding a fade requires some concentration to lock in. The kite seems to bounce off the bridle as it is pulled into a fade which makes immediate pitch movements easy but holding a fade is a bit tough.

Precision (corners, tracking, speed)
The FC is quite precise. Pop a corner and it hops on a rail and gets going. Corners are very tight and exit is straight. Throughout the wind range the kite moves at a predictable speed and can be slowed down further by loosening the leech line. Similarities and Differences to Other Kites
I’ve heard the references to the Quantum Pro regarding the FC and I see very little in common other than they both do fantastic cometes. While not directly comparable, the most similar kite with regard to handing seems to be The Machine (by Ron Graziano). The feel on the lines is similar (aggressive inputs) and generally the speed and angles of tricks are similar.

In general the FC has a very familiar “competition kite” feel. Not so much a trick kite or specialist, but a capable all-arounder.

Flying Experience
I won’t lie, the first few times I flew the FC I absolutely, positively hated it. I flew some precision stuff and it was great and the kite felt pitchy in the corners so I tried a comete and it was fantastic! I went on to try some crazy copters and it just didn’t work. I just could not connect with the kite during anything. I was very set on hating the kite and letting the whole world know but…

I had the chance to hang out with and fly with Dodd. We flew some other kites for a while and I started to pick up on his style of flying and his first instincts when trying tricks on a kite he was unfamiliar with. This gave me a big clue of what to try on the FC. The next day I was out with Dodd again and gave it another go and with some very conscious and thoughtful flying I really started to enjoy the kite. The next day I flew it on short (40-50ft) lines and from seeing up close the kite in action I gained a fantastic understanding of what it wants. I suspect the majority of this stems from the type of kite I have accustomed to flying (small finesse movements).

Over the next few weeks I’ve learned a lot about the FC. When I had some good dancing music on and just forgot about the world around me, the kite lines became more like the air between the faces of intimate dance partners.

There are some things that aren’t particularly easy at first try for me on the FC, but they were by no means impossible and generally not hard. Unlike many other kites which I find simply take some time to lock into, the FC takes a deeper step into co-operating with the kite. If you try to force the kite, it will respond but not always how you expect. If you try to let the kite do it’s own thing it will do just that… and you may not like the outcome. I feel it’s one of the few kites that “looks back at you” when you’re flying it.

Summary
I think perhaps I’m becoming a bit over-philosophical. After much time flying the FC I’ve seen that it is a very capable kite in terms of precision and tricks. The kite rolls up very well, and is well equipped for it. The construction is superior to any similar kite in the price range and the price itself for what the kite is capable of is absolutely unheard of.

Available from these fine retailers: Kites R Us, The Kite Shoppe