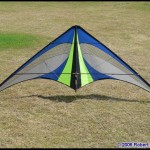 Quality of Construction
The Nebula’s construction is peculiar, but not bad, in many ways. The stitching used is a multistep stitch with an odd shape that seems to work fine. The upper leading edge is covered with a strip of plastic and the lower leading edge is bare. Fittings are mostly APA with a G-force frame. The sail has 1 panel on each side made of beautiful looking Prismatex mylar. It has a nice holographic shine that is still apparent even when in flight. Overall the construction is good and solid.

Bridle
The bridle is a turbo bridle with angle of attack adjustment. As a note, on occasion I had some issues with bridle slippage, but it was easily fixed by changing the knot used to connect to the inhaul leg.

Design Features and Tuning
The Nebula has large zip-tie yo-yo stoppers, covered upper leading edges and angle of attack adjustment on the bridle. The tail weight has a screw which allows you to move it approx 2cm up and down along the spine then secure it in place. The center T looks to have outer ferrules made of brass that add some mass and are strong than traditional ferrules.

Wind Range
The published wind range of the nebula is 3-18mph. My rating based on flying in a wide range of conditions would be 2mph-15mph. While not an ultra-light it was very easy to handle on the low-end of the range. When the wind begins to pick up the lower leading edges shudder. Though I don’t think the kite would break, it was unnerving at times.

Amount of Pull and Sensitivity
Pull is light and inputs are small. Often I forgot the kite was on the lines and had to keep good visual track of the kite. This turned out to be a bonus which helped me hone in on some tricks more than when I perhaps don’t pay so much attention. The light inputs made for some very radical tricks to become unusually easy in higher winds. Unusual Flight Behaviors
During tricks the lines seemed to like snagging on various parts of the kite. Nose, lower leading edge, tail and once the bridle even tangled itself. Some tricks were touchy because the kite moves so quickly, particularly anything involving a flare. Strongest Tricks
Comete and backspins are nice and easy. Sloppy inputs still give good cometes and backspins are a flick of the wrist. In generally, rollups were not as fast as some other kites but they were still easy.

Most Challenging Tricks
Jacob’s ladder is somewhat difficult on the Nebula during the lazy susan portion. Sometimes the kite will wobble cockeyed and a delicate touch is required to continue the trick.

Precision (corners, tracking, speed)
Precision is fantastic on the Nebula, perhaps it’s most significant strength. Corners “pop” into place with a satisfying rattle of the sail. Tracking is straight and solid and the speed is quick. The Nebula is a real blast to fly corners in 10mph winds. Similarities and Differences to Other Kites
The nebula struck me as slightly similar in flight to the Prism Quantum Pro with regard to the smoothness and fluidity of it’s movement. A smaller and lighter feel, but overall somewhat similar in flight.

Flying Experience
My first time with the nebula was in higher winds. I was pleasantly surprised to see many tricks were easy and didn’t require large movements or steps. The initial comete from the top was very pleasing. Switching L/R comete on the nebula is a piece of pie. Crazy copter was simple as well. Cascades, slot machines, 540’s were all very snappy and quick. Most every trick was fast and satisfying.

I did have some issues with snags which lead me to believe, despite them being accessible, tricking was not the main focus of the kite. After some time flying precision and loopy-things with it I felt more at peace with the kite. With a bit more general flight time I went back to tricking and it was apparent that after you initiate the trick letting the Nebula do its thing gives better results than tending or finessing it.

In the lower winds, the Nebula was a great kite to fly. I would gladly fly the std Nebula in winds most other folks would fly a UL. While not floaty, the kite had plenty of drive and tricked very nicely. With a bit extra time with it in lower winds I was very comfortable trying nearly any trick with it or flying precision. I can only imagine how awesome a UL or sUL nebula would be, that would be a kite with a permanent place in my heart!

Summary
With some interesting construction and good craftsmanship, the Nebula’s flight compliments itself as a piece of artwork in flight, no doubt the prismatex helping. If inland winds bother you and you still want a solid kite, the Nebula is a good place to start, and perhaps stay.