This year I had the pleasure of attending the 78th annual Zilker Park Kite Festival put on by the Exchange Club of Austin. Bunnie and Dorsey Twidwell-Jackson serve as the organizers for the event. The Zilker Kite Festival is the longest running festival in Austin, Texas. It is also the longest, continuously running kite-making contest in America. Another wonderful thing about this event is that all proceed stay in the local community to assist with community projects. The City of Austin Parks and Recreation Department is a cosponsor for this monster event, which is an exercise in civic transportation. The main roads into Zilker close down at 8:30 am and all spectators are bussed into the park to get a glimpse of the action. The estimated crowd total for this years festival was 25,000 people. Zilker Park is 358 acres located in Central Austin along the Colorado River, with a spectacular view of the Downtown skyline. 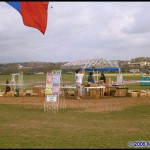 I arrived at 7:30 am to help with the setup with the assistance of my partner, Jeff Wiblemo. We met with Gayle Woodul and were given tasks to help with the setup procedures. The sky was a little overcast and the winds were blowing nicely. Before I continue, I want to take this opportunity to thank Gayle Woodul and Lori Moore. Without them I would not be able to have the details I do for this article and would have never known the joy of being a part of the Zilker Kite Festival. Gayle ran the demo registration, scheduling, flight order, staging, and general pit boss duties. Along with her assistant Lori, they made sure that there was never an empty sky when the demos were going on. 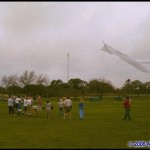 In the nice fresh morning wind, the kite fliers took the the field before the crowds began to show. The first kite in the sky was a Ghost Delta as a memorial to Mike Gillard, a long time kite enthusiast highly active in the sport kite community. When the kite was steady, “I Will Remember You” by Sarah McLachlan played. The crowd was quiet except for the sounds of singing and fond tears. After this song ended, Gayle reminded us that if you knew Mike, you knew he was a man who liked to have fun. On that note, she had one more song to be played “I Want to Take you Higher” by Sly and the Family Stone.

The north field was dedicated to kite demonstrations in the morning and the kite building in the afternoon. Kite fliers came from all over the big state of Texas and other surrounding areas to play. With our announcer Warren Harris on the mike, we were ready to start the show. The buggy brigade stared the kite fliers demos, with the favorable wind they were zooming around the field with ease. These gentleman would also step out from their buggies later in the day and show off their quad line abilities as well, flying Revolution kites. This group of gentleman included Stephen Hui, Steven Edley, Dano Wright, Doug Spear, Robert Bond, Joe Irby, and Jason Stasney.

When the buggies were done it was time for the individual demos to start. I grabbed my Fury .85 and got on the field ready to fly to “Bicycle Race” by Queen. Other demos would be flown by Chris Shultz, Steve Verberne, Troy Gunn (flying two kites), Jerry Hershey, and Trung Tran. Trung allowed Gayle the opportunity to pick what he was going to fly to, and I must say he flew that Sea Devil quite well to a little Metallica. The quad fliers would also rotate in the group, joined by Steve Ploof, and they showed their Revolution skills.

Through out the day we were honored with many colorful single line kites in the sky. Fliers included Brian Moore, Terry Sansom, Dorothy and Walt Mitchell, John Griffis, Marion and Richard Robertson, Gail and Dick Bell, and Jean Gore. For anyone whose name I missed, I apologize and thanks for adding to the colors in the sky.

The fighter kite demonstration was quite entertaining. Since fighters are small and hard to see by large crowds, they did this a little differently. The demonstration used delta kites with 100 ft of colorful crepe paper tails. This gave the audience the opportunity to see how nimble the fighters were as they cut the tail. The deltas were piloted by Cory Gray and Lesley Sheren, with the assistance of their ground crew Betty, Elliot and Gilles Roethlisberger, along with Benny and Nick Gray. Among the fighter kite pilots were Lori Moore, Mike Teague, Jason Stasney, Stephen Ploof, and Greg Wedeking. The furthest traveled award goes to Andy Selzer who joined us from New Jersey, and Tom Tonner from Wisconsin. Both coming to join us at Zilker, that’s pretty incredible! The fighters were doing what they normally do, cut each other out of the sky even more often than they were cutting the crepe tail. I guess old habits die hard. Despite a few fighters flying off into the distance and getting tangled in each other, it was quite fun to watch. The large pieces of crepe paper flying through the sky were beautiful followed by happy children wanting to catch them. 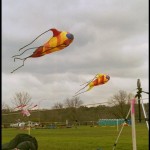 The south field was dedicated to inflatables. Susan and David Gomberg were there to fill the sky with color, and as always had HUGE beautiful kites. With the assistance of Richard Wells, Charlie Cullen, Rick Hawkins, Daniel Rojas, and Rob Cembalest, the large kites were wrangled as long as the wind allowed. The morning allowed for the best flight of these large giants. We were honored with the pleasure of Peter Lynn inflatables such as a colorful ray and several large multi colored fishes, There was also a garden of bouncing bugs and FuGus, and who can forget the flying starts. As the winds disappeared in the afternoon many of the large kites fell and were not able to get back up again.

After the fighters we got the pleasure of seeing team TKO. The performers on this team were Troy Gunn, Jerry Hershey, and Chris Shultz. They dazzled the crowd with their choreographed flight. The buggies came back on the field as we got ready for, what in my opinion, was one of the funniest demos of the day, and one that I will never forget. As I have been told, the “fishes” routine is a Zilker standard – the spectators know it’s coming and wait for it! The fish fliers were Jim Cox, Michael Boswell & Ron Schultz. 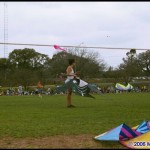 I got to fly quite a prestigious position, as the shark… As the routine started, I parked my shark to the side and watched the three fish fly to “Octopus Garden” by the Beatles. Suddenly the music changes, and it is the theme to Jaws. As my kite launches, you hear the oohs and ahs of the kids in the crowd. My goal is to do one thing, the thing you are never suppose to do, knock your teammates out of the sky. With giggles I chased the fishes, successfully taking one out. The music then changes back to “Octopus Garden” and it was time for the fish to get their revenge, as the shark belly lands to her end. Flying that routine just tickled my insides, as I must say it was one of the most fun things I have done with a kite.

The afternoon held just a few more demos as it was almost time for the kite building competitions to begin. Ron Schultz, our announcer Warren Harris, our youngest performer Deontae Boswell (just 7 years old!), and myself ended the demonstrations for the afternoon. 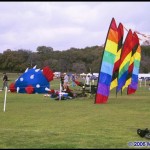 Looking around the field you can see the chaos which is just beyond the barriers of the demonstration field. There are kites EVERYWHERE, and lines EVERYWHERE. Kids are running madly in all directions laughing and trying to get their kites up into the air. There is something innocent when you notice that kids don’t realize that they have to put their back to the wind to get the kite up. They just run in whichever direction feels good to them. Lori witnessed one kid running in one direction with a kite flying well and at the same time, another kid ran by in the opposite direction and his kite was flying well too. Rather an odd sight, but all in the imagination of a child. The kite eating trees were well fed, full of colorful rip-stop nylon fluttering in the wind by the end of the day.

The competitions began that afternoon and they are a huge draw for the crowds. They started out with the 50 yard dash, where the participants need to run out 50 ft of line and keep their kite airborne. Next was the highest flying kite, each participant had 300 ft of line. There was also the steadiest kite, strongest pulling kite, smallest kite, most unusual kite, and largest kite competitions. The main requirement for all of these, was that the kites had to be handmade. After the competitions were complete, the day ended with a Mass Ascension.

All I can say about this event is, WOW what a day. I had a wonderful time at the 78th annual Zilker Park Kite Festival and can not wait to be there for the 79th. To all the new kite folk that I met at this event, my thanks for extending a warm welcome as I meet my kite family in Texas.

Good wind and great flight to all!