Take the largest kite festival you can find in North America and multiply the attendance on its busiest day by at least 10. Put this festival on the north coast of France, add in the World Sport Kite Championships (WSKC). Now to seal the deal, throw in an awful lot of wind on some days. With this mix of ingredients, you’ll end with the Berck-Sur-Mer kite festival, held this time April 9 – 17, 2006, possibly the largest kite festival in Europe and this year, it was celebrating it’s 20th anniversary. It’d beyond the scope of the article to cover every detail that was experienced in the 10 days we had at the festival, but this will give you a taste of what to expect should you decide to take it in yourself one year.

The festival itself began 20 years ago as a KAP (kite assisted photography) weekend gathering for the European enthusiasts (and, whoever else wanted to make the journey over). Slowly over the years, this tiny gathering has become a huge festival that stretches over 2 weekends and presents every single type of kiting on the planet for the tens of thousands of visitors to take in, whether you are there for buggying, KAP, quad teams, individual sport kite flyers and teams or, the spectacular displays of huge single line kites that fill the sky. Fighter kites, wind gardens, and kite history also make up this event and this year, the World Sport Kite Championships returned to Berck for another test of the world’s 16 best sport kite teams. 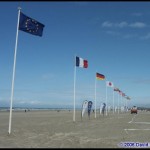 The event starts on Saturday morning, and the weekend is spent with demos by the various quad and dual lines teams that were at the festival. All of the WSKC teams provided demos throughout Saturday and Sunday which provided for an excellent opportunity for the teams to fine tune their ballets and adjust to Berck’s monster winds. While wind off the ocean always provides some of best kite flying to be found, when its strong, its really strong and all of the teams spent some time adjusting from wherever they typically fly. For nearly the entire 10 days, much of the flying time was over 10 mph and quite frequently past 20 mph. As well as the dual line teams that were there for the WSKC, there were also more than three quad flying teams assembled as well, including France’s FLIC (Four Line International Club), Germany’s Team 4 Fun and England’s The Flying Squad. Various groupings of the quad teams also provided atmosphere for a local dance troupes that performed in the centre of the main demo area over the weekends (see related REVisions article in this issue).

The middle of the week and much of the festival’s focus turned to the WSKC. 16 teams from around the world had assembled to spend 4 days going through compulsories the morning followed by a ballet performance in the afternoon. Originally this had been slated to take place over 3 days, however Thursday’s brisk winds (well, ok, 25mph+) were deemed unflyable by judges in the afternoon, topping out at over 40 mph and the final ballet was moved to Friday afternoon, much to the utter relief of all the contestants who had battled the morning winds. Judges for the event were taken from all of the participating organizations, with head judge duties rotating amongst the groups. The AKA provided John Barresi and Mike Huff while STACK provided Andy Taylor and John Mitchell (and the queen of field directors, Kathy Jarvis from England) and AJSKA provided Fumiaki Tatsuma.

Imagine the event from a judge’s perspective, they watched 16 teams run through 3 compulsory precision figures and a freestyle routine every morning, followed by a ballet performance in the afternoon, making for a 7+ hour day, and over course of the competition, 96 separate events to be judged to arrive at the final winners, which was tabulated using 240 separate score sheets, meticulously checked and put together by veteran scorekeeper Tracy Erzin, also of the AKA.

Awards on the final day of competition found Cutting Edge being crowned champions yet again, for the second year in a row, followed by Tame Bird in 2nd and Air-Rex of Japan taking third place. The scores of all the teams are listed on the WSKC web site and for some additional detail and coverage of these days, please take a look through the Kitelife Daily Updates that were posted to the web each day of the event.

The WSKC were wrapped up with a huge banquet/party held in town, where more than 300 people gathered to eat drink and be very merry till late into the evening. This was also where the winners of the WSKC were announced, after which the main floor area was cleaned, the dance music turned up and the real partying began. Dancers soon took over the floor in force, and broke only briefly to watch a stunning display of indoor flying put on by some members of FLIC late in the evening.if you could have seen the size of the space where Seb and company flew, you’d never complain about how small your usual indoor flying space is, especially when its tightly ringed by partying people.

The final weekend was much like the first weekend but with even more people and better weather. Consider that each day of the weekend (and due to Easter’s timing this year, it was a long weekend ) probably saw more than 100,000 people on the beach and promenade and then simply try and picture that. Some of the pictures we have included will give you a reasonable idea what this was like, or, picture a 110 x 110 yard flying field were the people are packed in 10 deep around the entire outside edge.

With the pressure off the teams, we had more demos by all of the WSKC teams and the quad teams were out as well, including Sunday’s Rev Mega Fly where an incredible 18 (yes, 18!) kites took to the air for two sessions of coordinated fun with the collected flyers, literally spelling out “20” with the kites in mid-sky a few times, much to the sheer delight of the crowds… Then with a few terse calls from the captain, formations would change and present a mirror image of the “20” so that spectators downwind could read it!

Saturday evening is usually the evening of a very spectacular night fly, however high winds and impending rain had pushed this off to the Sunday evening. Truly, the Berck night fly is a sight to be seen… With spotlights all over the shore, the night sky was filled with various flying creatures, soaring high above the beach. Huge inflatables hovered eerily over the beach while FLIC and several others provided some quad entertainment. Lit kites, glowing kites and the dancers entertained the crowds until the fireworks display finished off the evening. One thing worthy of note, the fireworks displays in France happen nearly directly over the crowd so if you have something against very bright flashes just over your head.