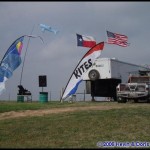 This small rural agricultural community in North Texas with a population of 250 welcomed this event for a great family fun time together. The nearby town of Mineral Wells, population 15,000 took this event in with open arms and got the word out through their local Chamber Of Commerce, 88.5 FM local radio station and the Mineral Wells Index newspaper.

The Jack County, Texas Commissioners office enacted April as “Go Fly A Kite” month. This proclamation has since been signed by Texas Governor Rick Perry. TKO Sport Kite Team under the leadership of Troy Gunn of Wichita Falls, Texas encouraged park owners Kevin McGrath and Doris Reed to begin the process of a new Texas Kite Festival early in 2005. Troy stated early on through email correspondence “Believe it or not, I’ve driven by your park before several times driving down 281 to Austin from Wichita Falls (Where I live).” “I always thought that it would be a nice little park for a small kite festival.” Finding this to be a huge responsibility getting this type of a national event in a such a small community, Troy’s help and enthusiasm were very welcome. Words of encouragement, along with wonderful experience and wisdom was also provided by Stan and Gloria Harmon with “Rainbows4Sale” and operators of the Kitemobile from Waxahachie, Texas.

The months of preparation and planning did pay off as the attendance in this small community and by the kiting world was quite exceptional for a new AKA event. Several hundred were in attendance for this new kite festival. AKA’ers were offered free festival admission, discounted cottage rental, 50% RV site costs and free tent camping. Adult festival visitors were asked to bring as many kids as they could safely watch over for free childs admission. One senior from Denton, Texas, brought in a car load of challenged kids so they could get some hands on professional experience on kite flying. Free tee shirts were provided by local Jacksboro oil company Grable Oil to the AKA kiters with monster sized “VOLUNTEER” words across the back.

As members of AKA, the park owners had been advised that the kiters would be pleased to help develop interest in a young heart and mind. This happened not with just the young, but with the old. One person in attendance said it looked like “Grandparents Day” on the fly field. It appeared, the seniors were having as much fun as the kids. Kevin and Doris hand made and created awards in 12 different categories for the AKA “FUN FLY” sanctioned event. Knowing that the win of a ribbon or a trophy is great, but how much greater is the joy of knowing a person worked and hand made this trophy just for you as the winner.

Of course, there were the traditional Oldest and Youngest Kiters won by George Mothersole age 79 and Garret Bernet age 2. Biggest Kite and Smallest Kite winners were also given whimsical trophys designed with colorful bendable toy characters flying their kites. Most Beautiful Kite, Longest Kite Tail, and Most Colorful Kite trophy’s were also highly sought after and won by children in attendance. Kids 50 Yard Dash With A Kite was won by Caylee Dirth. Best Stunt Kite Demo was won by Chris Shultz from the TKO Sport Kite Team. New Tech was selected by the judges for The Most Impressive Team Ground Display, and Most Impressive Individual Ground Display was awarded to Jewel Of The Sky.

Community involvement was increased when Troy Gunn made an early appearance at the park two days in advance of the scheduled “Fun Fly”. Troy made this special appearance with some of his sport kite equipment for a private showing for the “Times Record News” serving Wichita Falls. This being Troy Gunns home city, the newspaper was interested in doing a front page feature article on Troys kiting accomplishments. This proved to be an added bonus for Mitchell Park guests visiting the park that day. Troy asked park owner, Kevin to go out and stand in the fly field. Kevin later said that he would not have done as instructed had he known what was about to happen. Troy sent his sport kite straight up and brought it down at about 60 miles per hour and landed it on Kevin’s head without a whisper of hesitation. Troy later made a similar maneuver and knocked the hat off of Kevin’s head. This front page article in the Wichita Falls newspaper added to the interest for the Perrin community with greater involvement and attendance. 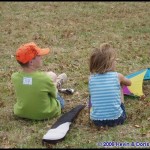 Frequent visitors to the park are Barbara and Jack Parker from Cool, Texas and avid owners of restored antique vehicles. The Parkers were instrumental in having many of their fellow enthusiasts bring their fine pieces of machinery to The Cloud Buster Kite Fest for display and for “Peoples Choice” awards. This event was well received by the young and the old as an added feature to view these beautiful autos of yesteryear. The village of Perrin is “Out In The Middle Of Nowhere” as most would say upon entering the gates of this beautiful 175 acre park.

Food and novelty vendors were on site during the kite fest to ensure everyone would have a good time eating while flying their kite. The Mineral Wells Chapter of Kiwanis served up pancake, sausage and bacon breakfasts every morning. These breakfasts were provided free to all children with a generous donation by a member of the Kiwanis. Their purpose is to raise money for local youth programs. They were pleased with the response and will be back in 2007. In addition, live entertainment was provided for everyones enjoyment in the afternoon by local artist Troy Stone. The music continued into the evening with an old fashioned hoe down in one of Mitchell Resorts buildings.

Since their purchase of this park, owners Kevin and Doris from Seattle Washington have added 19 cottages, built an ingound swimming pool and a nine hole par three golf course. RV sites have been enlarged and improved. The roots of this 30 year old park are back when the Mitchell Family hosted Bluegrass Festivals. Raising five children here while enjoying the musical talents of their own family and invited performers. New owners Kevin and Doris had been retired since 1997. In September of 1997, Kevin and Doris left Seattle on their 1981 55′ Cheoy Lee Long Range Cruiser that they had purchased for “The Adventure Of A Lifetime”.

After cruising 17,000 nautical miles down the Pacific Coast, across the equator, transiting the Panama Canal, seeing the Caribbean, Eastcoast waterways, Chesapeake, Florida Waterways and the Florida Keys, they sold the boat in Fort. Lauderdale and purchased a motorhome for a land adventure. Early into this land adventure it was becoming clear that they were ready to stop and become part of a community and have a mission and purpose once again. Boredom had set in and therefore the next adventure was about to happen. They began the pursuit of the purchase of an RV park. After traversing the entire U.S. from east to west, north to south, Perrin Texas became the next home and adventure. In January of 2003 their new life began as campground owners. It was time to put Perrin, Texas and Mitchell Park on the map. The mission began and has not stopped since. 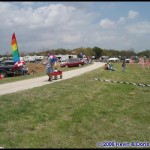 A 28 acre field of coastal hay was groomed for this new park event. Armadillos were chased with golf clubs, on foot and by cart. They were encouraged to leave the field and seek a home elsewhere. Their holes were found and filled. The coastal hay was cut short and maintained for this new adventure soon to become the world famous Cloud Buster Kite Fest. This area proved to be a fine kite field to fly your kite as it was unobstructed with trees, utility poles and the normal hazards to a field. The field is also lined by a 1/2 mile gravel road so kiters could take their bag of tricks right to the flying area. Locals also enjoyed the ease at which they could get to the field to fly their kites or just open up a folding chair and get comfortable for a day of looking up and watching the sky. Kyle Wilson, from Mineral Wells, heard in 2005 about this upcoming day to fly his kite in Perrin. He continued to monitor the progress of the planning and exposure to his community of Mineral Wells. After the two day event his said he had been given the chance to fly the sport kites with the pros in one of their ballets. He said it gave him goose bumps just reflecting back on this great moment in his life.

One of the visitors camping in the park and enjoying the kite fun was Austin Henard, 13, of the nearby community of Weatherford. He and his camping buddy Kyle Church won the trophy for The Most Unusual Kite. Weather was proving to be somewhat of a challenge on Saturday with wind gusts in the 30+ MPH range. Steady winds did allow for some high excitement. Austin and Kyle’s kite was not so different as it had been purchased from the Kitemobile vendor, but what was recognized by the judges was the unusual nature of their kite flying. Their kite was released with 3500 feet of line into a distant sky. It became difficult to track and was written off by most in attendance as irretrievable. Due to the heavy winds and injury to the boys hands, the kite line was tied to the back of a pick-up truck for the duration. Ultimately the boys did bring the kite home to the fly field, whereby they were given the award for the Most Unusual Kite. Austin and Kyle were all smiles as they commented about how much fun they were having. Comments like these and by many other visitors to the park have inspired park owners to continue making this event a very special AKA kite festival.

The park sponsors Bluegrass Festivals, holiday family weekends with games and awards as well as a chili cook-off to benefit the local volunteer fire department. Most of these events are attended by a regular client base built over the years. However, owner Kevin McGrath states ” in no case have we had so many people stop at the office on the way home to tell us “we’ve never had so much fun”, as we did at the Kite Festival.”. Kevin and Doris are committed to this community and to the AKA kiting community to make this festival as good as it can get. Stay tuned for 2007 and the Second Annual Cloud Buster Kite Fest in Perrin, Texas.

See ya’ll in the skies,